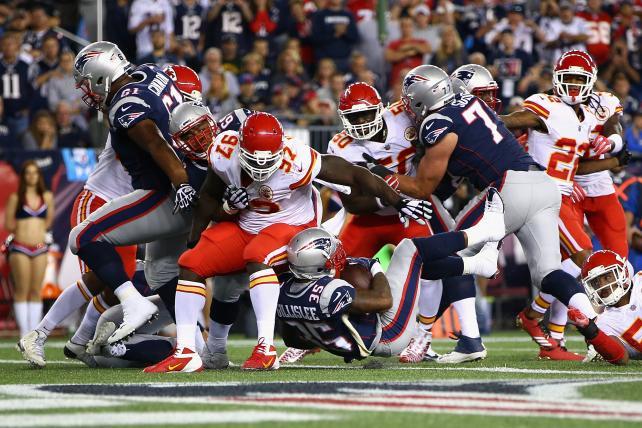 Mike Gillislee of the New England Patriots rushes for a 1-yard touchdown during the third quarter against the Kansas City Chiefs at Gillette Stadium on Thursday.
Credit: Adam Glanzman/Getty Images

The first game of the 2017 NFL season got rocked by Hurricane Irma.

NBC's broadcast of Thursday night's NFL Kickoff Game drew a big crowd, but the turnout was down considerably compared to the year-ago results. According to Nielsen live-plus-same-day data, Kansas City's shocking rout of Tom Brady and the New England Patriots averaged 21.8 million TV viewers, down 13% compared to the 25.2 million fans who tuned onto last fall's Panthers-Broncos opener.

When digital streaming via the NBC Sports app, NBCSports.com and other platforms is factored into the final audience totals, another 355,000 viewers took in the game away from the tube. All told, the Chiefs-Pats showdown averaged 22.2 million viewers.

The game drew a 12.6 household rating, which marked a 14% decline from last year's opener. That makes it the lowest-rated Kickoff Game since 2008, when the New York Giants-Washington slugfest started early (7 p.m. EDT) to accommodate the Republican National Convention.

While the ratings drop wasn't exactly the sort of news the NFL was hoping would emerge from last night's broadcast, it's difficult to overstate the impact Hurricane Irma had on NBC's deliveries. As the category 5 storm ravaged the Caribbean and began making its way north to Florida, the Weather Channel averaged 2.23 million viewers opposite the game. At this time last year, the Weather Channel drew just 175,000 viewers; in other words, its Irma-fueled ratings were 13 times higher than they were on Sept. 8, 2016.

CNN's coverage of the calamity also took a bite out of NBC's football numbers, as Anderson Cooper's two-hour program averaged 1.84 million viewers between 8 p.m. and 10 p.m. EDT. On the analogous night one year ago, Cooper's show averaged just 871,000 viewers.

Viewers who did tune into the Cheifs-Pats game were treated to a stunner. Kansas City shocked the defending Super Bowl champs 42-27 in an effort that saw the visiting team ring up the most points and yards of offense (537) against a Bill Belichick-coached team. Patriots quarterback Tom Brady had an uncharacteristically miserable night, completing just 16 of 36 passes for 267 yards and zero touchdowns.

While Sunday's NFL games are almost certain to feel the squeeze of Irma -- the hurricane is expected to make landfall in the Florida Keys on Sunday morning -- the ratings are still expected to be strong. Fox's late national game features the Seahawks and Packers, while NBC's first "Sunday Night Football" broadcast of 2017 features the Giants, who represent the nation's No. 1 DMA, and the Cowboys, the NFL's most-watched franchise.

ESPN kicks off its "Monday Night Football" slate on Sept. 11 with its annual doubleheader. This year's twofer features the Saints and Vikings and the Chargers and Broncos. Later in the week, NFL Network primes the pump on "Thursday Night Football" with a Texans-Bengals telecast.