It's the NFL's World; the Rest of Us Just Live In It | Ad Age
Skip to main content

It's the NFL's World; the Rest of Us Just Live In It 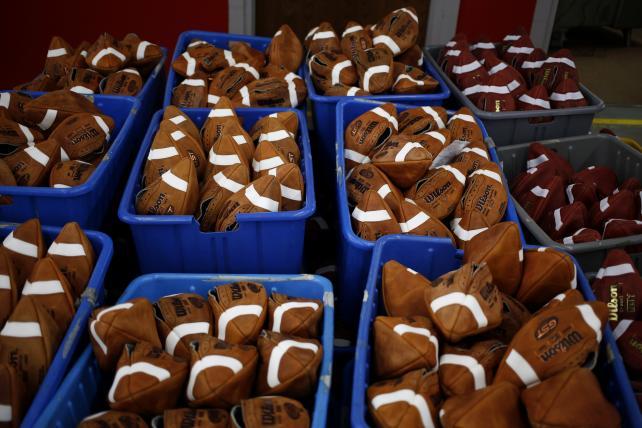 Bins of footballs before being laced up at a Wilson Sporting Goods Co. factory.
Credit: Luke Sharrett/Bloomberg

NFL advertisers got their money's worth this season, as ratings for TV's last great reach vehicle grew even bigger than they were a year ago.

In the lead-up to the golden anniversary Super Bowl, four of the five national NFL packages saw year-over-year ratings gains, capping yet another hegemonic season for the league. Over the course of the 2015 campaign, 19 NFL broadcasts delivered an average audience of 25 million viewers or greater (up from 15 a year ago), eclipsing all other regularly-scheduled programming. By way of comparison, the most-watched episode of non-NFL TV was the Jan. 5 installment of CBS's "NCIS," a special crossover with "NCIS: New Orleans" that scared up 19.0 million viewers.

In terms of the individual network packages, Fox retained bragging rights as the biggest draw, as its eight-game late national showcase delivered 27.4 million viewers and a 15.7 household rating, up two-tenths of a point from last season's 15.5. When Fox's early Thanksgiving Day broadcast (Eagles-Lions) is factored into the mix, the network averaged 27.2 million viewers and a 15.3 household rating, flat versus its Turkey Day-inclusive numbers of a year ago.

All told, this was Fox's second strongest season since it became an NFL rights holder back in 1994. Seven of Fox's nine national NFL broadcasts delivered a 15.0 rating or better; to put that into context, the sixth and final game of the 2015 NBA Finals did a 13.4. This marks the seventh consecutive year "America's Game of the Week" closed out the season as TV's top-rated program, a run that would seem to justify its positioning as the priciest ad buy on TV.

When regional games are rolled into the results for the network's national windows, "The NFL on Fox" averaged 20.8 million viewers and a 12.0 rating.

CBS also delivered on its acrophobia-triggering ad rates, as its overall Sunday "NFL on CBS" package was its most-watched slate in 29 seasons. Regional and national game coverage delivered an average audience of 19.1 million viewers and an 11.1 rating. Moreover, the network's 4:20 p.m. games continue to be TV's second most-watched and highest-rated program; including its mid-afternoon Thanksgiving Day broadcast (Panthers-Cowboys), CBS's nine-game showcase averaged 25.9 million viewers and a 14.6 household rating, flat versus its year-ago deliveries.

While household ratings are the coin of the realm (all guarantees to advertisers in top-tier sporting events are made against the old-fashioned metric, rather than the 18-to-49 demo), NBC did manage to wrest back bragging rights for its deliveries of younger viewers from AMC's "The Walking Dead." "Sunday Night Football" this season posted an 8.0 rating among the 18-to-49 set, topping the zombie serial's eight-episode average (6.7). "SNF" also ran roughshod over broadcast's top-rated scripted series, besting "Empire" and its 4.8 live-same-day average by 67%.

NBC was helped immeasurably by a much more competitive slate of games in the first three-quarters of the season, when 10 of 14 games were decided by a touchdown or less. (A year ago, only two "Sunday Night Football" games were settled by seven points or fewer.) Blowouts at the tail end of the season threw the averages out of whack, but NBC still closed out its 19-game slate with an average margin of victory of 14.4 points, down from 17.3 points in 2014.

"Sunday Night Football" also accounted for 13 of the 15 most-watched programs on TV this fall, with the Bears-Packers Turkey Day night game (27.8 million viewers) edging the season opener matching AFC rivals New England and Pittsburgh (27.4 million) for the top spot on the list. The only two shows not aired by NBC: CNN's presentation of the Sept. 16 Republican debate (23.1 million) and the Sept. 17 opener of CBS/NFL Network's "Thursday Night Football." The Broncos' 31-24 victory over the Chiefs averaged 21.1 million viewers, of which 16.9 million fans tuned in via CBS.

Toss in the eight standalone NFL Network telecasts from the latter half of the season (a schedule that included two low-TV usage Saturday night games and a Christmas Eve skirmish between the mathematically eliminated Chargers and Raiders), and the overall CBS/NFLN "Thursday Night Football" showcase averaged 13 million viewers and a 7.9 household rating, up 4% versus last season's 7.6.

Lastly, ESPN's "Monday Night Football" experienced a negligible slide, dipping to a season-average 12.9 million viewers and an 8.1 household rating, down a smidge from last season's 8.2. Without the luxury of flexing out crummy matchups, ESPN was snakebit by a few low-wattage pairings; perhaps the least compelling being the Nov. 30 collision between a ravaged 4-7 Ravens team and the 2-9 Browns. (The Dec. 21 Lions-Saints game also was nobody's idea of a good time.)

For all that, ESPN closed the door on its regular-season coverage with its biggest deliveries of 2015, drawing 15.8 million viewers and a 9.4 household rating with its coverage of the Bengals-Broncos battle on Dec. 28. The network kicks off its second-ever playoff game with the Jan. 9 Wild Card matchup between the Houston Texans and Kansas City Chiefs. The game will be simulcast on ESPN sibling ABC, with both outlets set to carry identical commercial loads.

As was the case a year ago, when the new NFL contracts kicked in, NBC will broadcast two playoff games, including Sunday afternoon's Vikings-Seahawks rumble and the Jan. 16 Divisional Round showdown in Arizona. CBS picks up a bonus Divisional Round game, alternating with Fox, which got the extra broadcast a year ago, bringing its total postseason haul to four playoffs and Super Bowl 50.

Oh, and as a reminder to deep-pocketed movie studios and other last-minute shoppers, there are still one or two slots left in the Big Game.