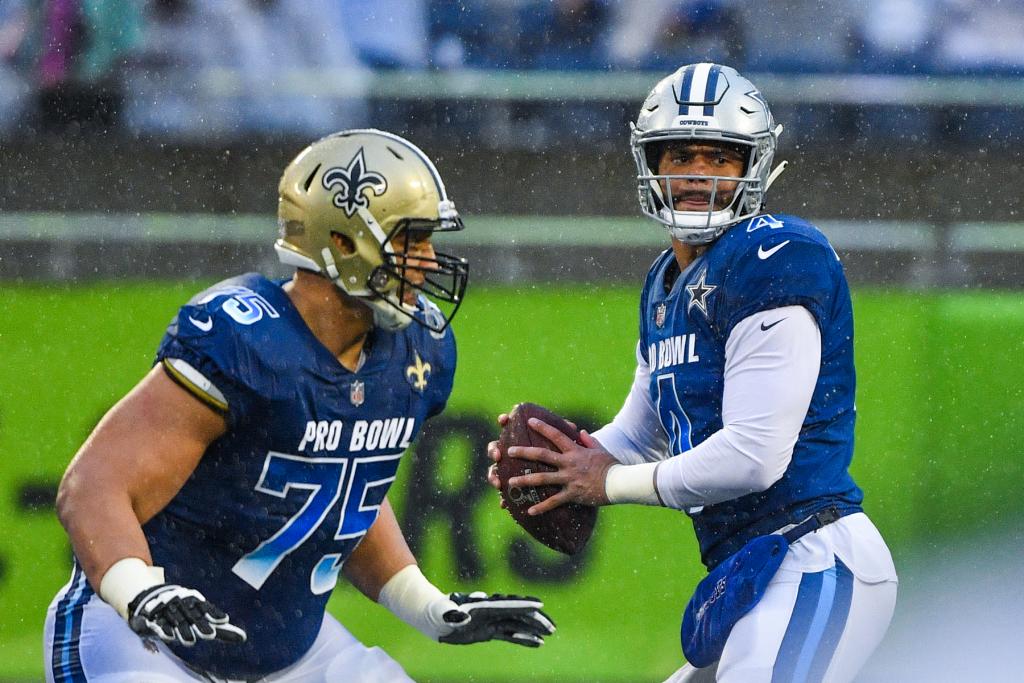 Dak Prescott of the Dallas Cowboys directs his steely gaze downfield during the 2019 NFL Pro Bowl.

In a daylong process that included leaks both real and fabricated and at least four hours of primetime analysis on the cable sports networks, the National Football League on Wednesday released the full TV schedule for its 2019 season. Having boiled down the final roster from a database of 500,000 possible permutations, the NFL effectively has provided its network partners with the list of dates on which they can expect to generate the most revenue during the coming broadcast season.

No NFL rights-holder will rake in more in-game ad dollars this year than Fox, which not only boasts the most games in national broadcast windows (20) but also may look forward to the inevitable windfall provided by its presentation of Super Bowl LIV. Sheer volume and Big Game largesse aside, the overall strength of the Fox schedule should allow the network to negotiate single-digit CPM hikes for its NFL inventory.

If you’re a marketer and reach is of vital importance to your fall media plan, three things in particular all but jump off the page when you look over the Fox TV schedule.

Thing One: Fox has dibs on what is perhaps the most anticipated regular-season game of the season, a rematch of January’s NFC Championship Game that saw New Orleans get shanked by a pass interference call that never materialized. A revenge game that pits the wily rifleman Drew Brees against the Rams’ young field marshal Jared Goff, this Sept. 15 pairing features two teams that last season combined to average 20.8 million viewers and a 12.2 household rating in their national Sunday afternoon appearances on Fox.

Thing Two: “Every three years, the NFC East plays the NFC North,” says Mike Mulvihill, Fox Sports’ exec VP of research, league operations & strategy. “This is one of those years, and we have all of those games.” Showdowns between these two old-school conferences tend to put up massive ratings; for example, back in October 2016, Fox’s Cowboys-Packers broadcast delivered a towering 28 million viewers and a 15.8 household rating. This year’s Green Bay-Dallas clash airs in Fox’s key Sunday afternoon window on Oct. 6.

Thing Three: Including a late-season “Thursday Night Football” date in Chicago, Fox in 2019 will carry no fewer than six Cowboys games. Although it’s not entirely clear how one would go about qualifying such a claim, one of these games, a Nov. 24 matchup between Dallas and the New England Patriots, may go on the books as the most hate-watched program to air on broadcast TV since the inauguration. At any rate, the Cowboys and the Pats last year were the two highest-rated franchises; barring an unforeseen catastrophe, the Nielsen deliveries for this will reflect the outsized interest in both teams.

Speaking of Dallas, Jerry Jones’ charges will be all but inescapable in 2019. Set to feature in a league-high 10 national broadcasts, the Cowboys will once again appear in more marquee games than any other franchise. The team’s ratings justify their Seacrestian ubiquity; per Nielsen live-plus-same-day data, Dallas averaged an unmatchable 21.1 million viewers and an 11.7 household rating over the course of its 11 coast-to-coast airings this season. By way of comparison, the season’s most popular scripted series, CBS’s “The Big Bang Theory,” is currently scaring up 12.9 million viewers and a 7.8 rating on Thursday nights.

Also monopolizing your screens this fall will be the Pats, with nine national games in the hopper, the Chicago Bears (8), the Rams (8), and Green Bay, Pittsburgh, New Orleans and Philadelphia. Each of the latter four squads will appear in seven national broadcasts.

If most of the usual suspects will be well-represented this fall, one traditionally lousy team has seen its perceived value soar after making some key off-season acquisitions. Two years after amassing a far-from-perfect 0-16 record, the oft-beleaguered Cleveland Browns now find themselves among the most hyped franchises in the NFL. Having picked up superstar Giants wideout Odell Beckham Jr. to complete the circuit with the howitzer-armed Baker Mayfield, the Browns have so improved their standing that the league has awarded them no fewer than six national TV dates, of which four are primetime games.

The Browns’ upgrade marks a huge turnaround for the team, which hasn’t played in a nationally-televised primetime broadcast window since 2008. Of late, no NFL team has been shut out of the national spotlight as often as the Browns, which were afforded a mere nine national TV windows over the course of the last seven years. During the same stretch, the Dallas Cowboys were featured in 74 such games.

While the Browns emerge blinking into the largely unfamiliar TV limelight, the rest of the NFL’s historic underachievers remain backstage. Or, to mix and mangle a metaphor, if the NFL were a cruise ship, Dallas, Green Bay, Pittsburgh and New England would be having their drinks comped on the Lido Deck, while the Bills, Bengals, Dolphins, Cardinals and Titans would be shoveling coal down in the engine room.

If Fox last season enjoyed its tenth straight year as the home of the most-watched, highest-rated program on TV, CBS in 2019 has come as close as it ever has to toppling its rival. The Eye Network’s nationally-televised eight-game Sunday NFL window averaged 21.7 million viewers and a 12.5 rating, putting it at around 500,000 viewers and three-tenths of a ratings point shy of Fox. Those deliveries marked a 5 percent improvement compared to the year-ago numbers, a lift that was consistent with the NFL’s season-long gains.

While CBS once again drew its largest audience with the latest installment of the Steelers-Patriots rivalry, its NFC offerings were no slouch in the ratings department. The NFL’s cross-flex rules have enabled CBS to carry more games outside its AFC-centric package, and the combination of bigger media markets—eight of the nation’s 10 largest DMAs are represented by NFC clubs—and arguably higher-level play has helped CBS in its quest to close the gap with Fox.

With NBC having spirited away this year’s Steelers-Pats battle, CBS’s most-promising late-season offering looks to be the Chiefs-Patriots shootout on Dec. 8. Earlier in the fall, CBS will lean more heavily on cross-flex games, including a few all-NFC pairings (Saints-Seahawks on Sept. 22, Vikings-Bears on Sept. 29), and the inter-conference hybrids that are Cowboys-Jets on Oct. 13 and Pats-Eagles on Nov. 17.

That latter game is another one for marketers to keep an eye on, as it marks the first meeting of these two teams since Philly vanquished New England in Super Bowl LII. Eagles savior Nick Foles has since decamped to Jacksonville, leaving Carson Wentz to lead the birds against the exasperatingly ageless Tom Brady. If they can keep things as tight as they were in Minneapolis two years ago, the Eagles and Pats should help marketers shift millions of hamburgers, soft drinks, pickup trucks and insurance policies.

Nothing in primetime can lay a glove on “Sunday Night Football,” which week in and week out dwarfs every other scripted series and reality show. Last year the Peacock grew its NFL deliveries 7 percent, averaging 19.2 million viewers and an 11.0 rating, while beating the pants off the rest of the primetime pack with a 6.1 in the 18-49 demo. That’s 135 percent higher than the 2.6 demo served up by the top-rated entertainment program (Fox’s “The Masked Singer”), and goes a long way toward explaining why the game’s average unit cost last season was nearly $700,000 per 30-second spot.

Unless the It Boys from Cleveland turn out to be more over-hyped than the nerd soap opera “Game of Thrones” and Pittsburgh discovers that it can no longer function without wide receiver Antonio Brown, NBC’s pro football schedule seems likely to be entirely free of duds, groaners and tragic missteps. The season kicks off on Sept. 5 with a salute to the NFL’s 100th anniversary (the participating Packers and Bears have been embroiled in a heated rivalry for 98 of those years) and never really loses steam from there. The aforementioned Steelers-Pats hatefest promises to light it up in the Sunday night opener, and subsequent games should keep things lively through December.

In terms of bang for your marketing buck, the Sept. 29 Cowboys-Saints broadcast should reach north of 20 million viewers, while the Oct. 27 Packers-Chiefs game could offer fans their only chance to watch Aaron Rodgers square up with Patrick Mahomes. In keeping with the 100th-anniversary theme, the rare Green Bay-Kansas City pairing also functions as a callback to the very first Super Bowl.

Advertisers should also take a long look at the Nov. 17 Bears-Rams game, an arrangement that promises to serve as a real-world demonstration of the old irresistible object-immovable force paradox. Although you wouldn’t know it from watching Super Bowl LIII, the Rams were the NFL’s second-best offensive unit in 2018, scoring 32.9 points per game while amassing 6,738 total yards in the air and on the ground. The Bears, for their part, boasted the league’s stingiest defense, giving up a miserly 17.7 points per outing. From our vantage point seven months out, there is no downside to this game; in its five national appearances, Chicago was the NFL’s second-most-eyeballed team, while L.A. ranked eighth.

Water under the bridge

If this year’s “Monday Night Football” is anything to go by, ESPN President Jimmy Pitaro seems to have smoothed things over with the NFL. Pitaro, who took the helm at Bristol’s sports juggernaut after longtime boss John Skipper stepped down in late 2017, has made a priority of improving the network’s relationship with the league, which had been banged up quite a bit during the previous administration.

A little diplomacy can go a long way, and although ESPN remains saddled with a decidedly unfavorable NFL contract—despite paying nearly $1 billion more per year than NBC spends on its primetime package, the cable network is the low man on the TV totem pole, getting last dibs on its regular-season schedule “asks” while being limited to a single playoff game—this year’s lineup should get the job done for the likes of Burger King, Geico, Ram Trucks and halftime show sponsor Genesis.

More specifically, ESPN has doubled down on some of last season’s biggest draws, slotting the No. 4 Steelers, No. 5 Packers and No. 7 Saints in two games each. The network also has ordered up a pair of Browns matchups, including a Sept. 16 collision with the Jets that will mark former Steeler Le’Veon Bell’s first crack at his old AFC North rivals in two years and serve as ex-Giant Odell Beckham Jr.’s splashy return to New York. Old beefs and homecomings aside, the Browns-Jets game also pits the No. 1 draft pick against the third choice as Cleveland’s Baker Mayfield suits up against Sam Darnold.

Of the 17 scheduled “Monday Night Football” games, the most alluring is the inter-conference curiosity that is the Dec. 16 Colts-Saints shootout. After sitting out the entire 2017 campaign with a bum throwing shoulder, Indy’s Andrew Luck last season connected for 39 touchdown passes while accumulating nearly 5,000 yards via the air. His Crescent City counterpart, Drew Brees, also had quite a year, completing a record 74.4 percent of his passes while steadily advancing upon the wrong side of age 40. As with Rodgers and Mahomes, Luck and Brees are unlikely to meet again unless they happen to cross paths in the Super Bowl, so this one could be special.