READ THIS NEXT
MyPillow plans to pull ads from Fox News 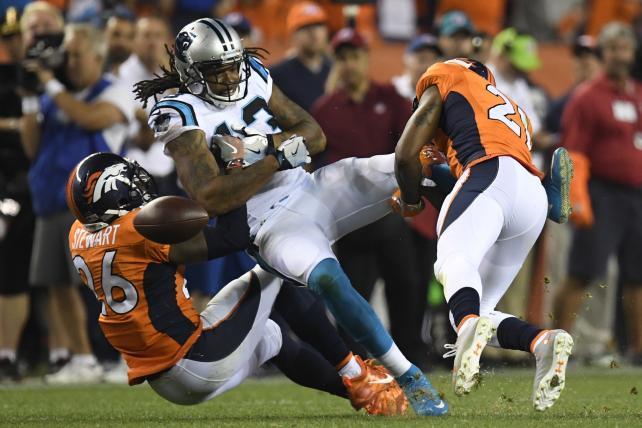 Kelvin Benjamin of the Carolina Panthers is pummeled by the Denver Broncos' Darian Stewart and Aqib Talib during the fourth quarter of the Broncos' 21-20 win on Thursday.
Credit: Helen H. Richardson/The Denver Post via Getty Images

The cost of buying commercial spots in live NFL broadcasts is pricier than it has ever been, and yet available in-game inventory all but flew off the shelves in the run-up to the 2016-17 season.

According to national TV buyers, the going rates for ad units in this season's NFL games are at an all-time high, despite the fact that last year's prices were already up in the stratosphere. On average, the networks that carry NFL games secured rate hikes of around 8% versus their year-ago unit costs, although NBC is said to have secured slightly greater increases than its peers.

For the sixth year running, the most valuable unit in primetime is a 30-second spot in NBC's "Sunday Night Football." Marketers looking to take advantage of the reach afforded by NBC's pro pigskin showcase are paying on the order of $717,375 per unit, with late scatter buys and slots in marquee matchups like the Sept. 8 NFL Kickoff game fetching appreciably higher rates.

NBC is also making a killing on its new five-game "Thursday Night Football" package, which kicks off on Nov. 17 with an NFC South battle between the New Orleans Saints and Carolina Panthers. Unlike its "SNF" units, which are not uniformly priced, the rates for NBC's Thursday night quintet effectively were non-negotiable. "They asked for $560,000 per :30, and that's exactly what they got," said one TV buyer. "There wasn't any wiggle room on their price."

As one might expect, automakers came out in droves for Thursday night's re-staging of Super Bowl 50, as car manufacturers accounted for more than a quarter of NBC's overall sales tally. Newly-minted official NFL truck sponsor Ford ponied up for a pair of 30-second spots for its F-150 pickups -- football fans, prepare yourselves for yet another season of Denis Leary yelling at you about aluminum alloy bodies and government five-star ratings -- although legacy auto sponsor Hyundai sat out the opener. Hyundai corporate sibling (and sponsor of NBC's "Sunday Night Kickoff" pre-game segment) Kia splurged on three :30s in support of its 2017 Sorento, while Mercedes-Benz, Jeep, Chevrolet, Toyota, Volkswagen and BMW also invested in their own in-game spots.

Part of the enduring appeal of "Sunday Night Football" lies in its unmatched reach in primetime. According to Nielsen live-same-day data, last season's Sunday night slate averaged a staggering 22.5 million viewers and a 13.0 household rating, which marked a 5% increase from the prior season. Whereas every high-profile scripted series last season suffered significant ratings erosion -- TV's top-rated drama, "The Walking Dead," saw its C3 numbers drop 15%, while the No. 1 comedy "The Big Bang Theory" fell 14% -- "Sunday Night Football's" growth suggested that the NFL may well be the last remaining TV property that is immune to the ravages of time-shifting/cord-cutting/millennial drift/Netflix-and-chill.

Of course, "Sunday Night Football" is hardly the only game in town. In fact, it's not even the highest-rated NFL package, if you compare it to the Fox and CBS late-national games that kick off at around 4:20 p.m. ET on alternate Sundays. Last season, Fox's NFC-heavy slate averaged a whopping 27.4 million viewers and a 15.7 household rating, making it the most-watched, highest-rated show on TV, while CBS's complementary package was no slouch itself, with an average draw of 25.1 million viewers and a 14.6 household rating. By way of comparison, Game 7 of this summer's riveting NBA Finals drew a 15.8 household rating on ABC.

Given the huge numbers that Fox and CBS post on autumnal Sunday afternoons, the going rates for commercials in their respective late-game packages are predictably elevated. According to buyers, Fox is charging around $741,811 for each 30-second increment in its eight-game juggernaut, which is replete with appearances by the NFL's two top-rated teams (Packers, Cowboys) and the Cardinals, who football junkies say have a real shot at representing the NFC in Super Bowl LI. CBS, for its part, is charging around $684,412 a pop for time in a stack of games that includes a clash of AFC antagonists New England and Pittsburgh and a Christmas Eve Cardinals-Seahawks scrum that has "playoff implications" stamped all over it.

As for the Fox and CBS games that kick off at 1 p.m. ET, pricing is more fluid and depends on individual match-ups, market size and household penetration. In other words, Fox charged a higher rate for time in its Sept. 11 Packers-Jaguars game, which is scheduled to air in as many as 34 states, than it did for its regional coverage of the Bucs-Falcons game. On average, :30s in the 1 p.m. broadcasts on both networks are priced at around $400,000 a throw, although that rate is said to swell to as much as $500,000 per spot in widely disseminated broadcasts like the aforementioned Packer-Jags game.

As for the remaining primetime packages, spots in ESPN's "Monday Night Football" are fetching as much as $465,000 a pop, while CBS's slimmed-down Thursday night offering is pricing in the neighborhood of $500,000. "Monday Night Football" last season averaged 12.9 million viewers and an 8.1 household rating, down a tenth of a point versus its 2014 deliveries. CBS's eight-game slate of Thursday night games, which were simulcast on NFL Network, drew 17.5 million viewers and a 10.9 rating.

Individual units aside, the key sponsorship positions in the various pre-game, post-game and halftime shows have been renewed by the marketers who held them a year ago. For example, Kia has returned for its third year as the sponsor of "Football Night in America's" "Sunday Night Kickoff" segment, while Toyota is back for its eleventh season of sponsoring the "Monday Night Football" halftime show and Ford is revving up for another stint in support of Fox's one-hour pre-game program "The NFL on Fox."

Despite the higher cost of doing business with the NFL's broadcast partners, enthusiasm for in-game inventory shows no sign of cooling off. At this time a year ago, around 90% of all broadcast primetime units already had been snapped up by advertisers; this time around, the sell-out rate is closer to 95%. Naturally, the relative scarcity of available airtime will only elevate scatter pricing.

That NFL broadcasters are on pace to eclipse last season's torrid ad sales market is particularly remarkable in the absence of two of the sport's biggest backers. The daily fantasy sports firms FanDuel and DraftKings, which in 2015 combined to spend an estimated $107.4 million on in-game NFL inventory, sat out the upfront entirely and are not expected to buy any high-end spots in scatter. (DraftKings told Advertising Age that in lieu of pricey in-game spots, it would concentrate on buying spots in relevant shows such as ESPN's "Fantasy Football Now" and NFL Network's "NFL Fantasy Live," as well as in various pre-game shows. FanDuel, which last season was the tenth-heaviest NFL spender, appears to be adopting a similar strategy. Both brands appeared in Thursday night's "Football Night in America" kickoff special but neither popped up during the game itself.

Another advertiser that is said to have curtailed its NFL spend is Nissan, which last season spent $81.4 million on in-game inventory, making it the league's No. 4 auto brand and the No. 9 marketer overall. Already the biggest backer of college football among its category, Nissan is said to be shifting away from more expensive NFL buys in favor of an even more dynamic Saturday game plan.

"The question is, Do you have to buy four or five deep in the NFL? In other words, do they really need to spend on every single package that's available to them?" mused one network sales boss. "They are not out of the NFL altogether, but they do seem to be paring back on their obligations in order to go even deeper into college football."

Nissan is already highly visible on campus, having locked down sponsorships with 100 colleges after launching its successful "Nissan Heisman House" campaign with ESPN. The automaker is also an official sponsor of the College Football Playoff and National Championship Game, and has used the title tilt to break new creative.

Nissan's revised football strategy will not have an impact on ESPN's NFL sales, as the automaker has a long-term deal in place with the network. Fox said Nissan's pro and college spend is on par with a year ago, while NBC and CBS declined to comment on the matter. An executive with knowledge of Nissan's dealings with NBC said it had not bought any in-game inventory during the upfront, but that talks between the two sides continued well into the summer.

Nissan did not explicitly confirm or deny that it has switched gears on its NFL game plan, although it did suggest that college football was paramount. "Our strategy is about leveraging big cultural moments and integrating our brand into where consumers are driving popular conversation," said Jeremy Tucker, VP-Nissan North America marketing communications and media, in a statement furnished to Ad Age. "As all things evolve, Nissan is focused now on taking our College 100 program to the next level, fully leveraging our 10-year partnership with the Heisman Trophy Trust and the upcoming Heisman House campaign, and amplifying another really big moment to be revealed soon. Stay tuned."