Execs Eye Better Second Half, Hope to Put 15% Plunge Behind Them
READ THIS NEXT
Facebook offers millions of dollars in refunds to advertisers tripped by measurement mistake

NEW YORK (AdAge.com) -- Nobody ever mistook the first half of this year for a good time, but a Nielsen report last week shed sobering light on just how bad it's been.

U.S. ad spending dropped 15.4% from the first half of 2008, Nielsen said, for the biggest plunge since it company started calculating these figures in 2002. Cable TV rose 1.5%, Spanish language cable eked out a 0.6% gain, and the other 17 measured media sank -- from display advertising on the web, down 1%, to local Sunday supplements in newspapers, down a whopping 45.7%. All that combined to blow a $10.3 billion hole in ad spending.

Of course, the Nielsen report didn't even track the damage to marketing activities beyond 30-second TV spots and ad pages. And it didn't capture the recession's less-quantifiable burdens. Media sellers found themselves asked to do work, for example, that marketers or agencies had once done themselves -- until they laid off the employees who'd done it.

But the numbers at least provided a new way to sum up, and an opportunity to bid farewell to, six months of notably bad times. The only good news is: The second half is looking, thank heaven, like an improvement.

Grim start
The first few months of 2009, when many were terrified of economic freefall, played especially brutally. "The most shocking thing about the first quarter was how advertising that was booked started just cancelling," said Carlos Lamadrid, senior VP-chief brand officer at the Woman's Day Brand Group. "The phones rang off the hooks, and not in a good way. In a period of just a few weeks, schedules just disappeared. Budgets just went away."

"I personally got lots of calls from clients apologizing and feeling awful because their budgets were slashed," he added. "What could I say but 'Gosh, sorry.' Clients were distraught and worried."

"With creative marketing and integrated deals we have found lots of new business," Mr. Lamadrid added. "Woman's Day magazine is only down 7.8% through October. And single-digit down is the new up."

Another media seller remembered his growing alarm as he looked down the list of last year's advertisers -- only to see that many had reduced advertising so much that they'd basically gone dark. "The shock was when you'd look at the prior year and realize that almost every company had completely cut their advertising this year," he said. "It'd be: 'Dark. Dark. Bankrupt. Dark. Search advertising only. Dark.' Etc."

As media sellers entered the recession, they received fewer requests for proposals from advertisers. As it proceeded, they saw diminishing returns from the RFPs they did get to answer.

"Historically people would come back and say, 'You've got the business' or 'You don't have the business' within a couple of weeks," said Paul Rossi, North American publisher at The Economist. "The RFPs that are in limbo are much higher now."

'More negotiation'
When responses did come, they frequently reduced the scope of work initially envisioned. Maybe a project originally proposed a price tag of about $1 million. "Then they'll come back and say, 'Actually it's $750,000.' Then it's $500,000," Mr. Rossi said. "There's a lot more to-and-fro-ing and a lot more negotiation."

Putting the first half behind him, however, Mr. Rossi sounded encouraged. "Our RFP volume is actually pretty good at the moment," he said. "So that bodes quite well for the fourth quarter."

This dip everyone's trying to pull out of, however, is the only one of the three big media downturns in the past 25 years that has truly affected all kinds of media, said Jeff Haley, CEO of the Radio Advertising Bureau and a former global marketing executive at Time Warner.

"The only thing I can find remotely positive to say is we are all suffering together," Mr. Haley said. "This is not a repudiation of the value of measured media, not a secular issue related to emerging technology. It's a significant economic reality we're all living in, and accommodating in each of our own ways."

The recession disrupted marketing activities beyond traditional advertising, of course. The damage in areas such as public relations, word-of-mouth, direct mail and events may not have been as steep, but first half was difficult for those sectors, too.

Off a cliff
Wrap in everything, and media and marketing spending this year will probably arrive 10.6% below 2008, according to Tom Love, exec VP-strategic resources and insights at ZenithOptimedia. That would be the steepest decline in annual ad spending since 1980.

Revenue for the public relations agencies belonging to Interpublic Group declined 5% in the first half, according to Harris Diamond, head of the Constituency Management Group, which oversees Interpublic agencies in events, public relations, branding and sports marketing. "On the PR side we're not seeing clients shutting down like previous recessions," he said. "The contrast is rather significant. Our largest agencies are holding up the best and the others are doing okay."

"The events business clearly saw a cutback there on revenue, billings and events," Mr. Diamond said. "Trade shows canceled, product launches and business meetings canceled. For us that's a couple-hundred-million-dollar business, and we're clearly seeing the impact there. But now we are starting to see the phone ring again in that sector."

And now, unlike at the start of the year, the phone is ringing in a good way. 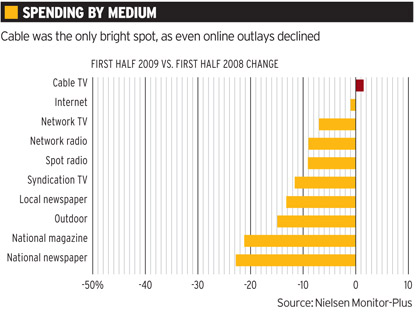