E-cigarette brand NJoy is departing from its competition with a new campaign that carries the tagline, "Friends Don't Let Friends Smoke." The campaign, which includes a TV commercial, offers NJoy King e-cigs as an alternative to traditional smokes. 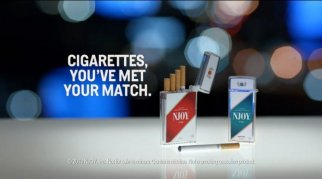 Many of NJoy's competitors have borrowed from Big Tobacco's playbook of glamorizing the practice of vaping or tapping celebrity spokespeople, with Lorillard's Blu e-cigs, the leading brand in the category with roughly 40% of the market, tapping actor Stephen Dorf and TV personality Jenny McCarthy to promote their products.

But the NJoy TV spot depicts friends helping friends: by carrying a couch up a flight of stairs, running interference during a bar fight, delivering a best man speech at a wedding -- and replacing a traditional cigarette with the electronic version.

"For everything friends do for each other," a voiceover says. "This new year return the favor. Friends don't let friends smoke. Give them the only electronic cigarette worth switching to: the NJoy King." It concludes with the tagline: "Cigarettes, you've met your match."

While e-cig marketers have wide latitude to advertise on TV, they cannot make health claims about their products. The NJoy spot toes that line very closely by offering e-cigs as an alternative to regular cigarettes without specifically saying why friends don't let friends smoke.

Asked whether the ad winks at the audience about health claims, a spokeswoman for NJoy said yes.

"We do not advertise e-cigs as a smoking cessation device," a company spokesman said in a subsequent statement. "However, a unique aspect of the NJOY video is that we are appealing to the friends & loved ones of smokers -- asking them to leverage the fundamental connection and emotional bond of love that bring us all together and strengthens our trust/intimacy. Everyone can identify with the desire to help our friends & loved ones become the best versions of themselves, and goal (especially in the new year!) to strive to be better versions of ourselves."

In December 2012, NJoy introduced a television spot in which a man pulls on an e-cig before exhaling a thick cloud of vapor. The Foreigner song "Feels Like the First Time" accompanies the ad, which aired in some local markets during last year's Super Bowl. That spot, NJoy's first, drew attention from some anti-smoking groups. which complained that NJoy was glamorizing the act of smoking.

The new campaign, from Arcade Creative Group, will appear through the winter and spring on cable networks including Discovery, ESPN and Viacom, the company said, as well as on the radio, in digital media and in out-of-home ads. NJoy plans to spend more than $30 million on marketing in the U.S. this year and more than $50 million in international markets, according to the company.

E-cig makers have looked to the winter and spring has a key time to advertise because of the perception that smokers aim to quit the habit as a New Year's resolution (and won't want to go outside to smoke in the colder weather). The Food and Drug Administration, however, has not approved e-cigarettes as viable smoking cessation products. And most e-cig companies have backed off from directly portraying their products as such devices.

The e-cigarette market, which is expected to reach $1.7 billion in sales this year, is currently unregulated, allowing for newcomers like NJoy to air TV spots despite a more than 40-year ban on tobacco commercials. Two of the Big Three tobacco companies -- Reynolds American and Lorillard -- have also returned to the airwaves with ads for their respective e-cig products.

But the FDA is expected to weigh in on possible e-cig marketing restrictions as early as this month. Regulations could include a ban on TV advertising. Analysts who once predicted a TV ban -- which one called a "no brainer" last fall -- have lately seemed less certain, citing potential litigation from e-cig marketers.

~ ~ ~
CORRECTION: An earlier version of this story said Altria was running TV ads for its e-cigarette product. Altria, the nation's largest tobacco company, is running print ads in Arizona and Indiana for its e-cigarette. It is not airing TV commercials.