Media 'Sells, and Sows, Violence Against Its Own People'
READ THIS NEXT
Snapchat strikes deal to sell local ads through newspaper giant Gannett

The National Rifle Association broke its long silence since last week's shooting massacre at Sandy Hook Elementary School by blaming the deaths on lax enforcement of existing gun laws, unguarded schools and a media business that "sells, and sows, violence against its own people." 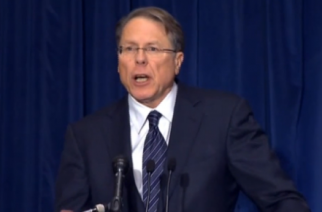 The media "try their best to conceal" the extent of "vicious" video games such as "Bulletstorm," "Grand Theft Auto," "Mortal Kombat," "Splatterhouse" and "Kindergarten Killers," NRA CEO Wayne LaPierre said at a press conference, according to a script provided by the association.

Mr. LaPierre played a video clip of "Kindergarten Killers," a free online game in which a janitor goes on a shooting spree in an elementary school -- one in which the students are armed.

"Then there's the blood-soaked slasher films like 'American Psycho' and 'Natural Born Killers' that are aired like propaganda loops on 'Splatterdays' and every day, and a thousand music videos that portray life as a joke and murder as a way of life," Mr. LaPierre said.

"Rather than face their own moral failings, the media demonize lawful gun owners," he added, "amplify their cries for more laws and fill the national debate with misinformation and dishonest thinking that only delay meaningful action and all but guarantee that the next atrocity is only a news cycle away."

Nor do reporters understand guns, repeatedly inaccurately describing semiautomatics as "machine guns," he said. "They don't know what they're talking about."

In addition to making its first comments on the Newtown shootings, the NRA has re-established its Facebook page, which disappeared last Friday.

A protester interrupted Friday's press conference at one point, shouting that the NRA has "blood on its hands."

Mr. LaPierre called for armed security at every school, saying that the NRA could assist the effort. "Every school in America needs to immediately identify, dedicate and deploy the resources necessary to put these security forces in place right now," he said, according to the script. "And the National Rifle Association, as America's preeminent trainer of law enforcement and security personnel for the past 50 years, is ready, willing and uniquely qualified to help."

The NRA has recruited former Representative Asa Hutchinson to lead that push, which it labeled the National School Shield, Mr. LaPierre said.

"There'll be time for talk and debate later," he said. "This is the time, this is the day for decisive action."

Critics took to social media to dispute his arguments. "I now see what the Mayans predicted about today has come true," wrote "Bowling for Columbine" director Michael Moore wrote on Twitter. "Except that the only world that 's going to end is the NRA's."