Thirty-Second Spots Are Running Between $1.3 Million and $1.5 Million
READ THIS NEXT
Netflix protesters, Chappelle supporters clash as employees walk out

NEW YORK (AdAge.com) -- The price for a 30-second ad in ABC's vaunted telecast of the Academy Awards is running between $1.3 million and $1.5 million, according to media buyers, a range that tracks even with last year's prices even as a newly expanded pool of best-picture nominees might bring broader audiences. 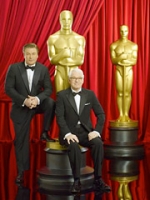 Steve Martin and Alec Baldwin will co-host the 82nd Academy Awards on ABC.

Last year's Oscar telecast cost advertisers around $1.4 million for a 30-second ad, down significantly from 2008, when a 30-second spot commanded as much as $1.82 million.

An ABC spokeswoman said executives could not be reached for immediate comment.

Ad buyers say ABC still has commercial time available during the upcoming Oscars, but has become more bullish on its sales over the last few weeks in tandem with an improving outlook on the economy. The 82nd annual Academy Awards air Sunday, March 7, on the Walt Disney-owned network, which has broadcast the Oscars since 1976.

Changes to the telecast
The Academy of Motion Picture Arts and Sciences, the organizer of the awards, last year allowed movie studios to run movie ads for the first time. This year the event has another twist: Ten nominees will be allowed to compete for best picture -- the first time in six decades that a field wider than five nominees has been allowed.

Increasing the slate of top films nominated could have a beneficial effect on the telecast. Ratings for the Oscars often hinge on the types of movies up for consideration for top awards. More often than not, when the top movies nominated are artsier films aimed at older audiences, viewership tumbles, and when the nominees for best films are blockbusters tailored for the masses, the ratings go up.

In 1997, for example, approximately 55 million viewers tuned in to see the crowd-pleasing "Titanic" win best picture. But in 2003, when "Chicago" won the honor, only 33 million watched. And just 32 million tuned in to see "No Country for Old Men" snare the prize in 2008.

Oscar ratings hit a new low that year, down from about 38.9 million in 2007, according to Nielsen research compiled by Brad Adgate, senior VP-research at independent ad-buyer Horizon Media. Oscar ratings rebounded in 2009, when the event snared approximately 36.3 million viewers.

Audience still huge
As audiences continue to fragment around all kinds of new viewing opportunities on mobile devices and digital venues, advertisers still count on events such as the Oscars to deliver big viewer numbers. The Oscars are typically the biggest ratings event on TV aside from the Super Bowl and the National Football League's NFC and AFC Championship games.

Movie buffs and advertisers should get a sense of how the 2010 broadcast of the event will do when the Academy announces nominees the morning of Feb. 2.