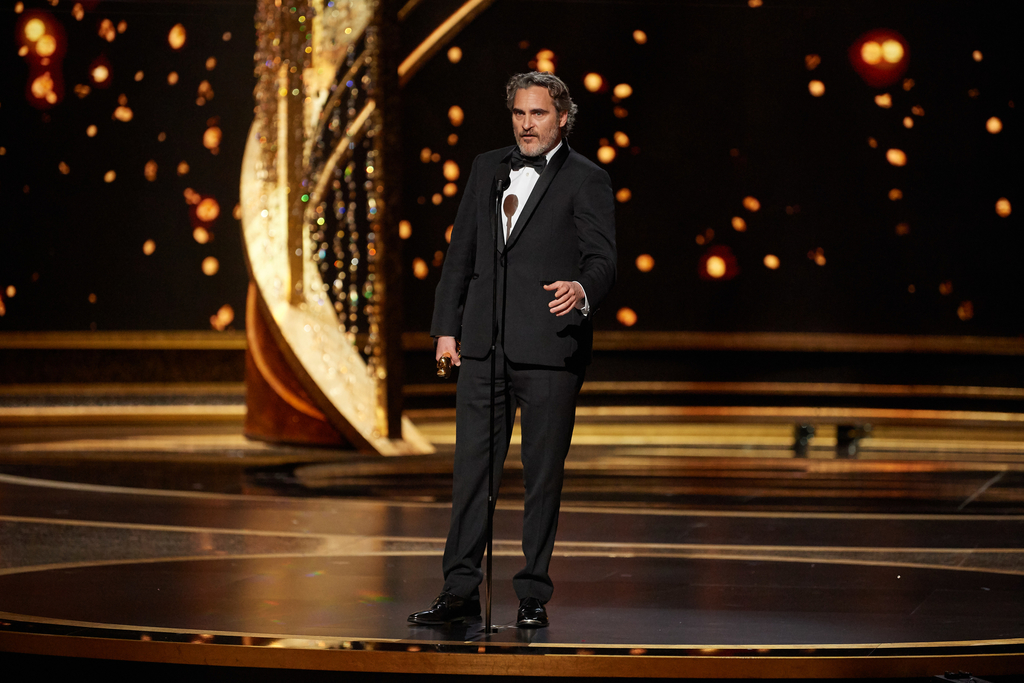 Joaquin Phoenix's 'Joker' was the only blockbuster that made it to the winner’s circle.

A dearth of eligible blockbusters and a significant decline in the number of homes with access to over-the-air signals conspired to put the squeeze on TV’s most formidable awards show, as ratings for ABC’s broadcast of the 92nd Academy Awards slumped to an all-time low Sunday night.

According to Nielsen live-plus-same-day data, the latest installment of the Oscars averaged 23.6 million viewers, making it the least-watched Academy Awards ceremony in TV history. The previous low-water-mark was set two years ago, when ABC’s Oscarscast averaged 26.5 million viewers.

Last night’s turnout marked a 20 percent decline compared to the 2019 broadcast, which averaged 29.6 million viewers. As one might expect, ABC’s numbers were down across all conceivable metrics; with an average draw of a 5.3 rating (approximately 6.9 million adults 18-49), the network’s demo deliveries plummeted 30 percent versus the year-ago 7.7 rating (9.9 million).

In just four years, the Oscars broadcast has seen nearly half of its advertiser-coveted viewers vanish like Keyser Söze, a rate which is even more accelerated than the losses the networks have sustained in the same time frame by way of their general-entertainment programming. Since 2016, the Big Four nets have seen 32 percent of their commercial impressions for scripted and other non-sports programming disappear.

While 23.6 million viewers still qualifies as a massive audience in an era of accelerated media fragmentation, the Academy Awards ceremony is no longer the top demo dog among the annual gowns-and-trophies galas. For only the second time since Nielsen has been keeping track of this sort of thing, this year’s Grammy Awards broadcast topped the Oscars in the 18-49 demo. (CBS in January edged ABC by a tenth of a point, but scored a much more convincing victory in 2012, when the Whitney Houston-haunted show averaged a 14.1 demo rating to the Oscars’ 13.0.)

If the atomization of the linear TV audience likely didn’t do ABC any favors last night—of the total national pool of 120.6 million TV households, only 83 percent, or 100.1 million homes, now subscribe to a bundle or use an antenna in order to access the broadcast networks (just two years ago, network penetration was at 91 percent)—enthusiasm for this year’s Oscars may have been muffled by the pool of nominees. As much as Bong Joon-ho’s “Parasite” deserved its Best Picture statuette, a foreign-language film that put $35.5 million worth of fannies in U.S. theater seats isn’t exactly the sort of crowd-pleaser that helps boost TV ratings.

Wedged between “Booksmart” and “Stuber,” “Parasite” was only the 98th biggest box office draw of 2019.

The same dynamic held sway among the acting categories, as Joaquin Phoenix represented the only blockbuster that made it to the winner’s circle. Phoenix’s titular role in the $335.1 million-grossing “Joker” earned him the Best Actor hardware in a field that included two Netflix thesps (Adam Driver in “Marriage Story” and Anthony Hopkins in “The Two Popes”) as well as Antonio Banderas in the Spanish-language film “Pain and Glory.”

Also in the running for Best Actor (“Once Upon a Time in Hollywood”) was Leonardo DiCaprio, who featured rather prominently in Oscars’ biggest night. At the time the 70th Academy Awards aired, James Cameron’s “Titanic” had already earned $338.7 million in domestic box office, making it the biggest money-maker in Oscars history. Not surprisingly, the movie’s popularity translated to staggering TV deliveries; the 55.3 million viewers who tuned in to ABC on March 23, 1998, set a record that has yet to be broken.

Among the biggest spenders in last night’s broadcast, according to iSpot.tv data, were Cadillac, Verizon, Rolex, Hulu, M&Ms, Quibi, Adobe, Google, McDonald’s and Samsung Mobile. Estimates from SQAD MediaCosts: National put the cost of the most expensive Oscars inventory at around $2.3 million per 30-second spot, while the average rate was more or less flat at $1.9 million a throw.

As is the case with the Super Bowl, Academy Awards buys are not backed by ratings guarantees, which means that ABC isn’t on the hook for any audience deficiency units/make-goods.