Legendary journalist James Brady—who later went on to become an Ad Age columnist (he died in 2009)—created Page Six at the behest of the paper's owner Rupert Murdoch, who'd bought the New York tabloid for $30.5 million in 1976. It wasn't long before Page Six became a major force in New York media—an inky forum where reputations could be ruined or burnished, the famous humbled, fledgling celebrities given a boost and hot spots annointed or suddenly iced out. Other print gossip franchises tried to match Page Six's momentum (from New York Magazine's Intelligencer section to The New York Times' "Public Lives" column), but it wasn't until the internet's mid-childhood that it faced serious competition (Gawker, TMZ).

Now Page Six is making a fresh bid for relevance—and crossplatform dominance. Here's what you need to know:

Page Six TV launches next month
It seems like the possibility of a TV version of the gossip page has been been floated forever, but now it's actually happening. Endemol Shine North America and the Post are launching Page Six TV on Sept. 18. Twentieth Television is handling distribution and has placed the show into more than 200 local markets covering 98% of the country. It'll be hosted by John Fugelsang (Sirius XM Radio/VH1) and will feature a panel of "Page Six TV Insiders" including Page Six Editor Emily Smith, reporter Carlos Greer, Bevy Smith (Bravo's "Fashion Queens") and Variety's Elizabeth Wagmeister.

Page Six—the print version—gets a refresh starting today
"It had been decades since Page Six in print had been significantly changed, and it was due for a renovation," New York Post CEO-Publisher Jesse Angelo tells Ad Age. The logo you're familiar with remains the same, but as for the rest of the page, "We wanted to make it easier for the eye to follow, to give some new visual cues to famous features like 'Blind Items.' ... Perhaps the most immediate thing people will notice is that instead of a cartoon every day, Page Six will have more photos." 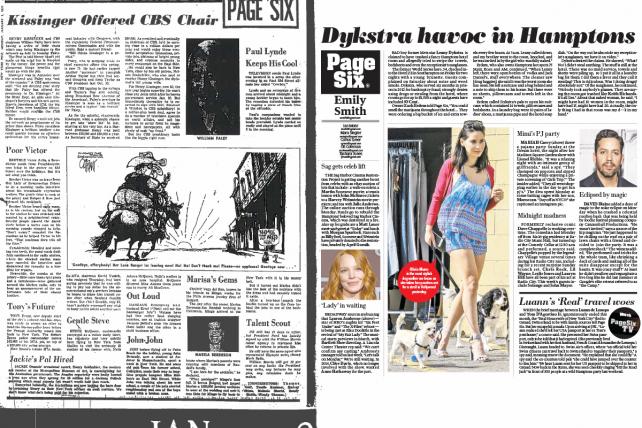 Page Six long ago strayed from its original place (you're more likely to find it on, say, page 8 or 12). And it also continues to run longer than just one page, all the better to offer adjacencies to advertisers—including Bloomingdale's, Lord & Taylor, Saks Fifth Avenue, Bergdorf Goodman, Steve Madden, Ralph Lauren and Corcoran—who know that pretty much anyone who picks up a Post is going to turn to Page Six.

Page Six is now also a standalone mobile app
Earlier this month the New York Post quietly introduced a new standalone Page Six app for iOS and Android (separate from the existing New York Post app) as a bid to expand the brand's digital reach beyond nypost.com/pagesix.com and appeal to readers who may have never actually seen a physical copy of the Post. (Two big stories on the app this morning: "Kevin Hart urges celebs to donate to Hurricane Harvey relief" and "J-Rod is this summer's hottest celebrity couple.")

"Our largest print footprint is the five [New York] boroughs and the suburbs, but we still have a very sizable readership in Florida, Washington, Boston, Los Angeles and the areas surrounding," says Angelo, who also serves as chief of digital advertising solutions at Post parent News Corp. "Digitally, both pagesix.com and nypost.com are national brands—over 80% of our traffic comes from outside the New York DMA," he adds.

One very noticeable new thing on pagesix.com and in the app: the Page Six TV section—now basically a teaser, but set to become a full-fledged mobile companion for the TV show (on which Angelo also serves as an executive producer) starting Sept. 18.

And in anothor bit of Murdochian synergy, the Fox Television Stations group is giving a big boost to "Page Six TV," launching it into 16 key markets, including New York, Chicago and Los Angeles.