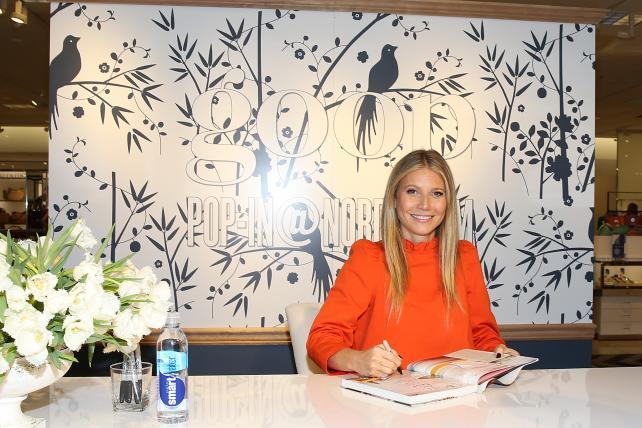 Gwyneth Paltrow attends a book signing at a '[email protected]' at The Grove on June 8 in Los Angeles.
Credit: Phillip Faraone/Getty Images for goop

On an overcast Saturday in Los Angeles, more than 600 people, mostly well-dressed white women, crowded into a spacious hanger in Culver City for a lesson in how to be Gwyneth Paltrow.

The daughter of actress Blythe Danner and a director Bruce Paltrow, Gwyneth has won an Academy Award and an Emmy, dated Brad Pitt, married and "consciously uncoupled" from a rock star, raised two children and started a trend in unusual baby names. That was all by the age of 40.

For her next act, Paltrow has attacked a professional challenge that flummoxes even the savviest mogul: building a sustainable, profitable, online media business. Paltrow is the founder and public face of Goop, a female lifestyle company that began as a newsletter and has since expanded into a diversified media concern. Goop publishes recipes and articles, sells fragrance and skin creams, and -- as of last weekend-- hosts a conference.

"Today comes out of my deep curiosity," Paltrow said in her introductory remarks to a rapt crowd at the first ever Goop Health Summit. She grew interested in health after her father was diagnosed with throat cancer, at which point she was still "a chain-smoking, Camel Light girl." Paltrow still enjoys the occasional cigarette at parties, but, following a macrobiotic phase and experiments with cupping, she's eager to share her realization that women "do have autonomy over our health."

Media companies of all shapes and sizes have dabbled in the conference business. Armed with the right location, the right pitch and the right perks, conferences can be incredibly lucrative. Hundreds of wealthy executives will pay thousands of dollars for a trip to a luxury hotel on the beach to partake in morning yoga, free food from celebrity chefs, and talks from peers about their successes and failures.

Goop's first "wellness summit" is, in Paltrow's words, "focused towards being and achieving an optimal version of ourselves." About 600 people paid $500, $1000, or $1,500 (each level denoted with a crystal) to attend a single day of New Age self-improvement, replete with panels, food, a high-end shopping boutique, and such activities as therapy with crystals.

Beauty and business
With its advocacy for vaginal eggs and $956 toilet paper, Goop is an easy company to ridicule, and its wellness summit duly resembled a "Saturday Night Live" parody of a fancy conference.

Visitors entered a 30,000-square-foot event facility with all-white décor, including a hemispheric dome in which visitors could get their aura photographed. A staff of fit men and women dressed in a uniform of white t-shirts and black pants attended to guests' every need, dispensing probiotic smoothies between sessions on "The Three-Way" (sex and relationships) and "The Tools" (to a more fulfilled life).

Panelists were a Who's Who of Goop VIPs, including Dr. Habib Sedeghi, the architect of Paltrow's conscious uncoupling and, according to the actress, the "gentleman who has had the biggest impact on [her] physical and psychological standpoint."

The women in attendance, outfitted in yoga pants, summer-y dresses and the occasionally kale t-shirt, perused $185 bottles of active botanical serum (it's for your skin) and $90 vitamin packs amid sips of matcha and bulletproof coffee. Topics ranged from the political (lack of female representation in media) to the absurd (fecal transplants and grounding slippers).

"We're trying to open up a conversation to normalize a place where we can talk about sexuality," said Jenni Konner, co-creator of the TV show Girls and co-founder of the LennyLetter newsletter.

In the food stalls, an outpost for poke, the uber-trendy seafood snack, abutted a butcher serving bone broth (just as trendy, but without the seaweed). Dessert consisted of gluten-free pastry and vegan ice cream. (I had the kale cookies & cream.)

During a panel about gut health, doctors advised the crowed on the pernicious effects of lectins and nightshades, and Dr. Steven Gundry told the audience he skips breakfast and dinner. His latest book, "The Plant Paradox," is a New York Times bestseller.

Lest attendees neglect their outer beauty, Goop welcomed them to pamper their face with Face Love's face and neck massages, or get a blow-out with a $1000 hair dryer. Others opted for the oxygen bar or an IV Drip, at which fluid treatments that typically cost a minimum of $195 were free of charge.

The takeaways
Notwithstanding how many on the internet are eager to besmirch Paltrow, Goop's bourgeois message of self-improvement inspires avid loyalty that is the bedrock of most successful media businesses. Goop knows its clientele and what it wants.

One popular attraction was Dr. Julius Few, a plastic surgeon who practices an invasive version of a face lift called threading. At the cocktail party that concluded the evening, a mom and daughter who had flown in from Alabama just for the conference approached Few to express their appreciation. Another woman approached him to ask: "Do I need it?"

No one needs it, Few said, but that doesn't mean you don't want it. "There are some small things I could do," Few said, much to her delight.

Mark Agnew, one of the only men in attendance, ventured to Los Angeles from Dallas, where he is a compliance office at Goldman Sachs Group. He loves Goop's recommendations for travel, food, and lifestyle. While Dallas only just got its first poke stand, here Agnew could sample all the trappings of the rich and fabulous.

"We really wanted it to be this extreme expression of the brand," Elise Loehnen, editorial director, told me in an interview. "Goop is the first modern lifestyle brand built from a digital platform, and we are addressing this idea of the full woman: all the things we're interested in collectively, as an editorial team and our readers who write to us.''

Those readers are, by and large, women of a certain age and class -- the ideal demographic for the vendors on display. Seth Cohen, co-founder of Sweetfin Poke, jumped at the chance to associate his growing chain with Paltrow and to market to Goop readers. Cohen wouldn't comment on the particulars of his financial arrangement, saying only that he had provided poke bowls to everyone "not for profit."

Paltrow's power
Paltrow declined to be interviewed for this story; those that did interview her received a scant minute or two. Yet all the attendees and panelists glowed about her generosity and bravery.

In the face of frequent criticism, Paltrow is unabashed about her curiosity and ambition. She is also self-deprecating. After peppering Nicole Ritchie with questions about leech facials on a panel, Paltrow quipped, "I thought I was batshit crazy." Richie and Paltrow spoke alongside pals Miranda Kerr, Tory Burch, and Cameron Diaz -- all successful, ambitious, and beautiful.

"This is just who she is," said Diaz. "If there was no Goop, people would be calling her for the same information.'' Or, in the words of a woman clutching a matcha drink outside the main hall, "doesn't everyone want to be like Gwyneth?''

Not everyone, but enough people. At the end of the day, Paltrow announced that Goop would host a second summit in New York later this year and would return to Los Angeles next year. "I learned so much,'' Paltrow said. "I hope you all learned something valuable."

Women then sauntered to a cocktail party that offered collagen-laced martinis and rosé before claiming gift bags filled with at least $200 in products.