Online paywalls are helping some newspaper and magazine websites increase the ad rates they charge, according to a new report from the Online Publishers Association. 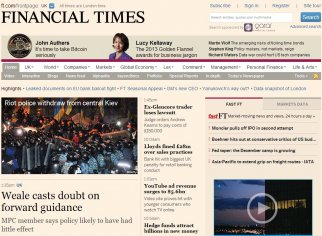 It's a hopeful sign for publishers that have hesitated to erect paywalls, despite the potential to generate new revenue from readers, for fear of hurting traffic and ad revenue in turn.

"This report demystified the concept that subscription models would have a negative impact on the ad growth," said Pam Horan, president of the OPA, whose report examined nine of its members that use some form of paywall, including Time Inc., The New York Times and The Financial Times. "We saw consistently that our members were having a very successful advertising business while growing their subscription business."

Paywalls help increase ad rates partly because publishers capture valuable "first-party" data on subscribers as they sign up, the report suggested. "They're finding that these models give them additional insights into their readers," Ms. Horan said. "They're using data as an asset to understand consumer behavior and help marketers target these audiences and design the right products."

One media buyer cast some doubt on the study, saying clients aren't quite as excited about buying ads on paywall sites as the study might indicate. Sites with subscription models tend to charge higher ad rates, according to the media buyer, but the prices ultimately boil down to factors such as supply and demand, marketplace conditions and the ads' performance.

In the report, Rob Grimshaw, managing director at the Financial Times' website, said the paper has grown its ad business every year since introducing a subscription model.

"Because of the deep relationship we have with the audience and the data we have on our subscribers we can guarantee that advertisers reach very specific scarce audiences," he said.

Newspapers have long looked to online subscriptions to shore up declines in print subscriptions and advertising revenue. But the history of these paywalls includes abandoned attempts, some of them recent, as well as significant recalibrations. The San Francisco Chronicle, for example, gave up on charging for online content this year after less than six months.

The Dallas Morning News scrapped its paywall in October and opted instead for two versions of its site -- one that is free and ad-supported and another "premium" version with fewer ads.

Other papers have found success with metered models that allow readers a set amount of free articles each month before requiring a subscription. The New York Times, which follows that strategy, now collects more revenue from subscriptions than advertising.

Yet many publishers still resist the model, particularly in magazines. Time Inc.'s People and Sports Illustrated magazines keep some content behind a subscriber-only paywall, but siblings such as InStyle operate totally free sites.