As any good marketer knows, your brand is in the hands of the public. That's true more than ever, of course, in these days of social media, crowdsourcing and transparency. The American consumer is the boss. He helps determine the course of your brand; she is the raconteur relaying your brand story.

And, to contradict David Ogilvy, she's often a stone-cold moron. 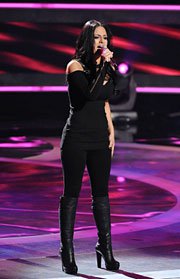 That's what millions of Joe Consumers came to realize after last night's "American Idol," when Pia Toscano, the raven-haired and golden-throated songbird, was sent packing at the behest of "America," to wailing and teeth-gnashing by the show's judges and studio audience. The sendoff was so abrupt and, as Ryan Seacrest always makes a point to warn us, "shocking," that the show's producers broke a rule and allowed her to sing one last time before skulking into the shadows of anonymity. (Anonymity being relative; there is a fine tradition of grievous early dismissal on "Idol" that precedes plenty more spotlight for the booted, including Season 5's Chris Daughtry and Season 3's Jennifer Hudson.)

None of this should be news to us. As anyone who has ever surrendered control of a Super Bowl ad to the public knows, you get what you pay for. But after I had to endure a wrinkled and bare-chested Iggy Pop writhing around the stage warbling "Wild Child," (notes for Mr. Pop: You are no child, and please see Steven Tyler for a plastic surgeon recommendation) and Constantine Maroulis unleashing "Unchained Melody" (no doubt proving to Simon Cowell, who has said it is his favorite song, that he was right to flee for "X Factor"), the ejection was so unjust that I had to be restrained from slamming down my remote and shouting, "You're out of order!"

Then I woke up today and realized Pia was gone and I don't really care.

Sure, I was fulminating with rage over the unfairness, but Pia, for all her attempts to win me over, never did. Nor have really any of the contestants this year. Yes, I was caught up in the drama of Casey Abrams nearly being nudged off the plank two weeks ago and was swept up in the emotion of his save. But with the possible exception of country crooner Scotty McCreery ("Baby, lock them doors and turn the lights down low") and Tourettes sufferer James Durbin (I assure you I am not making this up), no one has really connected with me as a singer, and I suspect I am not alone. I do like them as people, but viewing them as performers, I am diffident. 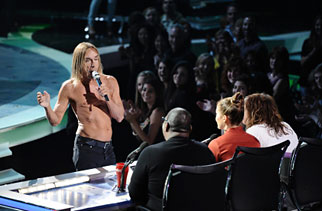 So much for engagement. What's that you say? We must be engaged because Pia is a trending topic? Well, so is Rebecca Black. After all, it is Friday.

The big idea for the producers this year was to shake up the brand by getting away from the supposed "curse of the cute guys," the more or less interchangeable male winners such as Kris Allen and Lee DeWyze who keep getting voted in by teens and older women. (I refuse to lump into that category David Cook, who I consider one of the most versatile and talented winners; lately his send-off song is the best thing about the show.)

But look at what's happening: the voters, the people invested in "Idol," are still the same voting bloc. And excepting Jacob Lusk, whose ejection can't be long far off now, they are voting in the young white males again. With Pia's ouster, only two women are left standing.

Of course it's not all the viewers' fault. Each undeserved compliment lavished by the judges on Stefano Langone or Lauren Alaino was a metaphorical nail in Pia's coffin. That said, America still needs to be sent to its room without its supper.