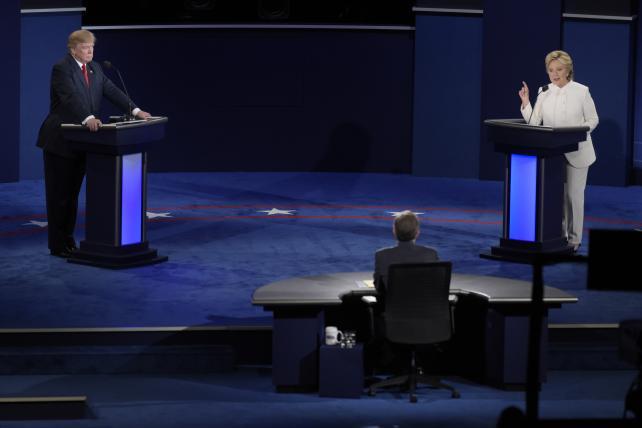 Americans seem oddly taken with "The Donald & Hillary Show," but despite the huge ratings the two antagonists drew during their final prime-time joust, there will be no second season.

All told, the three 2016 POTUS debates averaged just north of 74 million viewers, making this debate cycle the most-watched of any election year. By comparison, the Romney-Obama trilogy averaged a hair over 64 million viewers.

Nearly half (49.5%) of those who tuned in for last night's program were viewers age 55 years and older. Millennials accounted for just 14% of the audience.

According to TiVo analysis, the moment in the debate that triggered the greatest amount of time-shifting arrived at 9:56 p.m. EDT, when the University of Nevada, Las Vegas, audience hooted at Mr. Trump's rather disingenuous claim, "Nobody has more respect for women than I do. Nobody." TiVo subscribers repeatedly paused and rewound that particular segment nearly as obsessively as Kevin Costner manipulated the Zapruder film in Oliver Stone's "JFK."

Fox News Channel attracted the largest debate audience with an average draw of 11.4 million viewers, while ABC was the most-watched broadcast net (11 million). NBC took the bronze with 10.4 million viewers, followed by CBS (10.1 million), CNN (8.76 million), Fox broadcast (6.6 million), MSNBC (5.55 million) and PBS (2.7 million). While Fox News won out among total viewers, it tied CNN with a 2.9 rating in the key news demo. That translates to around 3.48 million adults 25-54 for each network.

As was the case with the two previous debates, Wednesday's spectacle competed for share of hearts and minds with a top-tier sporting event. FS1's coverage of Game 4 of the NLCS drew 5.81 million viewers and a 1.8 in the adults 18-49 demo, and while overall deliveries were down 27% compared to last year's Mets-Cubs telecast on TBS, viewership for the Cubs' 10-2 blowout of the Dodgers was up 14% versus the fourth frame of the 2014 Giants-Cardinals series on FS1.

Despite having to bear up against the debate, the Cubs-Dodgers game now stands as the second most-watched telecast since FS1 went live back in 2013. The net's biggest draw to date: Game 2 of this year's NLCS, which averaged 7.29 million viewers and a 2.1 in the 18-49 demo.