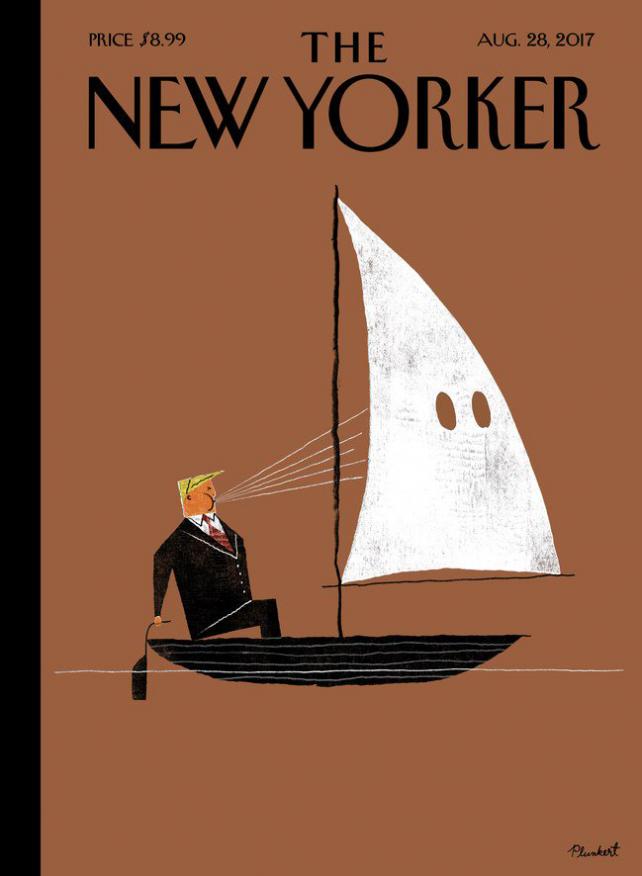 Who said print is dead? In the latest salvo against President Trump's moral bankruptcy, The New Yorker, Time and the Economist—whose covers, along with other publications', have become the pop-art conscience of the anti-Trump resistance—have produced three more powerful images.

This time around, they took on Trump's affinity for white supremacists, on full display this week when he said those that marched against the neo-Nazis in Charlottesville last Saturday were equally at fault for the resulting violence and death.

The New Yorker's cover, "Blowhard," was drawn by artist David Plunkett, who tells the magazine that "President Trump's weak pushback to hate groups—as if he was trying not to alienate them as voters—compelled me to take up my pen.

"A picture does a better job showing my thoughts than words do," he continues. "It can have a light touch on a subject that's extremely scary."

The Economist, which has been merciless with its Trump coverage, also pushed back fast with a post-Charlottesville take.

"[Trump's] unsteady response contains a terrible message for Americans," the piece notes. "Far from being the saviour of the Republic, their president is politically inept, morally barren and temperamentally unfit for office."

"Having long petted and pampered the demons of racial politics, President Trump should have known his response would get maximum attention," reads the article.

The Time cover was created by artist Edel Rodriguez, whose iconic images have been published in publications including Mother Jones, Politico and Der Spiegel, and who Ad Age celebrated in 2016's "Most Creative People of the Year."

This image took off yesterday after posting. It's been shared thousands of times on Twitter, FB, and IG. Thank you pic.twitter.com/abnNhL84Gd

And this one, from 2016, is clear proof that voters knew exactly what they were getting when they put Trump into office.

An unsubtle foil, it seems, calls for unsubtle coverage.