READ THIS NEXT
Streaming TV marketplace gets another 'plus' platform 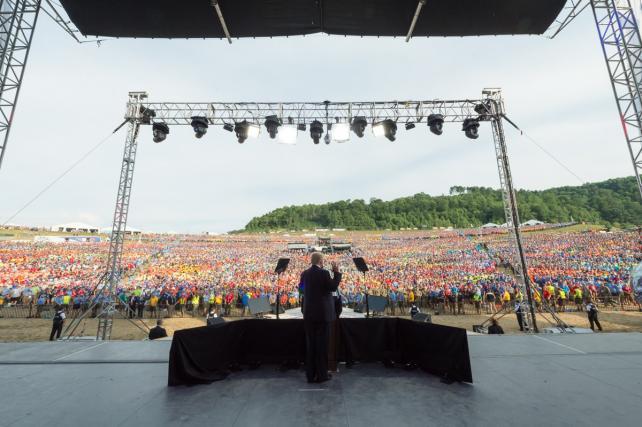 1. Were you, uh, unprepared for Donald Trump's speech at the Boy Scouts of America's National Scout Jamboree in Beaver, West Virginia Monday night? Trying to make sense of all the tweets that have caused "#BoyScoutSpeech" to become a top 10 Twitter trending topic this morning? Here's a helpful guide from New York Magazine's Margaret Hartmann: "The 14 Most Inappropriate Moments From Trump's Speech at the Boy Scout Jamboree," including No. 7:

Trump tells a long, meandering story about the real-estate developer William Levitt and alludes to "interesting" activities he engaged in on his yacht.

Read on for details, brave reader.

2. Hey, was anything happening before the #BoyScoutSpeech? Hmmm, I can't ... quite ... remember. Oh wait, something about Russia and the attorney general and stuff, right? Let's see here. Ah, yes, via The Washington Post: "Trump leaves Sessions twisting in the wind while berating him publicly." (A version of that story appears on the front page of the Post under the more sedate headline "Trump team weighs options for replacing Sessions.") Sari Horwitz, Matt Zapotosky and Robert Costa write,

President Trump and his advisers are privately discussing the possibility of replacing Attorney General Jeff Sessions. ... Replacing Sessions is viewed by some Trump associates as potentially being part of a strategy to fire special counsel Robert S. Mueller III and end his investigation of whether the Trump campaign coordinated with the Kremlin to influence the 2016 election.

4. I'd like to take a moment to point out to American journalists that things could be worse. "The trial of 17 staff members from Turkey's Cumhuriyet newspaper -- one of the country's last remaining opposition publications -- began on Monday in what many are calling a crucial test of press freedom," CNN's Gul Tuysuz and Lauren Said-Moorhouse report. "Charged with terror-related offenses in the wake of last year's failed coup, the defendants -- journalists, executives and lawyers -- made their first appearance in court since they were put in pre-trial detention nearly nine months ago. Each faces lengthy prison sentences of up to 43 years if convicted."

5. BTW, for a second, after reading the following tweet, I thought I somehow missed the news that POTUS had named Sean Hannity to be the new attorney general, replacing Jeff Sessions:

6. Good job, Gizmodo! You made me click! "Trivial Pursuit Predicted Donald Trump Profiting From the Destruction of America."

7. And finally, I leave you with this: