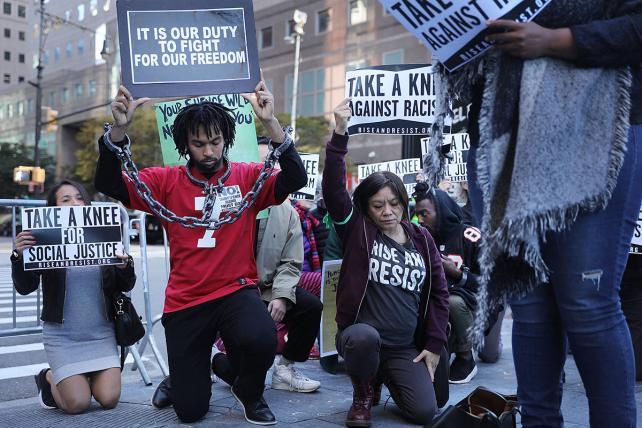 A coalition of advocacy groups 'take a knee' outside a hotel the NFL held a meeting on Tuesday.
Credit: Spencer Platt/Getty Images

NFL owners, executives and members of the league's players union on Tuesday met for nearly four hours to discuss the issues underlying the ongoing anthem protests, but made no move to alter the equation.

"Today owners and players had a productive meeting focused on how we can work together to promote positive social change and address inequality in our communities," the league and the NFLPA union said in a joint statement afterward.

If nothing of substance was accomplished by the meeting, as expected—no decree was likely to come down today from Commissioner Roger Goodell's office, as the NFL generally restricts votes on rule changes and league procedures to the spring owners meetings—the statement at least suggests that the sides would keep the lines of communication open. After noting that the goal is to "utilize our platform to promote equality and effectuate positive change," the owners and players "pledged to meet again to continue this work together."

Under pressure
Anticipation for the meeting had grown amid growing pressure on various parties to kneel, or stand, or make players stand during the national anthem before NFL games. It took place a week after Goodell put out a memo saying "everyone should stand," echoing the earlier announcement by Dallas Cowboys owner Jerry Jones that he would bench players who disrespect the flag.

At the heart of the issue is a seemingly unbridgeable divide between the issues the players hope to address by exercising their right to sit out the anthem and the perceptions of the millions of Americans who watch NFL games every week. After former San Francisco 49ers quarterback Colin Kaepernick last year quietly began sitting out the anthem during pre-season games, he explained that he was doing so to protest inequality and police brutality.

Many people didn't see things in the same light, believing instead that Kaepernick and other players who began adopting his kneel-down stance were showing disrespect for the flag and all it represents. Now an unsigned free agent, Kaepernick and his grassroots movement were all but forgotten until President Trump told Alabamans at a political rally that NFL owners should fire any player who wouldn't stand for the anthem. Trump's fiery rhetoric ("get that son of a bitch off the field right now!") only served to rekindle the seemingly moribund protest effort, and that Sunday saw nearly 200 players taking a knee as the anthem played.

While the president's comments predictably stirred up a hornet's nest, his subsequent claims about the protests' impact on the NFL's popularity have proven wrong. On Sept. 24, the same day of the mass player protest, Trump fired off a tweet in which he asserted that "NFL ratings and attendance are WAY DOWN." This was not the case then, nor is it now.

Still huge
According to Nielsen data, the various NFL telecasts—including the Sunday regional and national games and the prime-time Sunday, Monday and Thursday night packages—are averaging 15.6 million viewers through Week 6, which is down just 5 percent from a year earlier. Household ratings are also down 5 percent to a 9.1 rating, off a half-point versus fom the period a year prior.

Thus far, the regional games have experienced the biggest drop in viewership. Through Week 6, the 1 p.m. games and single-headers are down 11 percent to 13.9 million viewers and an 8.2 household rating. Nonetheless, the only prime-time entertainment series to average a higher audience threshold is CBS's "Big Bang Theory," which over the course of its first three episodes of 2017-18 has averaged just under 15 million live-same-day viewers.

And advertisers have been steadfast in their interest. Through Week 6, in-game commercial inventory in the NFL broadcast windows has generated an estimated $1.24 billion in revenue, up 14 percent from the equivalent period last year. (It's worth noting that, to the networks' delight, a ratings dip coupled with flat or increased demand leads to an increase in the price of buying time in any TV program.)

Attendance is also nowhere near as shaky as Trump would like to believe. Season-to-date, NFL stadiums are averaging a draw of 64,277 fans per week, which marks a slight 3 percent year-to-year decline compared to the 66,496 fans who passed through the turnstiles during each of the first six weeks in 2016.

Coming together
More fuel was dumped on the protest fire earlier this month when Jones, whose Cowboys are often called "America's Team," told reporters that any of his players who disrespected the anthem would be remanded to the bench. As with the president and other football fans who willfully reduce the the protests to acts of treasonous insubordination, Jones' my-way-or-the-highway stance effectively sidelined the social issues that catalyzed the movement.

In a bid to take some of the air out of the controversy, the NFL and NFLPA addressed the perception issue in their joint statement. "As we said last week, everyone who is part of our NFL community has a tremendous respect for our country, our flag, our anthem and our military," the statement read. "In the best American tradition, we are coming together to find common ground and commit to the hard work required for positive change."

While no rule change is forthcoming, the protest movement seems to be quieting down of its own volition. This Sunday, only a dozen players took a knee, sat or remained sequestered in the bowels of the stadium during the anthem.

Prior to the 2009 NFL season, players were not required to emerge from the locker room for the pre-game ceremony.