Publishers including Maxim, Radar Online, Guitar World and USA Today Sports Media are experimenting with a pay wall that instead of charging readers requires them to watch an advertiser's video. 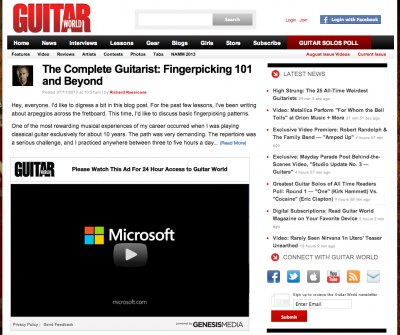 Guitar World asked visitors to watch an advertiser video in exchange for 24 hours of access.

The tactic, which uses a system called Content Unlock from Genesis Media, is meant to help address the disconnect between advertisers' interest in buying web video and consumers' desire to watch enough of it. Most Americans will devote 15 seconds to a given web video before skipping off elsewhere, according to a 2012 Poll Position study. Just 12% will give a video ad 30 seconds. And trying to force consumers to watch ads before a single, brief video can be problematic.

The idea is also to squeeze more revenue from readers without actually asking them to pay. "We act as a soft pay wall, which allows users to pay for content and services in a smart way -- with their attention to targeted brand experiences and videos vs. their credit card," said Mark Yackanich, CEO at Genesis Media, a New York-based started founded in late 2011. "In effect, the brands become sponsors for a readers content consumption, in a very direct and memorable way."

As more online readers look past online display ads -- demonstrating what's called "banner blindness" -- advertisers have sought out video ad units and proven willing to pay more for them. But large ad networks, which can deliver a high number of views, often struggle with being able to target video ads.

Genesis is able to better match online readers with relevant ads, he said, partly because the company works with well-known publishers. "It keeps the content free for the users and provides advertisers a way to smartly target users who are in a particular mindset," Mr. Anselmo said.

It also attempts to glean information about the web surfers it encounters. Genesis assign visitors a value based on a confluence of factors, such as third-party data available on the person, where he or she arrived from and which content the person landed on, Mr. Yackanich said. Publishers can then use that value to decide how the pay wall treats them.

"We'll look at what device they're on and we'll choose, based on what we have available, the right unit to put in front of them -- be it a pay wall subscription, a video advertisement or a survey module or rich media ad," Mr. Yackanich said. "Inherent in this is the targeting. It's making sure that we're matching the right advertiser with the right individual."

The publisher also decides what to give the visitor in exchange for his or her time. If a person watches a 15 second video, for example, he or she might have access to five free articles. "Right now we're working in conjunction with the publishers to make this determination," said Mr. Yackanich, a former NBC executive. "But as we continue to systematize the platform, this sort of value exchange is something that we're investing and defining at the programmatic level based on an individual and their value."

Genesis plans to offer the next iteration of Content Unlock to publishers that have traditional pay walls in place, enabling newspapers, for example, to give some visitors access in exchange for watching a video rather than universally requiring payment.

As with any video unit, of course, viewers can simply tune out or click over to another tab on their web browser while the Content Unlock video, a behavior Mr. Yackanich acknowledged. But that doesn't seem to be happening often, he said. "It requires more action to actually click away from those windows," he added.