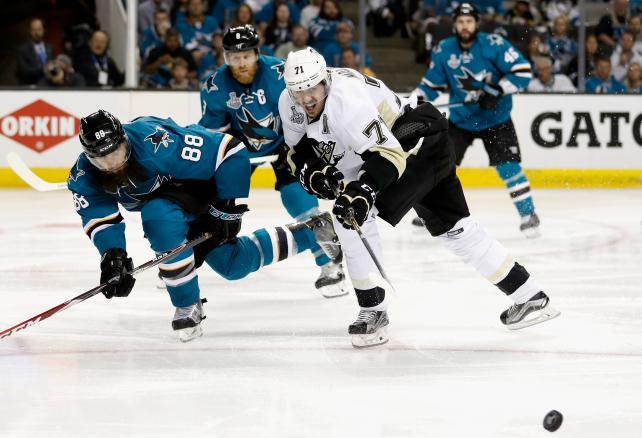 Evgeni Malkin #71 of the Pittsburgh Penguins takes a shot in front of Melker Karlsson #68 of the San Jose Sharks during the third period of Game 6 of the 2016 NHL Stanley Cup Final at SAP Center on June 12, 2016
Credit: Gregory Shamus/NHLI via Getty Images

The 2016 Stanley Cup Final was one of the lowest-rated National Hockey League title tilts since the sport returned to NBC 11 years ago. And while partisans can offer up more excuses for the weak turnout than there are gaps in Brent Burns' smile, the fact remains that hockey simply is no longer a consistent TV draw.

According to Nielsen live-plus-same-day data, the six-game series between the Pittsburgh Penguins and San Jose Sharks averaged just 4 million viewers and a 2.3 household rating, making it the third lowest-rated Final since 2006. Deliveries were down 28% when compared to last year's average (5.53 million viewers, 3.2 household rating), while the demo declined 22% to a 1.4 among adults 18-to-49.

By way of comparison, the blowout-happy National Basketball Association finals on ABC are averaging a whopping 18.1 million viewers, a 10.4 household rating and a 6.5 in the demo through the first five games.

To be sure, this year's NHL final had just about everything going against it, starting with a matchup featuring the decidedly non-traditional market that is San Francisco-Oakland-San Jose (the Bay Area is hardly a hockey bastion) and a Penguins squad that is perhaps one of the most despised franchises east of the Mississippi.

If a Penguins-Sharks pairing seemed doomed from the start, not helping matters was the lack of one of the four domestic Original Six teams. Simply put, ratings tend to soar when teams representing old-school, hockey-mad urban centers like Boston, Detroit, Chicago and New York are suited up for the final. For example, NBC posted its highest numbers in 2013, when the Bruins-Blackhawks grudge match scared up 5.76 million viewers, a 3.3 household rating and a 2.2 in the 18-to-49 demo.

Participating teams aside, the schedule itself did NBC Sports no favors, as the Pens-Sharks series hit the ice on the Monday after Memorial Day weekened, when TV viewing is about as depressed as it gets, outside of Christmas. Then Games 2 and 3 aired on cable net NBCSN, which only reaches about 70% of all U.S. TV homes, whereupon the ratings dropped accordingly. Lastly, Game 6 was scheduled for Sunday night, where it was forced to square off against HBO's biggest hit, "Game of Thrones." Pittsburgh's 3-1 clincher drew 5.41 million viewers and a 1.9 rating among adults 18-to-49, while the warring Westeros clans delivered a princely 7.6 million viewers and a 3.9 in the demo.

While shifting games to cable would appear to be a recipe for diminishing returns, NBC has scheduled a pair of non-broadcast Stanley Cup matches since it re-acquired the NHL media rights more than a decade ago. If nothing else, the heightened exposure helps justify NBCSN's $0.31 per sub per month carriage fee; this year's two cable games averaged around 1.27 million viewers in the core demo, which is an elevenfold improvement over the 119,000 adults 18-to-49 NBCSN averaged during the first quarter.

If hockey may no longer be considered a "Core Four" sport in the U.S. -- the Nielsen data and youth participation stats strongly suggest that soccer has supplanted what has become an increasingly regional phenomenon -- there are still plenty of marketers looking to reach the sport's biggest boosters. According to iSpot.tv estimates, NBC Sports booked approximately $45.8 million in ad sales revenue over the course of the Stanley Cup Final, with a good chunk of those dollars coming from auto, studios, insurance, financial services and quick-service restaurants.