A 14-year-old filmmaker who has already created more content than most people two or even three times her age, Amelia Conway has made short films, music videos and commercials for Toms shoes, the Beats Music app, Target, Nascar and American Girl. The high school sophomore has also held a TEDx Talk on how teens experience ageism and co-hosted a show on internet station "Little Radio" at the ripe age of 7. Is she what Generation Z is going to be like? Maybe so, she told us. Our conversation has been edited.

How did you get into directing?

I was 11 years old and at the time I lived in Texas. A friend and I were really bored and we had this little camera that my parents used and we decided to shoot a film since we had nothing else to do. I got a dress out of my closet that was made by my grandma and had my friend wear it. We went out in the woods behind my backyard and we shot, and it was so much fun. I didn't expect it to be as exhilarating as it was. When we got back to the house, I edited it and my parents put it online.

What was the film about?

It wasn't really about anything. It had music in it and it showed my friend walking through the woods at night, and she had a flashlight that basically was just used as the main light source because it was pitch black. It was just her walking, but I had a lot of fun because it was something I hadn't done before. I was really interested in directing after that.

Is this when you started working with Adolescent, the creative studio that focuses on Gen Z talent and audiences?

Ramaa Mosley [the executive creative director and founder of Adolescent] saw the film online and signed me that summer.

I filmed two commercials with Adolescent all in two days, a Toms shoes one and a Beats Music one. It was so crazy because I was with a professional crew and actual actors, and it was an amazing two days. That is a time I'll never forget because it was my first real directing job and I was really young—I was 11—so at the time, I didn't really know what I was doing. But because I had that crew, it uplifted me while I was on set and it made me feel like I could do anything.

What's a typical day on the set?

My job starts way before I step on set. There's a lot of prep work I do way in advance of showing up. Sometimes there's pitching. Then there's casting, which for me is really crucial because everything I do is riding on the shoulders of actors, preproduction meetings, conference calls. Then there's location scouting and tech scouting, which is my time to connect with my team. Sometimes on the tech scout, it takes a moment for the adults to understand that I am the director, but after a couple of minutes of introducing myself and then walking them through the plan, people are prepared. The first day of shooting, I arrive early, make sure I'm in contact with the first AD. I work with my DP and go to the trailers to talk to the cast. I do this to make sure hair and makeup is on track but also to walk the cast through what we're doing. I like to make sure the client and agency are getting what they need. Communication is one of the most important parts of being on set, especially with commercials. 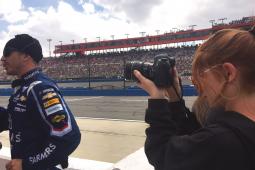 What's the most challenging thing that's ever happened to you on a set?

There have been times earlier in my career where I didn't know the technical stuff. The camera equipment especially. I was really young and it was so confusing for me and I thought I messed up big-time, but I had these people supporting me and teaching me.

Outside of what you've directed, do you have a favorite ad?

I don't know of any brands or commercials that have truly reached the younger audience, specifically teenagers. I think brands don't understand teens. The teen audience is really hard to understand­—I have to give that to them. They're hard to know because they change so much in each generation.

Do you think being a teen director helps you reach your peers?

Do most ads just seem like they're trying too hard?

My generation is really hypersensitive to bullshit. We're independent and strong-willed, and I think that ads have always seemed fake to some extent because they don't know how to reach young audiences. With young creators, it's so much easier for them to be authentic and real because kids are going to say, "Well, if this kid directed the ad, then it must be real." But if it's just some old guy—no offense—who doesn't understand teens, then what's the point?

What do you want more from brands in commercials?

I really like ads that show people taking action. I'm not saying a staged protest, but maybe filming something that actually shows people taking action for a specific cause. For example, the Women's March last year was amazing and super effective. If brands are affected by or can relate to the march, they should film it and it would help get teens out there and it would help the brand.

It's hard to imagine you're typical of most kids. Your whole generation isn't like this, is it?

I'd like to think that this generation is one of the first to really go out there and be actual professionals and do what they want at a young age.

A lot of the obsessive coverage of millennials, the generation just older than you, has come from people who are even older and think of them as kids with unusually demanding or entitled behavior. What do you make of millennials?

I really don't know why people say they're entitled. From what I've seen, they've been really effective in the art world and the creative industry. I find their generation is helping my generation to step up and be creative and be the next protesters or artists or directors.

What's your go-to media on any given day? Do you watch cable TV or any YouTube shows?

I don't watch cable television. I do really like things like Refinery29 or something that is creative but also aesthetically pleasing. I don't watch a lot of YouTube. Right now, I mostly watch films and music videos because it helps me with my inspiration. 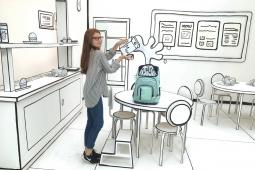 How about social media?

I usually use Instagram for photography. I also like Tumblr. It's a good place to get inspiration from because I'm able to see what other artists do and take that and use it for my art.

Are the so-called influencers of social media as influential over you and your peers as marketers think?

It's hard to say because everyone likes different people. But it's a little more effective to use social media influencers because they're usually saying what they think and talking to a camera, and if they're doing that in an ad, it's easier to see that as real than seeing a celebrity that usually makes music and now is in a shampoo commercial. We know you don't use that shampoo—you're just a celebrity doing this commercial.

Name an influencer you think is doing a good job reaching your age group.

Why Tyler, the Creator?

I believe Tyler's reaching my age group by not caring what other people think and not trying too hard to get the attention of my age group. He just makes content that's irreverent. I know that sounds strange, but that's how I think he's become successful.

What should we expect from the generation after Z?

Every generation gets more and more demanding in doing what they want and really getting stuff done. If they're passionate about something, then you'll just have to deal with that because it's their passion. If my generation is doing this already, then imagine how strong-willed the next generation is going to be.