To kick off the first season of its new 10-year deal, PepsiCo will be deploying more NFL displays than ever before and highlighting blue can Pepsi. 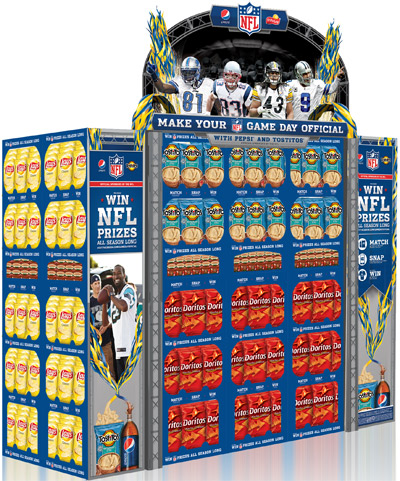 The company signed a new 10-year deal with the league that takes effect this year. The deal is one of the largest sponsorships to date in U.S. sports, valued at $2.3 billion, according to reports. One key difference with the new deal is the expansion to include five of the company's trademarks, up from three. Tropicana and Quaker Oats were added to the lineup, which already included Pepsi, Gatorade and Frito Lay.

"NFL has the largest female fan base of any league. It's a family sport," explained Jennifer Storms, senior VP-global sports marketing at PepsiCo. "When we looked at renewing, it was a great opportunity to bring in other PepsiCo brands, because moms and kids are engaging with NFL more and more every year."

The 2012 season will be PepsiCo's biggest "Power of One" effort yet, with 23,000 NFL displays expected to be in market at the start of the season. That's a 30% increase over last year. Power of One is PepsiCo's plan to plan to leverage its snacks and beverages brands together globally. In February, PepsiCo said it planned to spend up to $100 million on things like in-store display racks. The company is also investing an additional $500 million to $600 million to advertise its brands, with a focus on North America.

Ms. Storms says the company's research with the NFL proves customers are more likely to purchase PepsiCo products when they display, or are associated with, NFL marks. "It's a huge passion point," she said. "Consumers want NFL. We're making sure we're relevant and relating to them, that 's what drives them to purchase."

For example, in the Pittsburgh market, Pepsi Max will debut a limited-edition can featuring the Steelers. In total, the company is working with 50 top customers on customized in-store promotions-22 of the NFL's 32 teams partner with PepsiCo.

In a shift, blue can Pepsi will again be at the forefront this season, a place filled by Pepsi Max the last two years. The company aims to highlight its "Live for Now" campaign, launched in May, explained Angelique Krembs, vp-marketing for the Pepsi trademark. Pepsi is also the official sponsor of the Super Bowl Halftime Show and is introducing the Pepsi NFL Anthems program. That program includes anthems from Kelly Clarkson, Travie McCoy, Ice Cube and Kid Rock honoring their favorite teams.

"When Pepsi Max relaunched, we wanted as much visibility as possible, so we leveraged the NFL very broadly," Ms. Krembs explained. "Now we have 'Live for Now' with Pepsi, so there's a lot of visibility with Pepsi, and you'll see Pepsi playing a much bigger role."

Ms. Krembs said Pepsi Max would continue to be involved in more targeted NFL programs and the Pepsi Max driver would remain a part of the brand's advertising. Quaker has a program, NFL Play 60, supported by Andrew Luck, rookie quarterback for the Indianapolis Colts, launching Sept. 4. As part of the program, kids are asked to pledge to be active at least 60 minutes per day. Meanwhile, Doritos is expected to 'Crash the Super Bowl' for a 7th straight year. Tropicana is expected to join the fray in the latter part of the season.