Growth Has So Far Been Rock Solid, But Can It Become Profitable?
READ THIS NEXT
TV's most expensive shows for advertisers this season 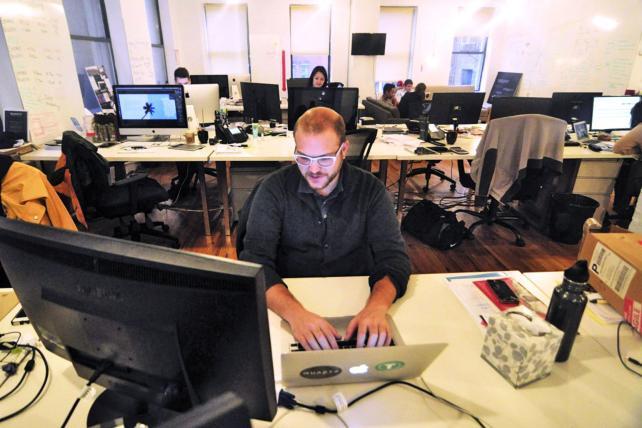 Quartz staffers at work in their New York office.
Credit:

When Atlantic Media introduced business-news publication Quartz in September 2012, it spent about $10 million on the launch, according to people familiar with the matter. That's a far cry from the more than $100 million Condé Nast dropped in 2007 rolling out its glossy business magazine, Portfolio. After just two years, amid stiff economic headwinds, Portfolio folded.

Unlike Portfolio, Quartz is digital only -- existing purely as a web and mobile site. Two years after its introduction, Quartz has surpassed 10 million monthly readers in the U.S., reached eight figures in revenue and moved into a larger office in New York City to accommodate its growing staff. Last year, Quartz hired 30 new employees. There are nearly 30 job openings on its career site now.

"Quartz is a breath of fresh air, especially compared with the legacy publishers," said Brian Ko, managing partner-digital at media agency MEC. "It's also, for lack of a better word, innovative," he added, citing Quartz's sleek, mobile-first look and emphasis on native advertising, where ads are meant to look like editorial content on the site.

But the question looming over Quartz is whether it can continue to grow its audience, add revenue streams and start throwing money to its owner Atlantic Media.

The site is relatively small. In November, Quartz attracted 7 million unique visitors in the U.S. across desktop and mobile devices, according to ComScore. A Quartz spokeswoman, who cited internal figures, said U.S. unique visitors topped 9 million in November and 10 million in December. More than 40% of the site's traffic comes from outside the U.S.

During the same period, Business Insider had 37 million U.S. unique visitors; The Wall Street Journal racked up 19 million; and Fortune attracted 8 million, according to ComScore.

Quartz is unprofitable, though its executives say that's by design. "The prudent thing to do in this stage is to invest in more sales staff, more journalists," said Kevin Delaney, Quartz's editor-in-chief and president. The site relies almost entirely on advertising for revenue, which was roughly $10 million to $12 million in 2014, according to people familiar with the company. Quartz execs declined to offer specifics on the site's revenue or start-up costs.

"There's still a lot of headroom in growth in terms of basic ad revenue and traffic, but I don't think you have to have 100 million or 60 million in audience to be a successful business," said Jay Lauf, Quartz's publisher and president. "I think it's more about, do you focus on a targeted audience, a targeted mission? That's the difference between us and Business Insider, for example."

Quartz is gathering momentum by appealing to a very specific audience: the high-earning business elites jetting between New York, London and Hong Kong. Advertisers will pay more to reach this audience because they're seen as big spenders. Magazines like The Economist and Fortune already had a lock on those audiences in print. So Atlantic Media execs -- including then-President Justin Smith, now CEO of Bloomberg Media -- sought to outflank the legacy publishers in the digital space.
But they also wanted to bypass so-called commodity news -- the stories everyone covers -- or approach that news from a unique angle.

"One of the bets that we're placing is to try to avoid slugging it out in the commodity space, where you need 100 million unique visitors to sell $2 banner ads to make any revenue," said Mr. Lauf. He would not discuss advertising rates, but people familiar with the company said Quartz is charging about $70 for every thousand ad impressions. That may also include impressions on Quartz's email newsletter and production costs for creating ads, these people said.

"It's on the higher side, comparatively," Mr. Ko said of Quartz's advertising rates. But Quartz ads also see better engagement, he added.

"You don't see banner ads and boxes on the site because we're trying to provide a better, richer and therefore more valuable experience," Mr. Lauf said. None of Quartz's inventory is available via automated exchanges, such as Google's DoubleClick.

"We're doing the kind of publication that we ourselves want to work for and would want to read," Mr. Delaney said. That means, for instance, writers cover "obsessions," not traditional beats. There's also an emphasis on visual storytelling.

The Daily Brief, Quartz's email newsletter, has 103,000 subscribers, according to Mr. Delaney. Although that's a relatively small number, between 40% to 50% open the email. Other media companies struggle to reach even half that percentage.

In 2015, Quartz plans to tackle video, an area with intense demand from advertisers. It will also look to grow its revenue streams beyond advertising. "We have a very aggressive growth plan for our events business," Mr. Lauf said. "You can imagine other revenue streams down the road."