Randall Rothenberg Talks About Coming Back to IAB

And What He Found at Time Inc.
READ THIS NEXT
Snapchat strikes deal to sell local ads through newspaper giant Gannett

At the Interactive Advertising Bureau's conference on Feb. 28, Randall Rothenberg could barely get a bite or a word out before someone in attendance came up to quickly offer thanks for his return. "So glad you're back," one woman said, before sauntering off in the Palm Springs sunlight. 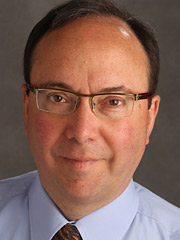 Randall Rothenberg
Mr. Rothenberg was re-hired as CEO of the IAB in February, just a little more than a month after he left to join the ranks of Time Inc. as its chief digital officer only to see the man who hired him abruptly ousted. Now Mr. Rothenberg is enthusiastic about his return to the trade association that he had helmed for four years.

Ad Age sat down with Mr. Rothenberg at the conference to discuss IAB's works in progress and the state of the digital media industry.

Ad Age: So, what happened at Time Inc.?

Mr. Rothenberg: I'm not going to talk about Time Inc.

Ad Age: But I see you're still using your Time Inc. email address.

Mr. Rothenberg: Yeah, I'm still working there for a week -- it's a role I have at least through Friday. I'm here as chief digital officer of Time Inc., and co-host of the conference.

Ad Age: When last we spoke, I was congratulating you on your new gig, and I guess I'm doing that again. How does it feel to be back at the IAB?

Mr. Rothenberg: I wasn't really gone. I was gone for basically a month. it doesn't feel different from November. My friend Michael J. Wolf, my mentor at Booz Allen, called it my gap month. My wife called it my junior-year abroad.

Ad Age: Tell me what you learned from your experience at Time Inc. then.

Mr. Rothenberg: It was like having a deeply intensive consulting gig -- we shouldn't dignify it as more than that. One thing I learned is that clearly publishers of all stripes are obsessed with selling subscriptions on tablets and alternative distribution mechanisms, alternative content monetization mechanisms. And I don't think I really had confronted it as viscerally as I did during the month working directly in that area at Time Inc.

One of the things that became clear to me is that publishers really don't have the thought leadership forums that they really need to have to discuss and trade ideas around the set of questions relating to those areas.

Ad Age: What do you mean by "thought leadership"?

Mr. Rothenberg: Let's take a step back. When I got recruited to IAB the first time, in late 2006. And [AOL CEO] Tim Armstrong was, is, a friend of mine, and he was on the IAB board, and he said, "You should do it." I said to Tim, "Trade associations can choose to specialize in one of several areas: policy and lobbying or conferences and events or a members-services organization. What is it here?" And he said, "Thought leadership, hands down." That was interesting. He said, "Thought leadership is the magnet that gets people in the room. Once you've got them into the room, you can coalesce them around making change happen. That really connected with me."

Ad Age: That's what you had been doing at IAB.

Mr. Rothenberg: Well, in my "first term," yeah -- bringing smart people into rooms and having structured conversations around issues, helps you understand what's going on and helps you discover what a trade association can do that's concrete on behalf of your members.

Ad Age: I guess some examples now are online privacy initiative by IAB along with the other trade associations, as well as the Rising Stars contest with the new online ad formats.

Mr. Rothenberg: What Rising Stars emerged from was this whole war that began five years ago between publishers and networks, and you'd see it break out in IAB board meetings where publishers would point fingers at networks and say, "You're commoditizing our inventory!" And networks would be saying, "Well we're not selling anything you're not already giving us!" And we started confronting this question of declining CPMs, which obviously had represented the notion of declining value.

Ad Age: So how will print publishers win online?

Mr. Rothenberg: Well, first of all, anyone can win online. The first way you win online is you don't think of yourself as a print publisher a television producer or a radio broadcaster. You think of yourself as a collection of assets and capabilities, and how that translates to customers online. What marketers want more than anything else are multiplatform efforts. They want to be able to have an enormous amount of integration within the lives of the consumers and potential consumers. It's not just print plus TV plus digital. It's how do you encourage sharing -- these are buzzwords, but if people are actively sharing, if they're participating with you, that has demonstrable value to the future of the brand.

Digital native publishers don't have these multiplatforms, but they are more adept because they're not carrying legacy operations.

Ad Age: What should we expect from IAB in the coming months?

Mr. Rothenberg: The reason I came back is we had put in place before I left a number of really phenomenal opportunities. The Mobile Marketing Center of Excellence, for one. And in the next month or two, we're going to open up the IAB Ad Lab. We leased 3,000 square feet on the eighth floor of our IAB headquarters. It's going to be a space where we can have smaller conferences. And also this year, we're building out the IAB roadshow -- it's training and development out to the rest of the country so we become less San Francisco-New York focused. I'm really looking forward to all these things coming out this year.