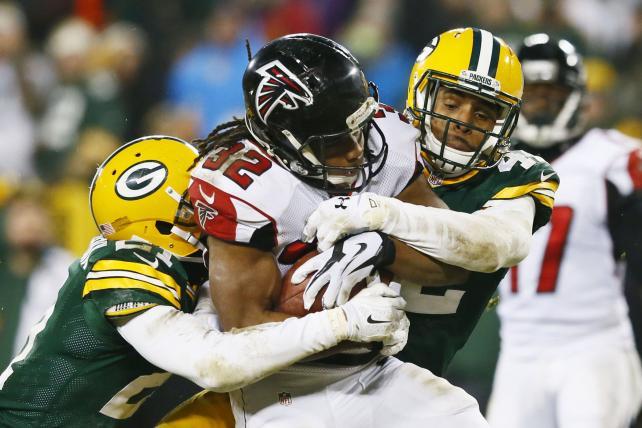 The NFL's season-long ratings decline may have left the league's network partners on the hook for a heavier-than-usual allotment of makegoods, but the overall diminishment of football's massive TV audience didn't put a dent in broadcasters' wallets.

According to iSpot.tv estimates, despite an 8% decline in overall NFL deliveries, in-game ad sales revenue increased 4% to $3.36 billion during the regular season, up from $3.22 billion during the 2015 campaign. Steady demand, increased unit costs and a shift of two games from cable to broadcast TV helped offset a ratings squeeze that in November saw as much as 20% of available NFL inventory being freed up for makegoods/ADUs. (The acronym is shorthand for "audience deficiency units," industry lingo for the compensatory ad units the networks provide to advertisers in order to make up for under-deliveries.)

If the four-month national debate over what may have precipitated the unexpected ratings contraction may never be resolved, that the networks were able to step up their ad game in the midst of all those ADUs should serve as a reminder that this is the NFL's world, and the rest of us just live in it. There isn't a scripted TV show that can come within spitting distance of the sort of ratings the NFL puts up week after week, and football's massive reach -- the 4:20 p.m. national windows on Fox and CBS together averaged 23.7 million viewers, drawing nearly 10 million more consumers than the most-watched scripted offering, "The Big Bang Theory" -- goes a long way toward explaining why demand rarely flags for clients who have the means to buy time in the games.

Speaking of clients with money to burn, another strong showing by automakers contributed to the NFL broadcasters' big year, as manufacturers ponied up $751.5 million for in-game inventory, which marked a 5% increase over last season's $716.9 million. Steep increases by other categories helped account for the year-over-year gains in overall sales revenue; per iSpot, wireless ad spend jumped 39% to $259.8 million, insurance was up 19% to $195.4 million, mobile devices upped the ante by 22% to $150.5 million and financial services injected 33% more cash into NFL games, with an overall investment of $131 million.

The single biggest NFL backer this season was Verizon, which has served as the league's official wireless sponsor since 2010. According to iSpot, the phone company spent $149.2 million on in-game airtime, up 62% compared to the year-ago $92.4 million. In fact, nearly all of the top advertisers upped their spend in 2016 -- Toyota's outlay increased 9% to $88.7 million; Geico was up 21% to $79.6 million; Chevrolet shelled out $75.6 million, which translated to an 18% uptick, and Apple's iPhone soared 69% to $70.6 million.

Oh, and, despite making some noise a few weeks back about looking for ways to pare back in-game commercial breaks, the NFL itself ramped up its own in-game ad spend to the tune of $86.1 million, which marked a 25% hike compared to last season's $69.1 million.

The overall increase in NFL dollar volume was largely a reflection of the increase in the cost of a half-minute of commercial inventory. According to Standard Media Index estimates, the average going rate for 30 seconds of in-game airtime increased 6% this season to a hair under the half-million-dollar mark ($499,095).

SMI, which aggregates its data directly from the billing systems of a group of media agencies that accounts for 75% of all U.S. ad spending, noted that three Thanksgiving Day NFL games fetched the highest prices of the season. Fox's Turkey Day presentation of the Washington-Dallas game not only drew the biggest crowd of the regular season (35.1 million viewers), but commanded the loftiest rate with an average unit cost of $1.1 million per 30-second spot. NBC's prime-time clash between the Steelers and Colts was priced at $942,391 a pop, while time in CBS' early Vikings-Lions brawl cost $860,095 per :30.

All of the bonus green that poured into CBS, Fox, NBC, ESPN and NFL Network more than alleviated any concern for the loss of a daily fantasy sports category that in the last 12 months has assumed a decidedly low profile. A year ago, DraftKings and FanDuel combined to spend $107.2 million on in-game, regular season NFL broadcasts, effectively establishing the two companies as a top 10 category unto themselves in their very first appearance on the national stage. Facing all matter of regulatory migraines and an impending merger, the DraftKings and FanDuel in 2016 effectively put the kibosh on any major broadcast investments, winnowing down their in-game NFL spend to just $3.29 million.

For all that, a few blue chip sponsors did reduce their in-game spend, including Ford, which downsized its NFL commitment by 14% to $69.5 million; Southwest Airlines, which trimmed its game-day orders by 10% to $58.2 million, and, as we reported at the beginning of the season, Nissan. The automaker shifted a chunk of its marketing dollars from the NFL into college football, and in doing so, spent nearly half of what it invested in pro football back in 2015, laying out $45.4 million compared to the year-ago $81.4 million.

The NFL windfall continued into the postseason, as iSpot eyeballed the overall ad spend for the 10-game playoff slate at some $792.9 million. All told, advertisers funneled a whopping $4.01 billion into the 266 games leading up to Super Bowl LI. With a going rate north of $5 million per 30-second spot in the Falcons-Patriots game, Fox looks to add another $380 million or so onto that already towering stack of bills.