In a Summer of Juiced Balls, the MLB All-Star Game Fails to Take Flight | Ad Age
Skip to main content

In a Summer of Juiced Balls, the MLB All-Star Game Fails to Take Flight 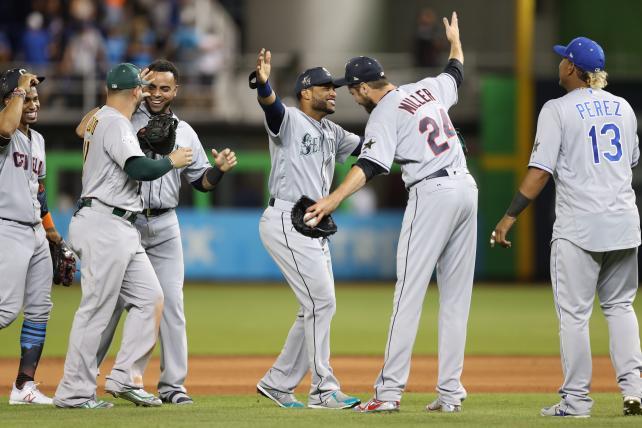 Robinson Cano and Andrew Miller celebrate after winning this year's All-Star Game. Fox might not be as thrilled with its results.
Credit: Allen Kee / ESPN Images

According to Nielsen live-plus-same-day data, the American League's 2-1 victory over the National League averaged 9.28 million viewers and a 5.5 household rating, and while those numbers were up marginally compared to last year's historically low draw of 8.71 million viewers and a 5.4 rating, they were still far from encouraging.

Not only did Tuesday night's results mark the second time a Midsummer Classic has averaged fewer than 10 million viewers, but in keeping with the ongoing greying of baseball, many of those who did tune in were a bit long in the tooth. The median age of the viewers who watched the game was 56 years, up from 54.6 years in 2016.

By way of comparison, Tuesday's All-Star Game was routed in the demo by the previous night's Home Run Derby on ESPN, which drew a 2.9, or 3.53 million adults 18 to 49.

Billed as a moonshot youthquake because of the fresh-faced talent set to play, the 2017 installment of the All-Star Game turned out to be a rather ruthless celebration of high-velocity pitching prowess. While baseball purists may live for that sort of display (pitchers on both staffs rung up a combined 23 strikeouts), casual fans generally don't tune in to watch hitters have the bat taken out of their hands. As the radar guns kept registering pitches that exceeded 100 mph, sluggers like Aaron Judge, Giancarlo Stanton and George Springer failed to lay wood on the ball.

If it wasn't much fun to watch from home, it couldn't have been tremendously engaging for those at the stadium, either; fans could be seen making their early exit from Marlins Park well before the AL squad slammed the door on its fifth straight win.

In one noteworthy change, Tuesday's result won't have an impact on October baseball, as MLB commissioner Rob Manfred has elected to junk the longstanding rule that gave home-field advantage in the World Series to the team representing the winning side in the All-Star Game. Instead, winning percentage will determine how the Fall Classic schedule will shake out. (If the elimination of that particular incentive gave rise to a few memorably light-hearted moments -- before he stepped up to the plate in the the sixth inning, Nelson Cruz asked his pal Yadier Molina to take his photo alongside umpire Joe West -- there's nothing in the Nielsen data that suggests the rule change had an impact on the ratings either way.)

Among the more conspicuous advertisers featured throughout the Fox broadcast were official MLB sponsors MasterCard and Chevrolet. Also suiting up were wireless providers Verizon and Boost Mobile and automaker Lincoln.

Fox devoted just one 30-second spot to promote its upcoming fall lineup, putting the spotlight on "The Gifted," an X-Men-adjacent action/adventure strip set to premiere on Monday, October 2.