But Will Fight Card Switcheroos Put a Damper on the MMA Event?
READ THIS NEXT
From News Scoops to Buzzer-Beating Hoops, Live TV Continues to Deliver 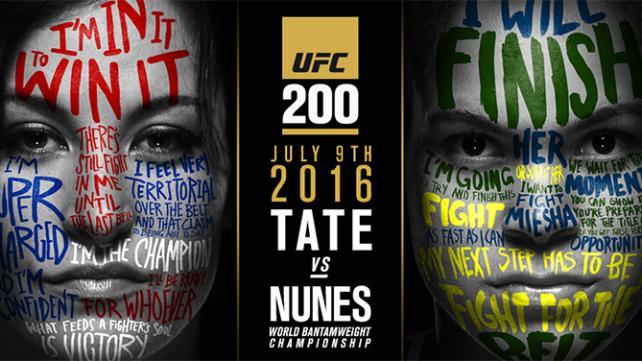 Despite a hastily revamped main event and the absence of one of the sport's biggest box office draws (and most out-sized personalities), the UFC remains confident that it will shatter its all-time pay-per-view record with Saturday night's UFC 200 event.

After interim light heavyweight champ Jon Jones was pulled from his main event rematch with Daniel Cormier in the wake of an apparent doping violation, the UFC on Thursday promoted the women's bantamweight bout between Miesha Tate and Amanda Nunes to the top of the fight card. That move came just a day after UFC president Dana White initially announced that returning fan favorite Brock Lesnar's bout with Mark Hunt would occupy the main event slot.

The status of the UFC 200 fight card seemingly has been in flux since April, when the mercurial Irish brawler Conor McGregor was bounced off the ticket after failing to attend a mandatory press conference. While the popular Mr. McGregor is one of the sport's top draws, the UFC was quick to bring in perhaps an even bigger star in Mr. Lesnar, whose manhandling of Frank Mir in 2009 helped it set a record with 1.6 million pay-per-view orders. (Mr. McGregor's loss to Nate Diaz in UFC 196 was instrumental in securing the second-highest PPV tally; according to Mr. White, that event notched 1.5 million orders.)

"This will be our biggest pay-per-view event," said Marshall Zelaznik, exec-VP and chief content officer, UFC. "We've made sure that all our distribution partners are prepared for an onslaught. Every effort has been made to prepare for the crush of orders. It's a monumental moment for us."

Fight fans can order the UFC 200 through their cable or satellite providers or stream from UFC.com across devices such as Xbox 360, Roku, Apple TV, PlayStation 4 and Amazon Fire TV.

Mr. Zelaznik said he believes the turnout for UFC 200 will be commensurate with the unprecedented show of talent that will suit up for the event. "When boxing was at its peak, there was always a moment when there was a fight where the world would just stop everything and watch," he said. "We think UFC 200 is going to be another big 'stop and watch' event."

While UFC 200 is obviously top of mind for Mr. Zelaznik, the more distant future also looks rather promising from where he's sitting. The sport's seven-year, $630 million deal with Fox Sports expires in August 2018, and while both sides seem extremely satisfied by their partnership, a renewal almost certainly will come with a much higher price tag.

"We are keenly aware of how the Big Ten deal leaves us, without a doubt, as the most valuable sports property that is nearing the end of its current media rights deal," Mr. Zelaznik said. "We love our relationship with Fox, and while we are not in negotiations at this point in time, there will come a day when we'll have to come together to talk about a new deal."

Mr. Zelaznik notes that UFC programming has been a ratings leader for FS1, which in early 2015 drew 2.75 million viewers and a 1.4 rating with its Conor McGregor-Dennis Siver fight. That marked the biggest audience for a mixed martial arts event on ad-supported cable in six years and more than nine times larger than the average FS1 prime time delivery. It's also the youngest-skewing sport and, alongside the NBA, one of cable's biggest suppliers of males 18-to-34 and 18-to-49.

If UFC execs are looking forward to another big windfall, at least one of the sport's brightest lights thinks that Saturday night's card will fall short of a record payout. Speaking at a press conference Thursday, Mr. McGregor said he doubted that UFC 200 would out-earn UFC 196.

"I think bringing Brock back was the attraction to the card," Mr. McGregor said. "I think it will do OK numbers but it still won't take UFC 196 off the top spot, no way." While UFC 196 didn't garner as many pay-per-view orders as the UFC 100 card, Mr. McGregor's rough night did generate more revenue -- an estimated $90 million versus the earlier event's $82 million.

Eyes shielded by a pair of sunglasses, the grinning, gum-smacking Mr. McGregor offered his services to UFC officals who were "running around like headless chickens trying to get everything right." Tossing a sidelong glance at Mr. White, the fighter said, "I'm here. I'm in shape. All they have to do is ask."