Picks Up Second Season of 'Style Out There'

Ms. Emmerich, who was senior-VP programming for Scripps' Ulive digital lifestyle network, has also worked at Vice and the Scripps-owned Travel Channel, where she helped develop "No Reservations," the food-travel show hosted by current CNN personality Anthony Bourdain.

Her hire comes as Refinery29 plans the second season of its own version of a globe-trotting, Anthony Bourdain-style digital video series, "Style Out There," which follows host Asha Leo around the world in search of fashion subcultures.

The site is also working with production company Relativity Media to bring the series to linear TV. Currently, the series appears on Refinery29.com, its YouTube channel and Facebook page.

"It's still in the works," Justin Stefano, Refinery29's co-founder and co-CEO, said of getting "Style Out There" on TV.

The series is comprised of six episodes that are seven to eight minutes long, as well as a number of shorter clips. Ms. Leo meets couples who wear matching clothes in Korea, a pair of Brooklyn-based Hasidic hipster designers and a group of Indian people considered part of a third gender.

Refinery29's video efforts -- which include tutorials as well as the documentary format of "Style Out There" -- follow a prevailing trend among publishers: pouring resources into digital video, where interest from advertisers and consumers has surged. BuzzFeed, for instance, is using private-equity dollars to fund a video studio; Vogue publisher Conde Nast has spent tens of millions on its video arm Conde Nast Entertainment; and Vice has built a sprawling multimedia company on the back of its video efforts.

The demand for video was so high among advertisers in the fourth quarter of 2014 that most so-called premium publishers were sold out of ad inventory, according to media buyers.

"Video is one of the fastest growing formats of digital content in news and entertainment," said Adam Shlachter, chief investment officer at DigitasLBi, which helped arrange Motorola's sponsorship of the first season of "Style Out There."

But digital video can also be an expensive trap for media companies. Creating high-quality video -- the kind that major brands want to be around -- is costly. The price of buying equipment and hiring producers, editors and hosts adds up, and digital video can become a money pit if it's not carefully managed.

Mr. Stefano said Refinery29 is making money from video because it looks for brands such as Motorola to underwrite its efforts. Season one of "Style Out There" has racked up more than two million video streams, according to a Refinery29 spokeswoman, citing internal figures.

Mr. Shlachter said Refinery29 reaches the kind of younger, more stylish consumers that Motorola sought for the Moto X phone, the second generation of which was hitting stores around the same time as the October debut of "Style Out There." Timing is partly why Motorola bowed out of season two, he added. 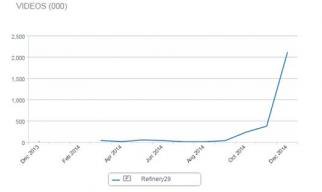 Refinery29's video views increased sharply at the end of 2014.

Refinery29 has not locked down a sponsor for season two, but it is "really far along" with a single advertiser, according to Mr. Stefano. He declined to name the company.

"We're trying to focus on brands we can integrate into videos in really interesting ways," he said.

Once the sponsorship is secured, which Mr. Stefano said should happen in the next couple weeks, Refinery29 will begin production of the series and likely roll it out in late spring or early summer.

Digital advertising is responsible for most of Refinery29's revenues, which were about $60 million in 2014, a person familiar with the company said. Although Mr. Stefano would not discuss revenue or other finances, he said Refinery29 threw off "meaningful" profit last year.