‘Rich Corona, Poor Corona’: NYmag offers a stark look at the economic politics of the pandemic 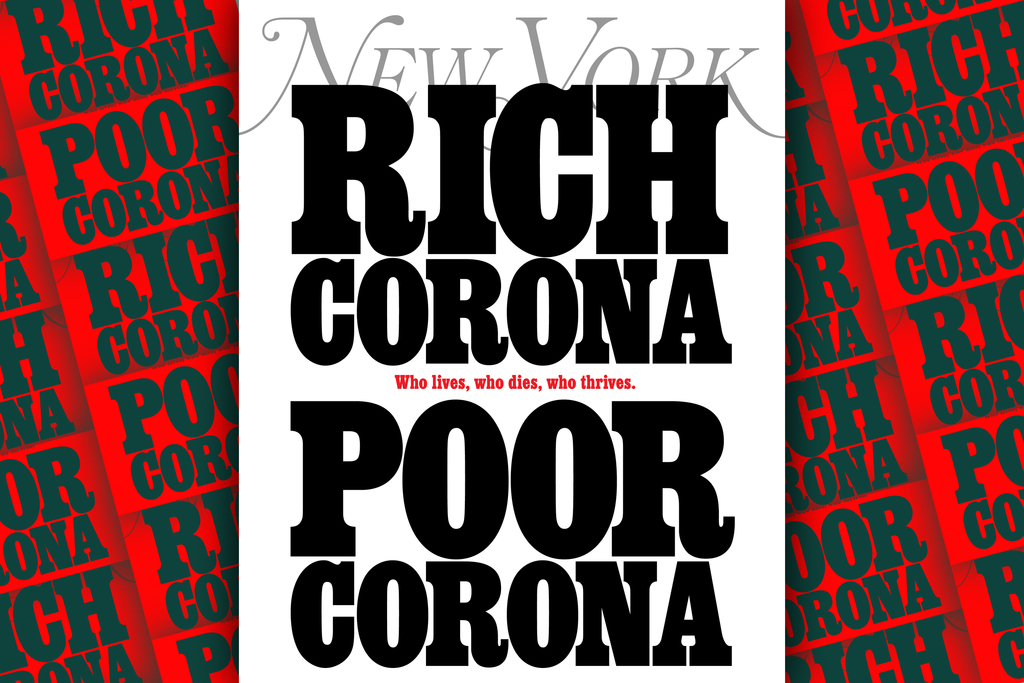 The cover of the April 27 issue of New York Magazine, on newsstands and starting to hit subscribers’ mailboxes today, puts the economic subtext of the coronavirus pandemic in stark relief. The cover headline, “Rich Corona, Poor Corona” (subhead: “Who lives, who dies, who thrives”), promotes a package of interconnected stories including “Are You Rich Enough to Survive This Pandemic?” by Zak Cheney-Rice, “In Conversation: Thomas Piketty” (subhead: “The scholar of inequality warned us that our economic systems couldn’t withstand a global catastrophe”) by David Wallace-Wells, and “American Winner” (subhead: “Treasury Secretary Steven Mnuchin embodies the plutocratic principle that a crisis is a terrible thing to waste”) by Eric Levitz.

In his lead essay, Cheney-Rice details how the pandemic and its economic aftershocks have disproportionately affected poor communities and people of color in the United States, despite politicians’ insistence that COVID-19 doesn’t discriminate. As he writes,

These are the people whose suffering is neglected when terms like equalizer are reduced to platitudes. But neglecting it in practice, as many officials have, also shapes our expectations of what returning to normal looks like. Social conditions that seemed intolerable six months ago have since acquired the sheen of an idyllic recovery. Getting back to work, earning wages again—these are broad improvements over what we have now that, nevertheless, won’t repair the long-standing circumstances of millions whose bigger problems were always structural. That many of us can’t even begin to expect or even conceptualize this—in a moment so desperate, so damning to the notion that America’s best feature is its ability to manufacture prosperity, a reopening where black doesn’t mean sicker, Latino doesn’t mean lower wages, and poor doesn’t mean unreliable food or housing—reaffirms that for millions, normality is cruel enough.