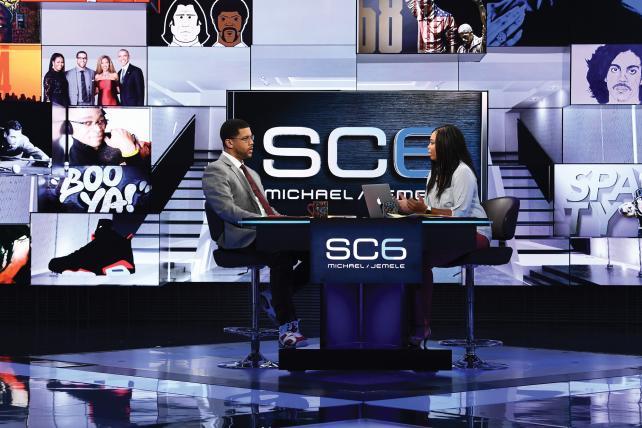 Michael Smith and Jemele Hill, co-hosts of 'The Six,' as the 6 p.m. 'SportsCenter' is now known.
Credit: Joe Faraoni/ESPN Images

Just hours before it will begin televising its comprehensive 2017 NFL Draft coverage, ESPN this morning has begun laying off more than 100 on-air personalities, beat reporters and radio hosts, as well as a number of people who work behind the scenes at the sports colossus.

The staff reductions come as ESPN president John Skipper looks to offset a shrinking subscriber base and a concurrent spike in rights fees. Calls to those who will bear the brunt of the layoffs began earlier this morning, shortly after Skipper issued a memo to employees alerting them of the impending cuts.

"A necessary component of managing change involves constantly evaluating how we best utilize all of our resources, and that sometimes involves difficult decisions," Skipper wrote, adding that the shift in ESPN's content strategy (which is particularly evident in the evolution of its "SportsCenter" franchise) demands a reevaluation of its talent roster.

"Dynamic change demands an increased focus on versatility and value, and as a result, we have been engaged in the challenging process of determining the talent … necessary to meet those demands," Skipper wrote. "We will implement changes in our talent lineup this week."

ESPN is not disclosing the names of staffers who are being let go, but a number of familiar faces have begun making announcements about their own immediate circumstances via social media. Among those who have tweeted word of their status are NFL reporter Ed Werder, "SportsCenter" anchor Jay Crawford, NFL analyst Trent Dilfer, college basketball reporter Dana O'Neil, college hoops analyst Len Elmore, Big Ten football reporter Austin Ward and ESPNW standout Jane McManus.

The layoffs are expected to continue throughout the day. At last count, more than 35 ESPN employees had announced that they have been let go.

This is the second major culling of ESPN staffers in 18 months. In October 2015, the company let go of around 300 employees, none of whom were on-air talent or otherwise in the public eye. That round of cuts came shortly after Disney CEO Bob Iger precipitated a massive media-stock selloff when he addressed ESPN's recent subscriber losses during a quarterly earnings call.

While investors' reaction to Iger's cord-cutter assessment was overblown -- some $50 billion in market value at media giants like Disney, Time Warner, Discovery and Comcast were wiped out in a matter of days -- ESPN's shrinking subscriber count is impossible to dismiss outright. According to Nielsen cable coverage estimates, ESPN last month reached 87.3 million U.S. households, which translates to a penetration rate of 74%. That marked a 4% decline from the year-ago 91 million subs and an 8% drop compared to 94.4 million subs in March 2015.

Nielsen's sub counts do not include streaming/over-the-top services like SlingTV and DirecTV Now, although the ratings company plans to begin measuring those alternative delivery systems in the coming months.

While the rise of cord-cutters and cord-nevers has taken a bite out of ESPN's overall reach, the flagship network's staggering subscription fees pump billions of dollars into its coffers every year. With an estimated affiliate fee of $7.86 per sub per month, ESPN is on track to take in $8.25 billion in subscriber revenue this year alone, a figure that does not include contributions from the spinoff networks ESPN2, ESPNU and SEC Network.

A redefinition of terms
For all the cash ESPN commands from its distributors (and that's without factoring in its lucrative ad sales business), the weight of its content commitments cannot be ignored. Its sports-rights packages with the NFL, NBA and Major League Baseball cost $4 billion per year, and that already-princely sum doesn't include the $608.3 million that ESPN pays for the College Football Playoff or its side deals with top-tier collegiate conferences like the ACC and SEC. The cost of carrying live sports, which is more or less TV's last great reach vehicle, is a necessary evil.

As ESPN looks to strike a more profitable balance between the spoils of its dual-revenue stream and its burdensome rights outlay, it also faces a sea change in how fans are consuming sports content. As is evident by its reinvention of "SportsCenter," scores and highlights just don't cut it anymore when most sports enthusiasts carry the world around in their front pocket. Linear TV and digital media are now inexorably intertwined, and the division of on-air and online content into two discreet entities is going the way of the single-wing formation.

"We definitely think that you can build a relationship with the audience beyond the bounds of when you're on the air," said Rob King, senior VP of ESPN's SportsCenter and News divisions, in a March interview with Advertising Age. "In order to do that, you have to be able to produce things that can be lifted out of the show and placed on other platforms that aren't as reliant on being timely."

From his office in ESPN's Central Connecticut compound, King monitors his shows' social-media activity by way of an app known in-house as the Producer Panel. The program provides King with a dynamically updated readout of what the 31.9 million million Twitter users who follow the @SportsCenter handle are engaged in at any given moment, which in turn allows the show's producers to plan segments that are more relevant to the fans' immediate interests.

"Our attempt to explore the reach of 'SportsCenter' across all platforms is really about a two-way street," King said. "It's not necessarily just that we're publishing everywhere -- we are actually listening. I think social listening is incredibly important to how we look at what we're doing now and how we look at what we're going to be doing in years to come, and it makes us smarter."

Jemele Hill, the co-host of ESPN's newly-revamped 6 p.m. "SportsCenter," believes that the evolution of how sports content is disseminated and devoured is necessarily having an impact on the product itself. "The narrative is that the traditional highlight, to some extent, is dead, but it's more a matter of how you define your terms," Hill said in March. "Viral videos, amateur videos, funny things that happen in the stands -- people cannot get enough of that. And that in itself is a highlight. There's an entire conversation and culture happening around sports that goes beyond who beat who and who scored what."

All of this is emblematic of the new-look ESPN, where on-air talent increasingly are challenged to carry a full set of 14 clubs in their metaphorical golf bags. Versatility is the byword; your short game has to be as effective as your drives. It's no longer a question of showing up for your hour or your segment and then punching out -- staffer contributions are now expected to be as fluid and diverse as the various platforms on which they appear.

As King and his colleagues labor to keep 'SportsCenter' relevant -- a new morning show helmed by "Mike and Mike'' co-host Mike Greenberg is expected to be unveiled during ESPN's May 16 upfront presentation -- the network will have to make do without more than a few people who helped make it a success. At press time, phones were still ringing in Bristol.