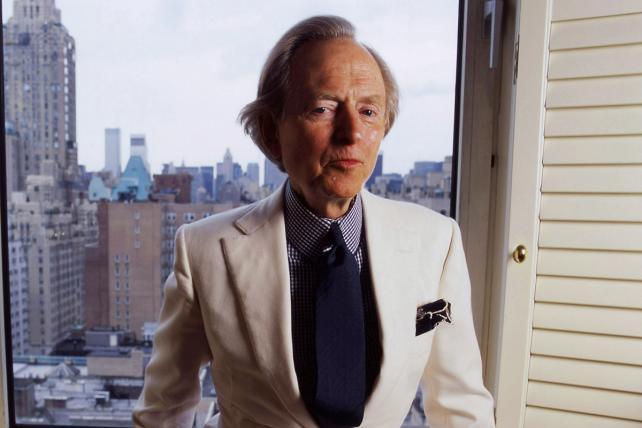 The author Tom Wolfe, who died Monday at 88, is being remembered with a lot of richly deserved encomiums, including "genre-breaking" (NPR), "iconic" (GQ) and "pioneering" (The Guardian). The New York Times even called him "pyrotechnic" in the loveliest obit—"Tom Wolfe, Pyrotechnic 'New Journalist' and Novelist, Dies at 88"—I've seen so far.

... technicolor, wildly punctuated prose brought to life the worlds of California surfers, car customizers, astronauts and Manhattan's moneyed status-seekers in works like "The Kandy-Kolored Tangerine-Flake Streamline Baby," "The Right Stuff" and "Bonfire of the Vanities" ... His talent as a writer and caricaturist was evident from the start in his verbal pyrotechnics and perfect mimicry of speech patterns, his meticulous reporting, and his creative use of pop language and explosive punctuation.

I'll remember him for all of those reasons—and for being a rather cunning marketer. Wolfe helped us all understand Wall Street's "masters of the universe" (in "Bonfire"), but he himself was a master of the media.

I remember the first time I saw him in the flesh—leaving Rolling Stone's New York offices on Sixth Avenue as I was entering. (Rolling Stone founder Jann Wenner was an early Wolfe patron, most notably serializing a draft of "Bonfire" in his magazine in the '80s.) All heads on the sidewalk turned because, yes, Wolfe was wearing one of his signature white suits. I remember thinking: Wow, he really dresses like that in real life—not just for photos. And: How wildly impractical for grubby Manhattan.

But his sartorial statement was a form of admirably persistent branding that served him well. He knew that you have to do a lot of wildly impractical things to get and stay famous. (How many writers remain paparazzi-magnets their entire lives?)

He also knew his way around a media brawl. In 1998, when Wolfe's "A Man in Full" was published and became an instant best-seller, John Updike called it (in The New Yorker, no less) "entertainment, not literature." And then Norman Mailer (in The New York Review of Books) said it was "a 742-page work that reads as if it is 1,500 pages long." And John Irving (on the Canadian TV show "Hot Type") called Wolfe's work "yak" and "journalistic hyperbole."

It's worth noting that this was the era of the fearless literally feud—when larger-than-life men of letters weren't shy about throwing shade. (Mailer, for instance, had already famously said of Wolfe, "There is something silly about a man who always wears white, especially in New York." As the Times obit notes, Wolfe had a sense of humor about his trademark outfit, once having called his style "Neo-pretentious.")

Wolfe was happy to take the bait, dismissing his critics as, basically, the Three Stooges of literature.

"I think of the three of them now—because there are now three, as [in] Larry, Curly and Moe—and it must gall them a bit that everyone, even them, is talking about me," he later told "Hot Type." Wolfe continued to pummel Updike, Mailer and Irving, calling them talented writers who "wasted their careers."

I happened to talk to Wolfe years later about his war of words with his fellow authors (for a Playboy story about literary feuds) and it was pretty clear he had a sense of mischief and sport around it all. And he was amused at my suggestion that it'd be fun to watch him and his peers—at the time, all old men growing rapidly older—step into a ring. "We could probably blow each other over in one breath," Wolfe told me, laughing.

Throwing around insults he was definitely up for. Throwing fists, not so much.

Tom Wolfe was a man who fully and truly understood—in his gut, in his bones—the job description of "literary icon."