Former Maxim and Rolling Stone Publisher Joins First Magazine He Subscribed to
READ THIS NEXT
Why major networks are investing in streaming services—and advertisers should follow
Rob Gregory
Credit:

Newsweek and The Daily Beast are getting a new sales and marketing chief on Monday: Rob Gregory, who is leaving his post as president of Plum TV after more than three years to become president at the Newsweek Daily Beast Co., a newly created post.

It's not a bad fit for Mr. Gregory, who is not only reuniting with Newsweek Daily Beast Co. CEO Stephen Colvin, a former colleague at Dennis Publishing, but also trying to help renew the first magazine he ever had a subscription to.

But a surge in attention and interest for Newsweek under editor Tina Brown hasn't been matched by advertising. Although Newsweek likes to point out that issues after Ms. Brown's March 14 redesign averaged 88 more ad pages than the January, February and March issues immediately preceding it, the industry usually measures performance against the equivalent period a year earlier. And Newsweek's ad pages in the second quarter fell 24.5% from the second quarter of last year while rising at Time , The Week and The Economist, according to the Publishers Information Bureau.

Advertising Age: What are Newsweek and the Daily Beast doing right?

Robert Gregory: Remember that the magazine just redesigned a few months ago, in March, so we're not very far into the arc of this at all. They've very quickly established a voice that 's fearless, that 's smart, that 's bold and that is not afraid of having an attitude. Obviously the world that educated successful people live in now is getting more confusing and uncertain by the day, with the economy, America's place in the world, the election coming up. All of this confusion and uncertainty that 's on the rise in American life just cries out for a modern, smart entity that can help you make sense of it. 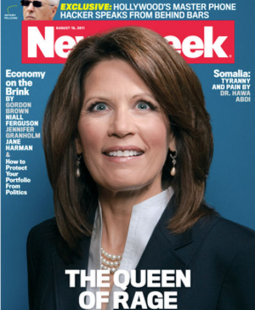 And, by the way, if there was any question about an iconographic magazine cover's ability to stir up debate and controversy and to make people really agitated, I submit the Michele Bachmann cover as a great example of that . I remember joking that if she wins in Iowa, everyone's going to want one of those covers, and she did.

So I think the debate is already shifting, from "Will this succeed?" to more of "How much can it succeed and how far can it go?"

And I would also argue that if you look at just recent history at how certain organic digital brands, which is what The Beast is , can explode on the web, it's happened with a lot less talent than they've got over there.

Ad Age : So what are you going to help them do better?

Clients want ideas. There's an insanely high number of media options now and all these technical ways of reaching an audience are exploding in front of us, but at the end of the day what clients want is an idea. Yes, build it out and push it in as many relevant directions as you can, but at the center of it is the idea and that 's something I can bring. That's always been central to my selling style, to have a really clear idea at the center of the selling proposition.

And what agencies want now is really crisp smart integration. Obviously people love new things. If you can optimize this sort of tantalizing combination of the newness of the Newsweek Daily Beast with the established journalistic clout of Newsweek and even the Daily Beast, which is an established web presence now, there's a 'there' there.

I think the new redesign is starting to really settle on a rhythm now. And the fact that so many readers and the longtime legacy Newsweek fans are responding means there's a lot of good stuff there. And by the way I'm one of them. It was the first mag subscription I ever had. My dad got me a subscription. The first issue I got, I was horrified to see that Nixon had resigned.

Let Tina's voice be heard. She's a risk-taker and I would expect a lot more covers that are going to provoke and even agitate and I think that 's a great thing. It's all about relevance and bearing heard among the crescendo of voices.