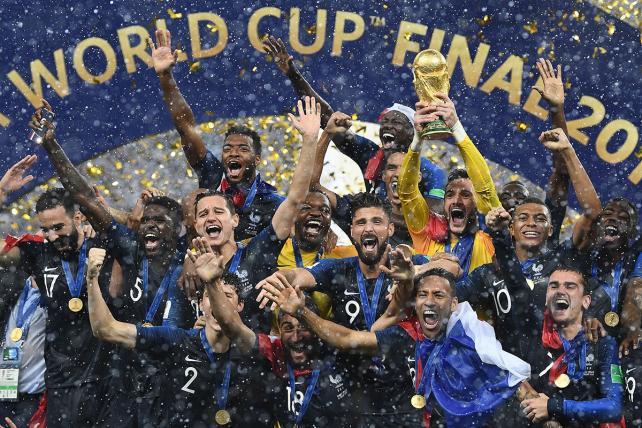 A distillation of an entire month of soccer in two 45-minute halves, Sunday's 2018 FIFA World Cup Final offered fans a taste of just about everything that made this year's tournament such a wild ride. Unfortunately for Fox, the only thing missing from the France-Croatia match was the sort of massive audience the broadcast deserved.

According to Nielsen live-plus-same-day data, France's 4-2 victory over Croatia delivered an average 11.3 million viewers, or whom 5.06 million, or 45 percent, were members of the 18-to-49 demographic that advertisers most covet. The broadcast, which featured France's second World Cup title in 20 years, averaged a 6.2 household rating.

As has been the case throughout this year's World Cup, Fox's ratings fell well short of the kind of numbers ABC scared up four years ago; per Nielsen, that Germany-Argentina contest drew 14.1 million viewers, which translates to a 20 percent decline for Fox in its inaugural men's Final. Fox's average household rating marked a 17 percent drop-off compared to the 7.5 rating ABC drew in 2014.

The stats from 2018 and 2014 include 20 to 30 minutes of pre-game coverage. Earlier press reports have compared Fox's results to ABC's in-game deliveries, which offer a far more lopsided comparison. Isolating the Nielsen data for the coverage of the match itself, Fox's broadcast averaged 12.5 million viewers and a 6.8 household rating, down 28 percent and 25 percent, respectively, versus ABC's in-game coverage of the 2014 Final (17.3 million viewers and a 9.1 household rating).

When streaming deliveries were blended into Fox's linear TV numbers, Sunday's Final averaged a grand total of 11.8 million viewers. Fox on Tuesday said its live-match coverage served up an average-minute audience of 552,000 viewers on its various streaming platforms.

While Fox's World Cup reach was undoubtedly impacted by a not-insignificant time zone lag—with Moscow situated a full seven hours ahead of New York, this marked the first Final to kick off before noon EDT since 2002—the network didn't face much in the way of competition from other televised sporting events. ABC's coverage of the men's singles championship from Wimbledon averaged fewer than 1.1 million viewers and a 0.7 household rating opposite the World Cup Final, while NBCSN's Tour de France coverage drew just 423,000 viewers in the Sunday morning window.

That the starting time contributed to Fox's ratings drop is generally supported by Nielsen data from earlier World Cup Final broadcasts. For example, including pre-game coverage, ABC's presentation of the 1994 Italy-Brazil tilt, which kicked off at 3:30 p.m. EDT, averaged 14.5 million viewers and a 9.5 household rating. Meanwhile, the 2002 Germany-Brazil Final, which began at an unconscionably early hour (7 a.m. EDT), drew a paltry 3.93 million viewers and a 2.5 rating.

Of course, as is the case with all ratings analysis, a number of other factors likely had a say in the ratings for the aforementioned Finals. The Italy-Brazil match, for instance, was played in the Rose Bowl, which almost certainly helped boost ABC's deliveries; also playing a significant part was the tenor of the match itself, which Brazil won in extra time by netting 3 penalty kicks to Italy's 2. Then again, other than the early starting time, the awful ratings for the 2002 Final are more difficult to explain away. In what was an evenly-matched contest, Brazil's Ronaldo broke through to score the game's first goal in the 67th minute, before adding a second some 12 minutes later.

If the TV turnout for the World Cup Final won't earn the match a spot among the year's top 50 rated broadcasts, the official deliveries shouldn't be seen as a colossal let-down. For a sport that is still finding its footing in the U.S., those 11.3 million viewers represented a decent draw for the capper of a tournament that did not include the home team; moreover, Fox's deliveries more than doubled the 6.59 million viewers who tuned in for NBC's broadcast of the deciding sixth game of this year's Stanley Cup Final.

According to Standard Media Index estimates, the 2014 FIFA World Cup generated $319 million in total ad sales revenue across ABC/ESPN and Univision, with in-game sales adding up to some $296 million. By category, the biggest spenders in that year's tournament were auto ($43.5 million), telecom ($29.9 million) and beverages/soft drinks ($25.3 million). SMI will present its final estimates for the 2018 tournament next month.