No Sales Pitch Is Too Dirty for This Cabler

Road to the Upfront: Discovery Networks
READ THIS NEXT
How Amazon Prime Video CMO Ukonwa Ojo is positioning the brand in the streaming wars

The Player: Discovery Networks
The Date: April 23, 2008
The Venue: Jazz at Lincoln Center, New York
Key Execs: David Zaslav, president-CEO, Discovery Communications; Joe Abruzzese, president-ad sales, Discovery Communications; John Ford, president-general manager, Discovery Channel; Angela Shapiro-Mathes, president-TLC; Patrick Younge, president-general manager, Travel Channel; Marjorie Kaplan, president-general manager, Animal Planet Media; Eileen O'Neill, president and general manager, Planet Green.
The Celebs: Virtually every Discovery Network star imaginable showed up at some point (the captains of "Deadliest Catch," the brood from "John and Kate Plus Eight," Dave Salmoni, Animal Planet's resident "large predator expert," Mike Rowe of "Dirty Jobs," etc.), and a handful of actual celebs, too. Oprah Winfrey appeared via prerecorded video to discuss her vision for the Oprah Winfrey Network, slated for launch next year. And TLC rolled out an arsenal of stars, most notably Jennifer Lopez, who is currently in production on a reality series about her life as a mother of twins.
The Food: Each network had its own branded booth with accompanying food and cocktails. The best? A fresh haul of crab legs, lobster and sushi at the Discovery Channel booth, in honor of "Deadliest Catch."
The Drinks: Again, each network had signature cocktails. Our faves? TLC's "Tasty Little Cocktail" (basically a cosmo) and Planet Green's Acai-tini, named after the rare, tasty purple-hued fruit.
The Swag: None, but there was more than enough food, drink and photo opportunities to justify the lack of a goodie bag.

Twelve months later, Mr. Zaslav & Co. are delivering on that initial promise. For starters, the branding has been top priority for virtually all the Discovery networks, each one overhauling both its programming and overall brand statement. Even Discovery Channel, the company's flagship network, is not immune to these changes, as the network updated its logo and tagline for the first time in two decades, courtesy of a rebranding effort co-created with 72andSunny. The channel's signature globe has been tweaked ever so slightly, and its new slogan, "The World Is Just Awesome," even has its own theme song, a take on the children's song "I Love the Mountains" that makes inventive use of the infectious "boom-de-ah-dah" chorus.

The channel's president, Mr. Ford, said the idea was to "take a very strong brand and give it one-eighth of a turn in a contemporary direction with a fun spot. Something that really says come on and play with us. Discovery is a fun, optimistic place and we want viewers to come enjoy it. Our programs now have to be consistent with that overall brand promise."

Speaking of brand promises, two new networks in the Discovery family will be hoping to make a dent in the next year. First is Planet Green, the first dedicated 24/7 cable network for green programming, which unveiled a slew of reality and celeb-themed new series with producers and hosts such as Leonardo DiCaprio, Adrian Grenier and Emeril Lagasse. Although conservation and green lifestyles will be common themes explored throughout the shows, the overall tone of the network seems to be a bit more glamorous. Case in point: "Access Hollywood" is partnering with Planet Green for a weekly green news series, "Hollywood Green," to premiere shortly after the network's launch June 4 in 50 million homes. 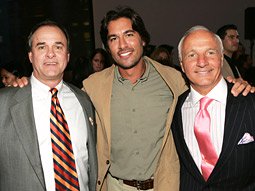 John Ford, president and general manager, Discovery Channel; Josh Bernstein, host of 'Expeditions with Josh Bernstein' and Joe Abrusseze, president-ad sales, Discovery Communications
Also in the "green" stages, meaning early, is the Oprah Winfrey Network, which will launch next spring in place of Discovery Health in 80 million homes. Ms. Winfrey, in a pre-recorded video statement, used typical "Oprah-isms" to describe what the end result might look like. "The goal for OWN is to help the viewer realize their deepest, truest self. We want to engage viewers and be able to shine a light on how people can be more themselves." The network is currently seeking a CEO to run the network and ultimately greenlight its first round of programming into production. That post is expected to be filled by this summer, and has been rumored to be offered to former MTV President Christina Norman.

Enhancing the Discovery ad buy this year are two ambitious ad-sales initiatives that will broaden integration opportunities for advertisers on-air and online. A newly formed in-house creative services group, Discovery Studios, will allow marketers to essentially outsource the production of their ads to the company, with the option of using Discovery talent, and at a fraction of the cost.

Another big undertaking, the newly integrated HowStuffWorks.com platform, will bring behavioral targeting and search engine-optimization into ad buys. HowStuffWorks CEO Jeff Arnold gave a live demo of the site alongside Mr. Abruzzese, demonstrating the potential for major marketers to own entire categories of information online. More than 200 million auto-related searches were made last month, a 66% increase over the same time period in 2007, Mr. Arnold said. And HowStuffWorks is often one of the top three search results on Google for keywords like "car financing," "hybrid cars" and "car engines."

"Once someone realizes they want to buy a car, they're going to go to search engines," he said.

The Digital Play: Since formally becoming a part of the Discovery family in December, the combined HowStuffWorks.com/Discovery.com supersite has gone from 10 million unique visitors in December to 15 million uniques last month. The plan for 2008 is to sell the two as a way to package contextual online search buys for clients to effectively own a category of information on the site, like hybrid cars or car engines.