Among the subject lines of the various email alerts I got from Us Weekly over the past 24 hours: "'Teen Mom 2' Recap: Kailyn Lowry Talks About Third Pregnancy," "Amanda Stanton and Robby Hayes Are Still Dating Despite Split Rumor" and "Anthony Scaramucci Out as White House Communications Director." Makes total sense, because Scaramucci basically was a reality TV character, so why shouldn't Us Weekly treat him like any other marginal celebrity? Anyway, let's get started ...

1. Who wore it best? Morning-after tabloid newspaper coverage of the latest drama from the tabloid-optimized White House: 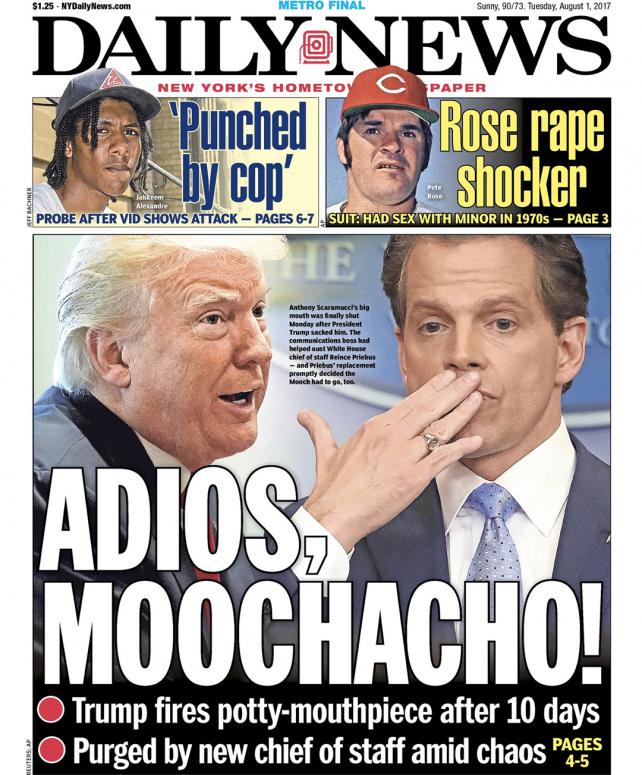 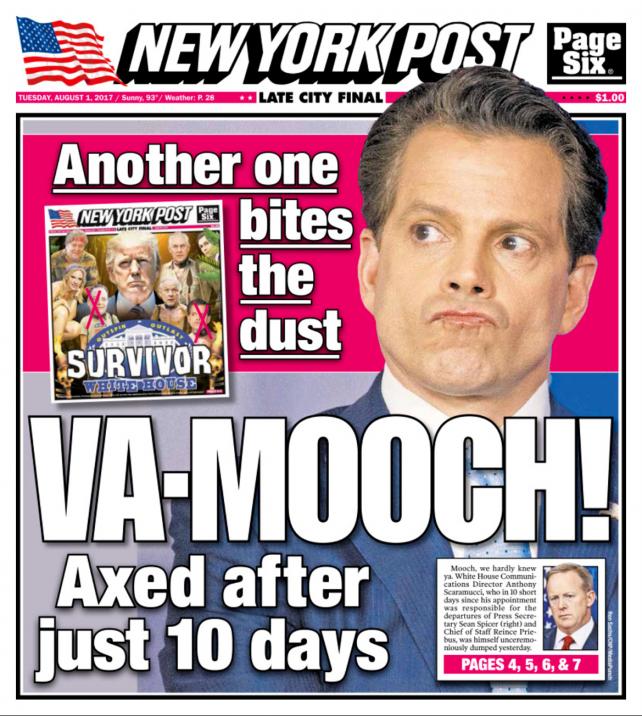 + "How to plug an awkward gap in your CV -- and other career advice for the Mooch," via The Guardian.

+ At least one cartoonist is mourning the loss of the Mooch:

2. Anything other than "Lord of the Flies, White House Edition" going on? Oh, yeah. Obamacare repeal -- still not going so well. Per The Hill, this morning: "Senate Republicans brush off Trump's healthcare demands."

3. I hereby assert that "probabilistic assertions of truth" is probably my favorite phrase of the day. Per Kurt Wagner at Recode:

Facebook has acquired Ozlo, a Palo Alto-based artificial intelligence startup, to help Messenger build out a more elaborate virtual assistant for users. Ozlo specializes in understanding text-based conversations, and claims it can understand and provide answers to questions that don't necessarily have simple yes or no answers -- what Ozlo calls "probabilistic assertions of truth." On the company's website, for example, a short demo shows its AI assistant answering a question about whether or not a restaurant is "group friendly" based on pulling and understanding multiple reviews.

4. The spin about the spin continues to spin out of control: The second biggest story on the front page of The Washington Post this morning (after "Kelly becomes chief of staff; Scaramucci fired') is headlined "Trump crafted son's statement on Russian contact" -- tweaked a bit for the web to "Trump dictated son's misleading statement on meeting with Russian lawyer." The piece, team-reported by Ashley Parker, Carol D. Leonnig, Philip Rucker and Tom Hamburger, begins,

On the sidelines of the Group of 20 summit in Germany last month, President Trump's advisers discussed how to respond to a new revelation that Trump's oldest son had met with a Russian lawyer during the 2016 campaign -- a disclosure the advisers knew carried political and potentially legal peril. The strategy, the advisers agreed, should be for Donald Trump Jr. to release a statement to get ahead of the story. They wanted to be truthful, so their account couldn't be repudiated later if the full details emerged. But within hours, at the president's direction, the plan changed.

5. Because of course: "Read a Bunch of Trump Administration Dummies Argue With an Email Troll They Thought Was Their Coworkers," via Gizmodo.

6. "Katie Couric turned down multimillion-dollar offer from Yahoo," according to Page Six.

+ ICYMI: "As Couric Leaves Yahoo, Was Donald Trump Right To Call Her 'Largely Forgotten'?," per Forbes contributor Mark Joyella, who writes about Couric disappearing into "the world's most lucrative witness relocation program: taking a position as 'global news anchor' for Yahoo! News. ... Couric was the public face of Yahoo! News, but not an easy face to find -- even if you were determined to roll up your sleeves, pour a cup of coffee, and spend an hour or two searching Yahoo's vortex of content for Couric's work."

Thanks to Jeanine Poggi, George Slefo and Chen Wu for their roundup suggestions.