Katzenberg Says Mobile Video Viewers Will Pay by the 'Inch' 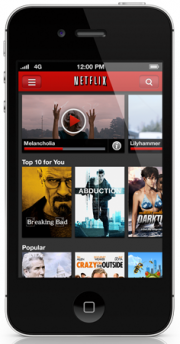 Netflix for the iPhone

People will pay less to watch movies and television shows on a mobile phone than to see it in a theater, Mr. Katzenberg said today at the Founders Forum conference on digital media in Los Angeles. The move would create higher consumption in developing markets, such as India, where cell phones are widely used for entertainment, he said.

"People will pay by the square inch," Mr. Katzenberg said. "If a cell phone version is 75 cents, you'll get 350 million people in India to pay that."

Studios are looking for ways to increase home-video sales in international markets. Foreign sales of movie tickets already outstrips revenue in the U.S. and Canada by a two-to-one margin. International sales in 2011 were $22.4 billion, compared to $10.2 billion in the U.S., according to the Motion Picture Association of America.

Hollywood also wants to make the most of digital delivery without undermining its existing business. Netflix recently won the right to offer movies from DreamWorks Animation SKG -- the studio behind films such as "Shrek," "Madagascar" and the forthcoming caveman movie "The Croods" -- in a deal replacing a DreamWorks pact with HBO. The pact will include new releases starting in 2013.