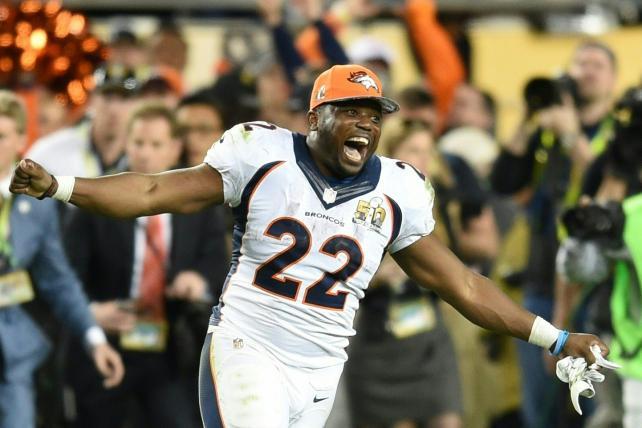 C. J. Anderson of the Denver Broncos celebrates after Super Bowl 50 at Levi's Stadium on Feb. 7. The NFL can celebrate too.
Credit: Timothy A. Clary/AFP/Getty Images

While much has been made of the NFL's seasonal ratings declines, the Shield's hegemonic stranglehold on American TV consumption shows little sign of abating. In a year marked by two audience-friendly quadrennial events and a once-in-a-lifetime World Series showdown, NFL games still accounted for more than half of the year's top 50 most-watched broadcasts, leaving little doubt that football's outsized influence over the culture remains formidable.

That means the same goes for its hold on advertisers. Scripted TV programming, which was shut out of the 2016 top 50, can hardly say the same.

According to Nielsen live-plus-same-day data, NFL games laid claim to 27 of 2016's most-watched TV broadcasts, and while that total was down from the 37 top airings that pro football notched in the year-ago period, the league in 2015 didn't have to contend with the Summer Olympics. NBC's coverage of the Rio Games ate up 11 of the top TV slots, peaking with night four's 33.4 million viewers, which stands as the year's 16th most popular broadcast. Not surprisingly, NBC's ratings were highest when U.S. athletes like Michael Phelps, Katie Ledecky and Simone Biles were putting together their respective gold-medal performances; as has been the case throughout the last several Olympiads, swimming and gymnastics tend to draw the biggest crowds.

In a major reversal, the World Series made its presence known on this year's list, as the last three games of the Cubs-Indians intrigue put up monster ratings. In becoming just the sixth team in MLB history to rally from a three-games-to-one deficit, Chicago brought the curtain down on 108 years of futility while helping Fox draw NFL Playoff-quality numbers. Game 7 of the Fall Classic averaged a staggering 40 million viewers, making it the most-watched baseball game in 25 years; in stark contrast, not a single broadcast from the five-game 2015 World Series came within striking distance of the 20 million mark -- or last year's top 50.

If it was the Indians' destiny to extend their 68-year title drought by at least one more season, Cleveland's favorite son LeBron James and the Cavs held up their end of the bargain in June, stunning Golden State with an epic comeback run that culminated in the city's first ticker tape parade since the '64 Browns won the NFL Championship. Game 7 of the Cavs-Warriors series drew 31 million viewers, making it the most-watched basketball game since 1998.

While the year in sports was punctuated by moments that would have been deemed the work of a hack if they'd been scripted -- both best-of-seven championship series featured squandered leads that were, for all practical purposes, insurmountable (until they weren't) and the vanquishment of two seemingly unshakeable "curses" -- perhaps the most implausible drama was generated in the political realm. In terms of overall deliveries, the three fractious debates between Donald Trump and Hillary Clinton blew everything but Super Bowl 50 out of the water, and while the multi-network broadcast arrangements and lack of commercial breaks present an apples-to-hand-grenades comparison with the rest of the events on the list, the sheer volume of people who tuned in for each skirmish made the results impossible to ignore.

Categorical hairsplitting aside, live viewership is one common thread that runs through each of the items on the list. The second is that not a single episode of scripted TV found its way into the top 50.

The lack of a scripted show among TV's biggest draws is not unprecedented, but dramas and comedies are also losing ground fast. In 2015, just 1 million viewers separated TV's most-watched scripted effort (as it happens, another episode of "NCIS") from the top 50, while the previous year saw no fewer than three scripted episodes make the list, an assembly that included the installment of "New Girl" that Fox aired immediately after Super Bowl XLVIII.

All told, NBC had bragging rights to the most events in the top 50, with 11 Olympics broadcasts and five NFL games giving it the edge over rivals Fox (14) and CBS (10). ABC, which does not enjoy the luxury of hosting a regular slate of NFL games, popped up three times thanks to the Oscars, the deciding game of the NBA Finals and its simulcast of an AFC Wild Card contest that originated on sibling cable net ESPN.