Publishers are heading into summer optimistic about a housing recovery that's restoring confidence -- and spending -- to advertisers in the home category.

Last week, Standard & Poor's Case-Shiller home-price index posted its biggest gains in seven years. Other indicators, such as building permits and new and existing home sales, are also showing promise. "The boost in spending from the house category has been new," said Lucy Schmidt, print director at media-buying agency Empower MediaMarketing. "That's a direct reflection of the housing market."

Ad pages in the national shelter-magazine category climbed 7.2% in the second quarter, buoyed by an 8.7% increase in June issues over the year prior, driving year-to-date growth of 6%, according to the Media Industry Newsletter. Monthly magazines overall saw ad pages drop 0.9% in the second quarter, following a flat first quarter, MIN's data show.

Companies selling paint, appliances, furniture, kitchen and construction supplies, as well as retailers that stock these items, have increased their spending in shelter magazines, according to publishers and media buyers. 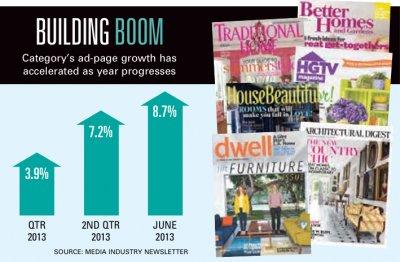 "When the housing industry has an uptick, we can feel it," said Kate Kelly Smith, senior VP-group publishing director of Hearst Design Group, which includes House Beautiful, Veranda and Elle Décor, the latter two also having recorded increases in ad pages this year.

Hearst's HGTV magazine, which published its first issue in June/July last year, ran 91.28 ad pages in its June issue this year, a 76.6% increase. Some of that growth is a new magazine expanding from a relatively small base, but Empower's Ms. Schmidt said it also reflects a trend in home advertising toward do-it-yourself projects.

Architectural Digest ran 210.73 ad pages in the first quarter of this year, a 15.6% drop from the prior year. But the Condé Nast title recovered much of that ground after with a 7% increase in the second quarter, thanks to a 43.6% surge in pages in June, according to MIN. Publisher Giulio Capua, who attributed the first-quarter drop to the previous year's special January issue, anticipates a fourth straight year of ad growth. "Client business across the housing sector is growing," Mr. Capua said.

The giant in the category, Meredith's Better Homes and Gardens, is struggling, with ad pages down 11.2% in June and 12.8% on the year. And sibling Traditional Home, which saw the category's largest ad-page bump last year, is down 8.8% year to date.

While ad pages at Dwell are down 4.5% this year, according to MIN, Dwell President Michela O'Connor Abrams said the magazine's July/August issue will be its biggest since October 2008.

Like nearly all shelter titles, Dwell weathered the downturn by finding non-endemic advertisers, such as auto, luxury and liquor marketers. Publishers are also embracing new revenue from trade shows and housing expos and by working with brands on experiential opportunities. Architectural Digest, for example, consulted with Delta Airlines on its sky lounge at JFK Airport. "Clients are really relying on us to be brand consultants," Mr. Capua said.