Around 1 p.m., right after I wake up and right before I break for a restorative nap, I like to reacquaint myself with the big, bright world outside my window. Since venturing outside demands both exertion and the onerous interweaving of shoelaces, I usually get my fix courtesy of the local midday newscast, during which the C-team anchors read the previous night's reports verbatim and hope nobody notices. 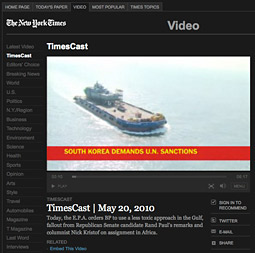 This used to be enough. It isn't anymore. Internet, whatcha got for me?

As it turns out, not much. While cable news networks and local-station sites offer a glut of re-purposed video, none spoon-feed big-picture headlines to visitors in a manner that appeals to the time-pressed or chronically lazy. Web crawlers who want something that approximates the rhythms of the first 10 minutes of a traditional newscast have to assemble their own content Frankenstein from a mess of disparate clips.

Of all the online publishers that might have stepped up to fill that void, I would have ranked The New York Times as among the most unlikely. While the paper's single-subject videos are professionally produced and happily quirky, the Times hasn't exactly earned its broadcast bona fides. Talky dispatches from international correspondents or trivia-rich New York City Marathon course walk-throughs? Definitely. The news, pithily presented for an audience informed enough to seek out the Times in the first place? Not so much.

The Times bowed its "TimesCast" daily midday news recap a few months back. Despite primo positioning on the paper's website -- that'd be center stage, unmissable unless you're blindfolded -- the videocasts haven't gained much traction, and with good reason: They're dull.

"TimesCast," which goes live at 1 p.m. ET, canvases the day's need-to-know stories in a tidy five to six minutes. Each edition covers four stories: usually two with an international bent (such as reports on the insurrection in Thailand and chaos in Kabul), one rooted in politics (Rand Paul, take your victory lap) and one that exults in the glory of lifestyle piffle (such as last Friday's Preakness preview).

Ironically enough, despite the Times' army of committed journalists, the latter segments come off best. That's because the writers interviewed for them, such as ubiquitous media guy Brian Stelter, have some idea of how to present themselves for the camera. Compare this with the hard-core overseas news gatherers, whose pained facial expressions and half-stutters practically beg, "Can I please go back to my war zone now? Please?" Or compare it with the conversations between editor and reporter in the Times newsroom, which feel as casual and spontaneous as an infomercial.

Tonally, if you think the 6:30 p.m. national newscasts are too sexy and histrionic, "TimesCast" is for you. That's probably why the producers attempt to jazz things up texturally, populating the between-story segues with a hepcat drum soundtrack, panoramic shots of the cubiclicious Times offices and sped-up footage of reporters in blue shirts wandering around aimlessly.

Along those lines, each "TimesCast" treats us to footage from the Times' Page One Meeting -- which, according to the "Law & Order"-ish timestamp, takes place every morning at either 10:32 or 10:33 a.m. Note to producers of everything everywhere: Stop including footage of this ilk in your docu-news thingamabobs. Nobody cares about journalists going about their daily business, soberly discussing why they make the decisions they do. We are not interesting. In "TimesCast," these segments enthrall only when they afford a glimpse of the paper's epic conference-room table and two-tiered seating, which looks like something out of a movie that tried but failed to get clearance to shoot at the United Nations.

My point: Be smart and authoritative, or don't. If we want overly stylized intellectual pretension, we can always flip over to PBS or NPR.

The only way "TimesCast" can be salvaged, I think, is by structuring it more rigidly. Regularly scheduled features would go a long way towards making it a destination rather than a curiosity. Ape the paper itself: On Monday, get David Carr to yap about media. On Friday, let A.O. Scott pop off about film. With such features as a backbone, the videocasts shouldn't feel quite so weightless.

For now, though, "TimesCast" is bland and broad instead of thoughtful and involved. As a result, it comes across less as an opportunity missed than as one that should've been rejected in the first place. As much as anything that the Times has done, online or off, "TimesCast" is a non-starter.