What you need to know about the Serena Williams U.S. Open media firestorm | Ad Age
Skip to main content

What you need to know about the Serena Williams U.S. Open media firestorm 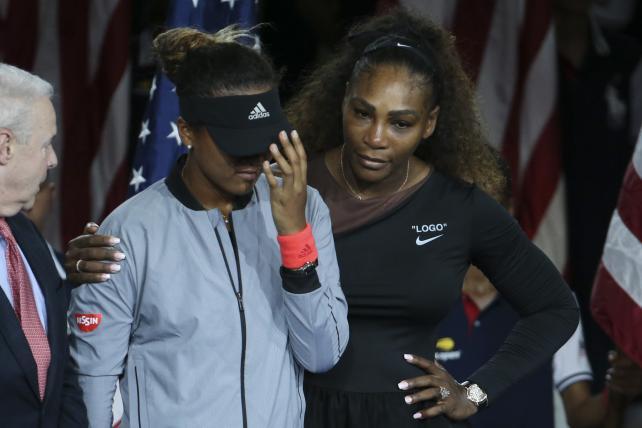 So what just happened?

Over the weekend a narrative and a counternarrative emerged surrounding Serena Williams' tangle with an umpire at the U.S. Open. The umpire presiding over Williams' match against Naomi Osaka made controversial calls that left Williams rather unhappy—and gave some of the more sensationalistic precincts of the media world the opportunity to take her anger out of context. See, for instance, TMZ's "SERENA WILLIAMS BLOWS UP ON REF OVER VIOLATION: 'You Owe Me an Apology!'"

If you want to see the extended conflict for yourself, ESPN distilled it into this Twitter video:

Serena Williams was fined $17,000 on Sunday for a total of three code violations during her loss to Naomi Osaka in the U.S. Open final—$4,000 for being warned for coaching after her coach made a hand gesture to her, $3,000 for breaking her racket and $10,000 for "verbal abuse" of chair umpire Carlos Ramos, whom she accused of sexism. The U.S. Tennis Association confirmed to ABC News on Sunday that $17,000 will be deducted from Serena Williams' $1.85 million check as the runner-up to Naomi Osaka, who became the the first tennis player from Japan to win a Grand Slam singles title on Saturday.

The "verbal abuse," per the U.S. Tennis Association, included Williams calling Ramos a "thief" ("You stole a point from me").

Three code violations—that's quite a pile-on. Were these penalties justified?

The consensus among tennis-world pros is ... no. The legendary Billie Jean King, for instance, tweeted:

Andy Roddick also took to Twitter to chime in (responding to a tennis fan's tweet about about Williams' "thief" insult to the umpire):

What's the consensus from sports journalists?

Basically that the umpire had it out for Williams. Per Richard Deitsch, a Sports Illustrated staffer for 21 years who now writes for The Athletic:

And this is from ESPN's Mike Greenberg:

So what happens now?

The conversation—weighted by the specter of both sexism and racism—continues. See, for instance, "Herald Sun Cartoonist Defends Racist, Sexist Serena Williams Cartoon" (HuffPost).

Final note: If you read one in-depth take about all this, make it "Serena Williams and the Game That Can't Be Won (Yet)"—subhead: "What Rage Costs a Woman"—by Rebecca Traister of New York Magazine/The Cut. Traister writes, in part,

[D]uring a naturally supercharged Grand Slam final between veteran superstar and the young woman trying to unseat her, a male umpire prodded Serena Williams to anger and then punished her for expressing it. ... She was punished for showing emotion, for defiance, for being the player she has always been—driven, passionate, proud, and fully human. ... Women are made to understand, all the time, how their reasonable expression of vexation might cost them the game. Women's challenge to male authority, and especially black women's challenge to authority, is automatically understood as a threat, a form of defiance that must be quashed.