"Shark Week" was conceived in a hotel suite. Cable was in its infancy and Discovery Channel, just 2 years old in 1987, was looking for a way to attract viewers. It was a decade after Steven Spielberg's "Jaws," and America was still fascinated by the mysterious animal: The network saw a bump in ratings every time shark-related programming aired.

Steve Cheskin, an exec at Discovery at the time, blurted out "shark week" at what has been described as an afterwork brainstorming session. As he recalled, Discovery founder John Hendricks smiled and said, "That's it." 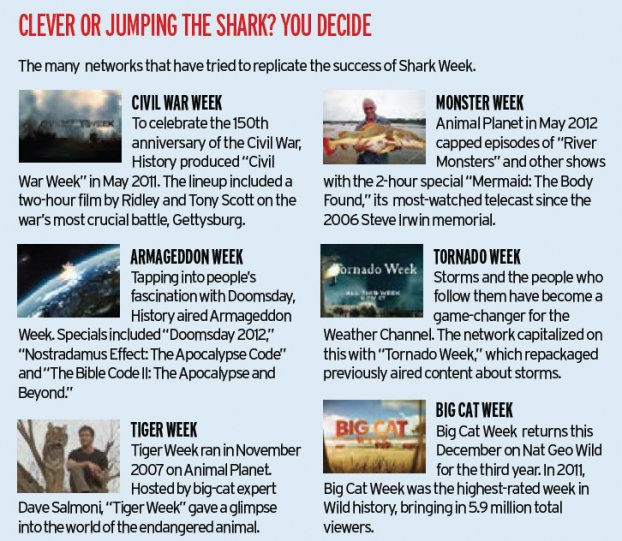 Click to view: Clever or Jumping the Shark? You Decide

Twenty-five years later, "Shark Week" has become cable's longest-running promotion and has spurred comedic parodies, every type of knick-knack and even drinking games. While other networks have tried to replicate its success with events like "Big Cat Week" and "Tornado Week," none have been able to build the same buzz and rabid fans.

It's hard to put a finger on why exactly sharks capture people's fascination, but it seems they inspire the right mix of awe and fear. 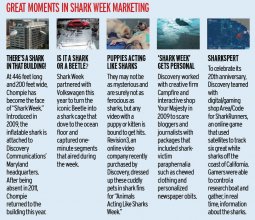 "It goes back to 'Jaws' and the imprint it made on our culture," said marketing expert Adam Hanft. "The shark is a cultural metaphor for our fears and anxiety and our fascination with the unexpected danger lurking below the surface of the beauty and calm of the ocean."

Discovery's execs couldn't have known what "Shark Week" would become when the first of its programming, "Caged in Fear," aired July 17, 1988. But they soon found out. In its first year, "Shark Week" nearly doubled Discovery Channel's normal prime-time average.

Discovery has aired 151 shark-themed programs during "Shark Week's" 25-year run. That's a lot of sharks -- and the network churns out new original programming every year.

The science of sharks is constantly evolving, giving Discovery new material every year. "Sharks are still not as understood as other animals like lions and chimpanzees," said Eileen O'Neill, group president of Discovery and TLC Networks. 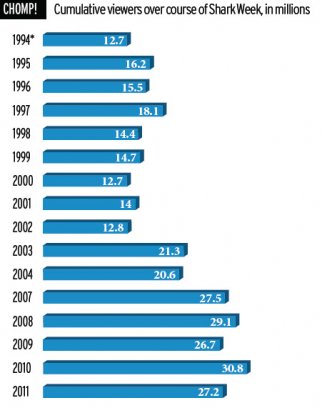 "Shark Week" also has timing on its side. "There's not a whole lot on at the end of July and August when "Shark Week' normally airs," said Scott Felenstein, senior VP-ad sales, at Discovery Channel.

In fact, "Shark Week" was pushed back two weeks this year not to overlap with the Olympics -- indicating sharks aren't afraid of anything but Michael Phelps.

While the sharks have always been the central focus, Discovery began including celebrity hosts in 1994, the first being "Jaws" author Peter Benchley. Since then, supermodel Heidi Klum, talk-show host Craig Ferguson and comedian Andy Samberg have all become fin fanatics.

"Shark Week" draws a younger audience for Discovery Channel than its normal programming, making it especially attractive to advertisers. "Shark Week's" sweet spot is a viewer 31 years old, Mr. Felenstein said -- about eight years younger than its other shows.

"For Discovery, it's the Super Bowl," he said.