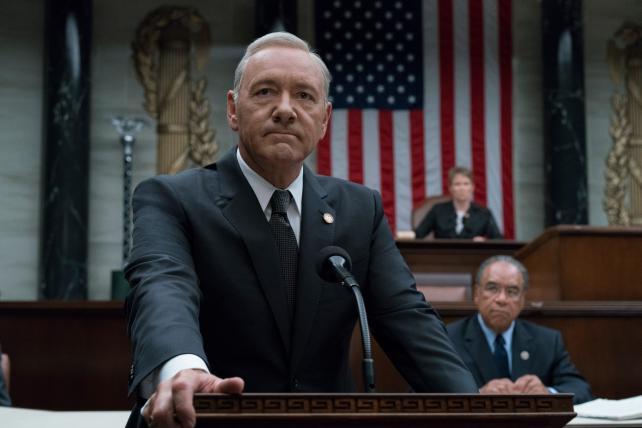 Netflix has suspended production of "House of Cards" following a sexual harassment allegation against star Kevin Spacey, putting the future of the company's defining show in jeopardy.

Production of the sixth and final season of the political drama was just getting underway in Baltimore, though Spacey had yet to arrive. Spacey, 58, who stars as venal politician Frank Underwood, was accused of making sexual advances toward a 14-year-old boy more than 30 years ago.

Netflix and Media Rights Capital, the studio that makes and owns the series, must decide whether to proceed given the allegations against Spacey, an Oscar-winning actor who helped put Netflix on the map as a home of high-end TV. The show was Netflix's first hit original series, earning critical praise, winning awards and convincing millions of people to sign up for the streaming service.

Executives from Netflix and Media Rights Capital traveled to Baltimore Monday to meet with the cast and crew.

"MRC and Netflix have decided to suspend production on 'House of Cards' season six, until further notice, to give us time to review the current situation and to address any concerns of our cast and crew," the companies said in a statement Tuesday.

The allegations against Spacey have pulled Netflix into the mushrooming controversy over sexual harassment in Hollywood, which has already felled film producers, agents, actors and filmmakers in the past couple weeks. Weinstein Co. fired co-founder Harvey Weinstein for his alleged sexual predation while Amazon.com Inc. sacked the head of its TV and film studio.

Anthony Rapp, a star of the CBS online series "Star Trek: Discovery," told BuzzFeed he was accosted at age 14 by Spacey at a party in 1986. In a Twitter posting Sunday, the Oscar-winning Spacey apologized for behavior he said he doesn't remember.