Variety is out this morning with its annual TV talent salary survey and it's really good news for the 86 drama, comedy, reality and news stars on the list. 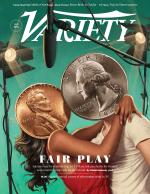 Some of the dollar signs attached to names won't be a surprise, as they've been reported elsewhere; e.g., Stephen Colbert and Jimmy Kimmel are each paid an estimated $15 million per year to host their respective late night talk shows, while Jimmy Fallon edges them both out with a $16 million paycheck. But it turns out the really big money (at last for effort expended) is going to a late-night retiree. Per Variety:

How badly did Netflix want David Letterman on its platform? Enough to pay him an estimated $2 million per episode for a six-episode commitment for an in-depth interview series. That number has sent jaws dropping throughout the unscripted TV community.

Another jaw-dropper: the $775,000 per episode that Variety says Robert De Niro is set to get for an untitled Amazon drama series from David O. Russell.

The bottom line: Streaming outliers aside, right now traditional TV salaries, according to Variety, are topping out at $525,000 per drama episode -- for Mark Harmon of "NCIS" -- and $900,000 per sitcom episode for the five leads of "The Big Bang Theory," including Jim Parsons. Those, of course, are both CBS shows. The next best-paid ensemble comedy team is over at ABC, where the stars of "Moodern Family," including Sofia Vergara, each pull down an estimated half mil per episode.

Read on for more numbers on the full list -- including what "Mad Men" veteran Elizabeth Moss makes per episode of Hulu's "The Handmaid's Tale."

The takeaway: Why are these numbers so breathtakingly high even as traditional TV faces ever-shrinking audiences? One explanation: "The new business models that govern streaming services have ... had the effect of raising upfront payments to top talent because traditional forms of generating a profit from a hit series -- through international sales and off-network syndication -- are no longer an option," per Variety's Cynthia Littleton.