Spielberg Teams Up With Alibaba's Ma to Bring Hollywood to China 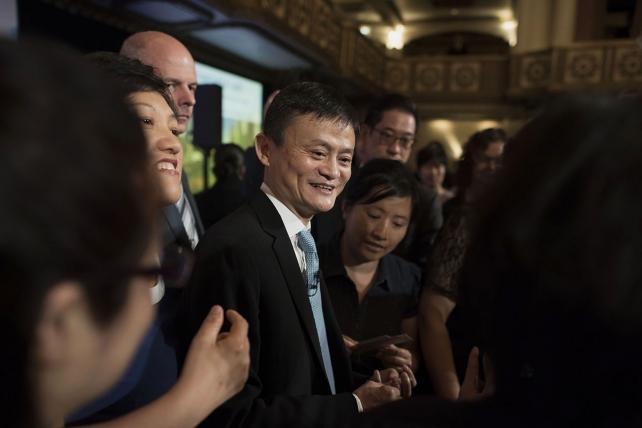 It's a casting director's dream. Jack Ma, China's richest man, and the highest-grossing Hollywood auteur of all time have struck a deal to work together to produce and finance films for the world's second-largest movie market.

Alibaba Pictures Group is buying a stake in Amblin Partners, the production outfit backed by Steven Spielberg to work together on production, marketing and distribution both globally and in China. It's the latest in a spree of deals over the past two years intended to help U.S. studios tap what could soon be the world's largest box office, while hopefully imparting a little of that Hollywood movie-making magic to increasingly ambitious Chinese households.

The agreement with Mr. Spielberg's storied studio marks Alibaba's and Mr. Ma's most comprehensive production effort to date. The company has been selective so far, preferring to invest in select films such as the latest installment of the "Mission Impossible" franchise, in return for an equity stake and the right to stream it across internet giant Alibaba Group Holding's various online services.

"Among Chinese consumers, there is an increasing demand for premium global content," Mr. Ma said in an e-mailed statement. "This collaboration can serve as a cultural bridge and have a positive impact on the next generation of Chinese consumers."

"We intend to make six to nine movies a year," Amblin Partners President and Co-Chief Executive Officer Jeff Small said Sunday at a launch of the tie-up in a downtown Beijing skyscraper's ballroom. The films would be distributed by a network that included Universal Pictures. China had the "fastest-growing demand in world."

Mr. Ma and Mr. Spielberg appeared together at the launch.

"There's a lot in China that's becoming more and more known, through media ... and China's tremendous renaissance," said Mr. Spielberg, who was part of a crew that shot the movie "Empire of the Sun" in Shanghai in the 1980s. He said he wants to "bring more of China to America and more of America to China."

Mr. Ma told the launch he's not personally trying to envision movies of the future, but "my job is using technology to support these guys."

China has been a focus for Hollywood studios in recent years as the U.S. film market has stagnated. In 2015, China's box office totaled $6.8 billion, up 49% from the previous year, according to consulting firm Artisan Gateway. The North American box office had its biggest year in 2015 at $11.1 billion, according to the Motion Picture Association of America.

American studios have been looking to Chinese partners for funding and ways to maximize their revenue from a country that limits the number of foreign firms exhibited annually at 34. That aligns with the ambitions of a coterie of local media houses that are in turn trying to hone an ability to reach worldwide audiences, and hasn't been shy about paying for it.

Fellow Chinese billionaire Wang Jianlin's Dalian Wanda Group has been among the most aggressive in its overtures. It bought "Jurassic World" co-producer Legendary Entertainment and has agreed to co-finance and market releases in China for studios including Sony Pictures. Wanda, now said to be eyeing Golden Globes show-runner Dick Clark Productions, also runs the world's biggest chain of movie theaters after buying AMC Entertainment. Other Chinese players investing in studios include Fosun Group and Huayi Brothers.

But the rapid pace of acquisitions has some in Washington spooked. Lawmakers have called for an overhaul of regulations to give the U.S. greater ability to scrutinize and block Chinese investment in U.S. media, as well as force lobbyists acting for the Chinese to register their interests.

In December, Mr. Spielberg brought new life to his production company DreamWorks Studios, renaming it Amblin Partners. The director of "E.T.," the biggest-grossing director in history, raised $800 million in debt and equity from banks and partners Reliance Group, Participant Media and Entertainment One. As part of the deal, Amblin's films will be distributed by Comcast's Universal Pictures rather than Walt Disney.

Mr. Spielberg's been honored with more than a dozen best-director and best-picture Academy Award nominations, winning for "Schindler's List" and "Saving Private Ryan." But his latest effort, "The BFG," failed to recoup its costs at the box office. In the U.S., Universal Pictures just released the first movie from its pact with Amblin, "The Girl on the Train," based on the best-selling mystery novel.