SpinMedia Revives Vibe as Quarterly, Considers the Same for Spin

Quarterly Theme Issues Will be Less Topical But More In-depth and Evergreen
READ THIS NEXT
TikTok and Snapchat battle for Gen Z, as Instagram trails with kids

Vibe magazine is celebrating its 20th birthday by announcing it plans to live to see 21. 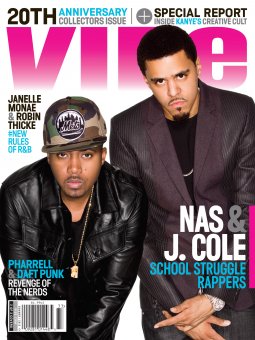 One of three covers for Vibe's new print edition, which once seemed like it wouldn't continue

Despite numerous reports this year that the magazine's new owner SpinMedia, the network of pop-culture blogs, had decided to shut down the print edition, executives now say they will keep printing the magazine on a regular basis. Frequency will be reduced to four times a year from six.

"I have absolutely not made the decision to shut down print at Vibe," said Steve Hansen, CEO at SpinMedia. "We'll continue the print side of the business as long as it makes economic sense and if you look at this issue, it makes sense for us."

Vibe's quarterly print cycle begins with its 20th anniversary issue, on newsstands Tuesday at a cover price of $4.99. The issue -- which will contain ads from marketers including Bacardi, Colgate Palmolive, McDonald's and Nissan -- is also being mailed to the magazine's approximately 200,000 existing subscribers.

SpinMedia says Vibe is taking new print and digital subscribers at $9.99 a year, although there was no Vibe.com page Tuesday where consumers could sign up with names, addresses and credit card information. A new web portal for new subscribers will arrive in coming weeks, according to the company.

Earlier this year it didn't seem like Vibe would regularly see print again at all. When SpinMedia bought Vibe in April, The New York Times reported that the company "planned to shut down Vibe's print magazine later this year."

"We are still trying to find a print model that makes economic sense in the digital age," The Times quoted Mr. Hansen saying.

Mr. Hansen now says his plan to keep Vibe on newsstands stemmed from the company's experience with Spin, a previous music magazine it acquired and ushered from print. (The company, formerly called BuzzMedia, changed its name to SpinMedia this March.)

"My thinking about print goes all the way back to Spin," Mr. Hansen said. "The way the editorial group was configured didn't make a lot of economic sense. It was a money losing proposition. … We couldn't figure out a way to make Spin work."

But Mr. Hansen never stopped thinking about creating a sustainable print model, he said. So when SpinMedia bought Vibe this April, Mr. Hansen proposed changing Vibe to a quarterly from a bi-monthly.

The reduced schedule means Vibe will be less topical, but editors will strive to include more "evergreen" content and in-depth reporting, said Dale Strang, a consultant hired to oversee Vibe's transition. Each issue will also center around a particular theme, with the upcoming winter edition called "The Race Issue," he said.

The current issue is labeled Vibe's summer issue even though it is arriving after Labor Day. "By the time we kept delaying the summer issue, it turned into a fall issue," Mr. Strang said. It has three different covers: one with rapper-producer Pharrell and dance music duo Daft Punk, one with rappers Nas and J. Cole and singers Janelle Monae and Robin Thicke on another.

The anniversary issue will be 108 pages, including 38 ad pages. Mr. Strang said he expects subsequent editions to be at least 125 pages. 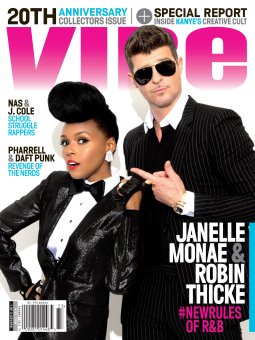 Another of the new Vibe's three covers

Mr. Hansen said he anticipates a slight profit from each issue, but said he'll continue printing Vibe so long as it breaks even.

"I think there are a lot of benefits to a print publication beyond P&L," he said, referring to profit and loss statements. "If you view it as marketing and another way to reach your audience, I think it's a pretty good way to get our message out."

Vibe said it is guaranteeing advertisers a paid circulation of 250,000 and that it has applied to be audited by BPA after withdrawing from the larger circulation auditor, the Alliance for Audited Media, earlier this year. Vibe's U.S. traffic has slightly declined since last year, from more than one million unique visitors in August 2012 compared to 843,000 this August, according to ComScore. Spin.com has more than doubled its traffic under SpinMedia, to more than one million U.S. unique visitors this August from 416,000 last August.

The new publishing schedule is not the first time Vibe has escaped apparent death. The magazine shut down in June 2009 only to come back months later with hip-hop artist Chris Brown on the cover.