From Agents to Nike, Ad World Inundates Knicks Phenom With Endorsement Proposals
READ THIS NEXT
Warner Bros.’ 2021 films to hit both HBO Max and theaters in move that rocks film and streaming industries

Nothing like a little Lin-amint to erase any lingering pain from a lockout.

Jeremy Lin hasn't done any marketing yet, but the sports-endorsement world is at the feet of the 23-year-old Asian-American pro basketball player who burst on the scene for the New York Knicks with a game -- and a backstory -- that has captivated the country.

Now brands want in on "Lin-sanity," and Mr. Lin's handlers are listening. 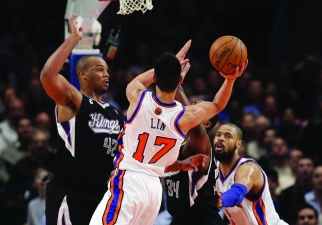 Lin's big news now, but someone else surely will be in a few months.

"We're talking a little bit of everything," Roger Montgomery, president of Montgomery Sports Group and Mr. Lin's agent, told CNBC Friday morning. (Mr. Montgomery did not return calls to Ad Age .) "A variety of categories. All the big ones, small, intermediate ... everybody is interested in Jeremy Lin."

Whether Mr. Montgomery's relatively small agency can handle the influx remains to be seen. Industry insiders said are more than brands reaching out: Sports-marketing firm IMG, the sports division of Creative Artists Agency, and the LeBron James-backed LRMR Marketing have all put out feelers about representing Mr. Lin's marketing, sports-marketing executives said. None of the three firms responded to requests for comment.

Right now, Mr. Lin has no endorsement agreements other than a small basketball-shoe deal with Nike . The marketer is reportedly planning a campaign around him.

On Feb. 3, Mr. Lin had just moved from his brother's couch to a teammate's couch and was desperately trying to hang on with his third NBA team this year. When the struggling New York Knicks made him point guard in a game against the New Jersey Nets, Mr. Lin exploded with 25 points and seven assists in a win. The next game, he was inserted into the starting lineup. The subsequent winning streak included a nationally televised, 38-point performance by Mr. Lin against Kobe Bryant and the Los Angeles Lakers.

"We know he has great buzz now in the right market for the right team, and not just to the Asian market but to mainstream America," said sports-marketing expert and Columbia University professor Joe Favorito. "If it continues and he is amenable, he is a ticket that Main Street can ride for a while."

Consider these numbers provided by the NBA and Google:

"As a basketball fan, I have to admit I have never seen anything like this," said Jim Lecinski, VP-U.S. sales and service for Google. "From a business perspective, this is a classic illustration of how nimble businesses can be with digital marketing. Lin-santiy has exploded practically overnight. The ability to get in front of interested consumers with relevant ads for your products -- in this case, sports gear and memorabilia related to Jeremy Lin -- is what online marketing is all about."

CrockTees.com, which is selling a "Lin-sanity" T-shirt via SpreadShirt.com, has seen its page views increase 400% and the daily conversion rate rise by 5%.

"Our average page views were maybe 200 a day, with a bump around the holiday. It's been almost 2,000 a day since "Lin-sanity' hit," said CrockTees President Tobin Jones.

"I hate to say this," said Mark Venezia, VP-global sales and marketing for SpreadShirt, "but a conversion rate of 4% to 5% is an insane number. And the hype really didn't start until about a week after Jeremy Lin became a starter."

Mr. Lin's success has also been driven by playing in New York and having his story hyped by ESPN, said John Rowady, president of Chicago-based sports-marketing firm Revolution.

"Let's put it this way," Mr. Rowady said. "The Detroit Red Wings have won 21 consecutive home games in hockey. Where's that story? And, oh by the way, does anybody even remember any more that the NBA season started late because of the lockout? This kid is creating a great storyline. He's in the right place at the right time."