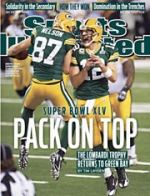 Soon you won't subscribe to the print edition without paying for digital editions too.

One year of the dead-tree edition, without the Android apps and web edition, was still available Friday for $39 at SI.com/subscribe. But that $39 print-only offer will go away soon, a spokesman confirmed, replaced by the $48 package that wraps up print and digital. "You're really buying a subscription to the brand, not a magazine," the spokesman said.

The idea is to offer a universal price for access to the brand on any platform you like. That will please the kinds of subscribers who've complained in the last year about being asked to pay again for their magazines' app editions.

The magazine industry has also been knocked for selling subscriptions cheaply and relying on advertisers to carry the real freight. Charging $48 instead of $39 will help Sports Illustrated get more revenue from its readers and theoretically reduce its exposure to advertisers' comings and goings.

But Sports Illustrated is making the transition at an awkward point in time. Many people don't own Android devices and don't care much about reading the magazine's web edition on their desktops. The magazine's full content is still free on its website anyway, albeit in a less attractive package than "All Access" offers. For those people, the cost of a new subscription to Sports Illustrated is going up almost 23% for no appreciable gain.

Extending the "All Access" plan to Apple's iPad, which eMarketer projects will comprise nearly 80% of tablet sales this year, would be a big help. But magazine publishers and Apple still haven't found a mutually agreeable way to sell iPad edition subscriptions, so that's off the table for now. Maybe Sports Illustrated will be able to at least secure a deal like People magazine has, under which Apple lets People's existing print subscribers get People's iPad edition at no extra charge.

Sports Illustrated's existing print subscribers are getting free access to the digital package as well for the remainder of their current subscription.