Site Says It Knows What Fans Wants
READ THIS NEXT
‘America Must Change’: The story behind Time’s latest cover artwork

In August of this year, three-year-old sports site Bleacher Report closed a $22 million funding round, bringing its total to $40 million. The news came a few months after the startup hired CBS Interactive ad sales veteran Rich Calacci as its chief revenue officer -- an acknowledgement that if the site were to have a real future, it would need a sales leader capable of luring real brand dollars.

In his new position, Mr. Calacci joined a young property that had already been the target of enough vitriol in journalism circles to last a lifetime. The accusations levied against the site by its detractors are myriad: the site games Google; it produces an abhorrent number of slideshows; and it doesn't pay the majority of its thousands of contributors because the majority of the content produced is not, in fact, worthy of payment. In an interview, CEO Brian Grey , formerly general manager of both Fox Sports Interactive and Yahoo Sports, addressed the naysayers.

"I think the biggest factor in all of this is a lack of understanding of what we do and how we do it," Mr. Grey said. They know what consumers want and let "the contributors know what that is so they can match that demand," he said. He noted the fact that 42% of Bleacher Report's traffic comes through search is proof that the site knows how to deliver what sports fans want. 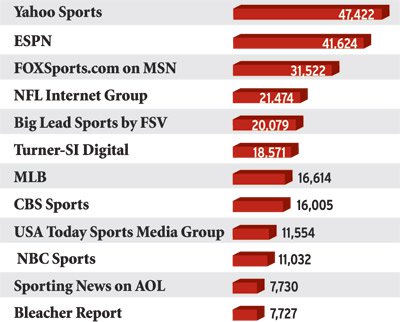 The site has continued to garner a significant audience, even if its reported traffic has been rather flat since the start of the year. In August, BleacherReport.com attracted 7.8 million unique visitors, according to ComScore, ranking it 12th among sports properties, just behind Sporting News on AOL.

In recent weeks, the site has featured advertising from brands such as Gillette, Powerade, Bacardi and Edge, Mr. Calicci said. Some major media buyers have been attracted to the site, in part, because of its bevy of content on just about any team you can imagine. Bleacher Report also offers customized email newsletters about individual teams.

"It's a much more authentic and localized view of sports and sports teams that you aren't necessarily going to get on other sports sites," said Carl Fremont, exec VP at Digitas, which buys ad space on Bleacher Report for a financial-services client.

Still, at least one brand has pulled its advertising over credibility concerns. CBS Interactive advertised its fantasy football products on Bleacher Report for a year, but chose not to renew its ad deal. Two people with knowledge of the relationship said CBS had concerns around its brand sitting alongside photos of scantily-clad women as well as insensitive editorial pieces such as the infamous slideshow, "Japan Earthquake and Tsunami: The Worst Natural Disasters in Sports History." Mr. Grey , however, says Bleacher Report is working to improve its editorial processes to safeguard against "inappropriate" content.

Doug Brodman, associate media director at MediaVest, said he works around such dangers by focusing on buying sponsorships around events whose coverage is predetermined. He said his buys on Bleacher Report and other indie sites such as SB Nation supplement his purchases on traditional sites such as ESPN and Yahoo Sports, but he thinks that breakdown could shift in the future. "Sites like Bleacher Report that emphasize the customization and localization of sports content ... will increasingly start to cut into share of advertising budgets going to the more "traditional' sports destinations online."