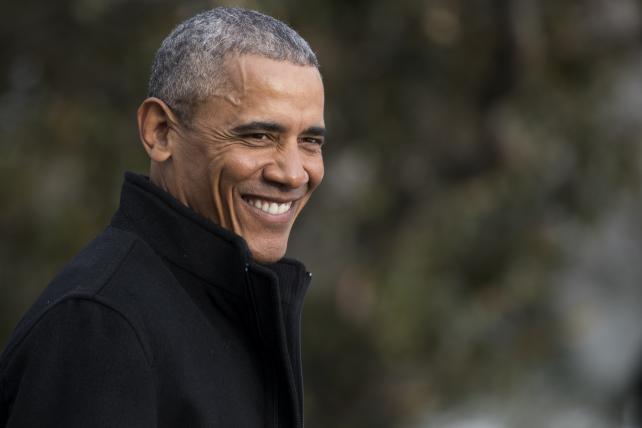 President Barack Obama walks to Marine One on the South Lawn of the White House on Jan. 7, 2017, in Washington.
Credit: Shawn Thew - Pool/Getty Images

It's "the end of the Marissa Mayer era" at Yahoo -- and what's left of Yahoo (after the sale of its core internet properties to Verizon) will have a curious new name: Altaba. Consult your doctor before taking Altaba. Side effects of Altaba may include...

Controversial Trump-aligned Breitbart News has lured The Wall Street Journal's John Carney to "lead a new finance and economics section set to launch soon after the Jan. 20th presidential inauguration," Bloomberg News reports. Carney will presumably bring some respectability to the site, which continues to be under fire (see The Verge's "Germany investigates fake news after bogus Breitbart story").

The "Hollyweed prankster" has been arrested. Zachary Cole Fernandez, who briefly rebranded Hollywood as "Hollyweed" by draping giant tarps over the Os in Tinseltown's iconic sign to turn them into Es, turned himself into the LAPD on Monday. The Los Angeles Times reports that the stoner folk hero is facing a misdemeanor trespassing charge, but was released on $1,000 bail and is slated to appear before the Los Angeles Superior Court on Feb. 15.

Spotify has posted an opening on the "Career Opportunities" section of its website for a new "President of Playlists" position. The daunting requirements for applicant(s) include "Have at least eight years experience running a highly-regarded nation" and "Someone with good team spirit, excellent work ethic, a friendly and warm attitude, and a Nobel Peace Prize." The BBC notes that President Barack Obama rcently joked that he wanted to work at Spotify after he wraps up his second term.

"Fighting accusations from members of Congress that it facilitated child sex trafficking, the classified advertising site Backpage.com abruptly closed its adult advertising section in the United States on Monday," The Washington Post's Derek Hawkins reports, "saying years of government pressure left it no choice but to shutter its most popular and lucrative feature."

Finally, the headline of an op-ed piece in this morning's New York Times is written in Trumpspeak: "Trump, Trapped in His Lies, Keeps Lying. Sad!"