'The Cost Is Basically a Guy With a Microphone,' Analyst Says
READ THIS NEXT
Billie Eilish stars in a gorgeous rallying cry for the ‘generation that lives online’ 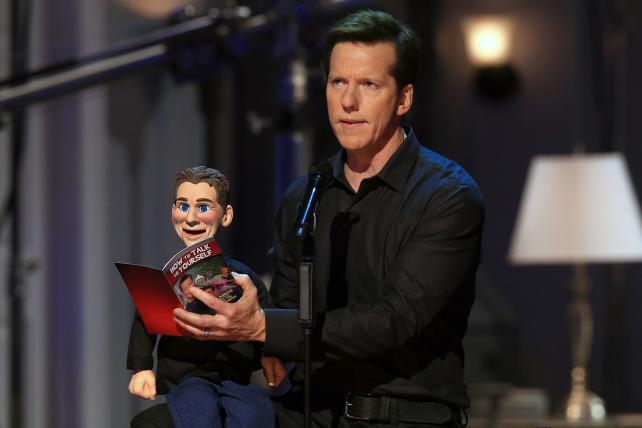 On Sept. 17, NBC broadcast a one-hour special featuring comedian and puppeteer Jeff Dunham. Stand-up, once the five-minute fare of late-night talk shows, had jumped to a big block of network prime time. What's more, it went up against NFL football, about the only thing left on TV that consistently dominates ratings like a 1970s miniseries.

Mr. Dunham did pretty well. While CBS's Thursday night NFL package drew almost 12 million viewers, according to Nielsen, Mr. Dunham's performance -- known in the stand-up business as "an hour" -- won almost 7 million, roughly 5% of every U.S. TV that was switched on at the time. "It does not get any better than this,"he told the cheering crowd. "We're here tonight because my act has taken me places I never thought possible."

As networks, cable companies, and streaming video platforms try to support a raft of expensive scripted shows, they're looking to stand-up comedy for that magical, money-making creature Silicon Valley calls a unicorn. Its audience is growing, and the economics of the genre are ridiculously good.

Think of it this way. Scripted drama, with teams of writers, trailers full of makeup people, and squads of union camera crews clustered around elaborate sets, is like a massive factory cranking out a complicated product. Stand-up is the slick social app cooked up over Negronis in a co-working space. In a word, it's cheap. And there is no telling how big its market may be.

"The cost is basically a guy with a microphone," said Vasily Karasyov, a senior analyst at CLSA Americas. "It's perfect for companies that just constantly need new content."

Long-form stand-up has been on TV for decades but mainly on cable channels such as Comedy Central. More mainstream offerings typically involved taking a comedian from stage to sitcom. That's what happened with Bill Cosby, Jerry Seinfeld, Roseanne Barr, and Ray Romano. Increasingly, though, entertainment executives are finding that a mic and a stool will do.

The genre has been a particular boon for such streaming platforms as Amazon and Netflix, ever eager to lure new subscribers and keep the ones they have. Original series such as "Transparent" on Amazon and "House of Cards" on Netflix have been critical coups and lured countless TV fans away from cable and network channels. But they come at a sizable cost. An hour of scripted drama, on average, costs about $3 million to produce. Netflix often spends a bit more than that, and HBO paid roughly $6 million per episode for its first season of "Game of Thrones."

As a result, all that drama and action often don't come with a happy financial ending. Streaming platforms generally don't share audience numbers, but the 199 original series on cable TV last year show how difficult it is for content to reach a critical mass. Only six of the shows averaged more than 3 million viewers in the 18-49 age range, generally the number required for a show to break even.

So TV producers have been turning to comedians to keep their audiences entertained and help finance their more expensive fare. It's the same kind of low-cost, high-return strategy that launched the game-show boom and, later, reality fare.

Nielsen doesn't break out the stand-up comedy market by category, and such outlets as HBO and Amazon are stingy with their data. But something's going on. Judi Brown-Marmel, a partner in the agency LEG who helped sell the Dunham special to NBC, estimates that the volume of stand-up on broadcast networks, cable channels and digital platforms has tripled in the past five years. And the market still isn't saturated.

"Let's put it this way. There's a bigger appetite right now than there are people to pull off the performances," she said.

Netflix isn't backing away from big dramatic productions, but it is ramping up its stand-up. Last year the company premiered seven original stand-up specials; this year it will stream 12, including five in the next three months. Chief Communications Officer Jonathan Friedland said stand-up works well on the platform because performances aren't broken up by commercials and the company's recommendation engine helps comedy fans discover performers they may never have heard of. A fan of the "Rush Hour" films might watch the new Chris Tucker special and click through to Iliza Shlesinger's "Freezing Hot."

While the specials don't lure new subscribers on the scale of "Daredevil" or "House of Cards," they do make for more loyal and passionate members, according to Mr. Friedland. "Our audience for comedy loves that we give them a steady diet of new stand-up from comics both known and not terribly known," he said. In the coming months, Netflix plans to start buying specials featuring foreign comedians as it expands abroad.

Showtime has been increasing its stand-up spending for about seven years, adding specials for Nick Cannon, Dane Cook, and Tig Notaro. Its target now is one a month, said Gary Garfinkel, co-head of content strategy and acquisition.

"It's a category of programming that's absolutely blowing up," Mr. Garfinkel said. "And while there may be a leveling off, I don't think stand-up is going to decline."

It isn't uniformly cheap. With A-list talent, Netflix is often bidding against HBO, FX, Showtime and others. "The thing about the market is, it is a market," Mr. Friedland said. "There is a clearing price for all of these things. That's been good for the comedians." Several people interviewed for this story, while declining to be more specific, said top performers are commanding around $5 million for a one-hour TV special. That's "Game of Thrones" money.

As the market has gotten more crowded, HBO has actually scaled back on stand-up. This year it will offer only four comedy specials, down from 10 in 2006. But the payoff has been hefty. HBO's Katt Williams speciallast year has garnered 8.2 million views, according to spokesman Jeff Cusson.

There's a long tail of far cheaper options. For every Kevin Hart, there is a handful of comics like Sebastian Maniscalco. He might not be able to pack the Barclays Center, but his first Showtime special performed so well that the company bought his second on spec.

Ultimately, comedy, like computer science, is a market of human talent: When demand is high, the value of every worker appreciates in step. A blockbuster deal for Aziz Ansari, in some small way, also helps a comedian such as Nore Davis.

Mr. Davis has the type of career that simply wasn't possible 20 years ago, when comedians were mostly praying for a call from Letterman. He spent August in Los Angeles writing for an MTV pilot. In September, he did 27 stand-up sets in clubs and at colleges. In the coming months, his second comedy album will hit iTunes, and he'll continue taking small roles in sitcoms and sketch shows.

Mr. Davis is heartened by the string of stand-up pals who have hit the big time. Michael Che is running "Saturday Night Live's" Weekend Update. Hasan Minhaj just landed a "Daily Show" gig. And then there's Amy Schumer, the LeBron James of comedy at the moment, and an old pal of Mr. Davis.

"There are a lot of opportunities to make money right now," Mr. Davis said. "Even without being famous, you can easily make the salary of a teacher or a cop, just for telling jokes."