Star Wars Day, May the Fourth, began as a tradition back when lightsabers were the domain of hopeless nerds and new content dribbled out every few decades. This time, though, it runs right into the promotional cycle for the installment in Disney's increasingly active Star Wars release cycle: "Solo: A Star Wars Story" arrives May 25 to tell the backstory of the eponymous scruffy-looking nerfherder and former Imperial, long before he got wrapped up in that whole Skywalker mess.

With the fan base larger than ever, brands can't wait to show that they're just as excited about the latest addition to the canon of Lucas as the most dedicated cosplayer of the 501st Legion. Here's what some of them came up with. 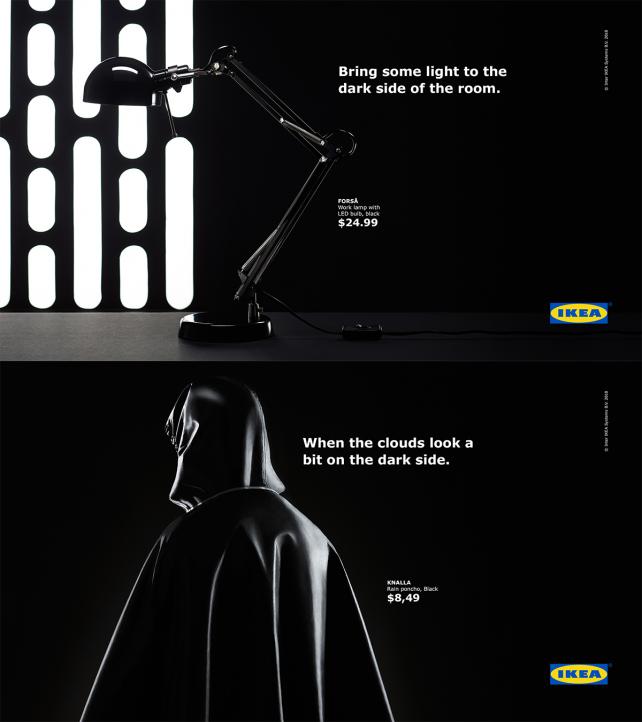 Acne used a couple of Ikea's household offerings as Star Wars stand-ins. The Vader-esque Knalla rain poncho comes in shiny black, perfect for keeping out the rain (or sand, if moisture is rare where you're from). Remember to throw in an oscillating fan to get the voice right. And a Forsa work lamp lights up the dark side of a room faster than a couple of proton torpedoes down a thermal exhaust port.

With Ikea's huge catalogue, though, the options seem lacking. Surely there's a white trashcan somewhere that would make a suitable R2 unit (and the Gigantisk is a perfect Gonk droid). Maybe a brown shag carpet in the co-pilot's seat, and a Kanellbullar cinnamon bun over each ear?

Since half the cast of Episode IV was British, it's only fair that Londoners got an exclusive peek at some new routes out of Heathrow today. As usual, Hoth has ice on the runway, but the flight to Endor is running on time. (Maybe its moon is only served by local carriers?) No crossbows allowed on the flight to Kashyyyk, but bowcasters are probably fine.

Of course, the newest Star Wars film gets a promotional boost, too. Purists may cringe at the thought of the inevitable Star War crossover, now that it's a Disney property, but "Solo" director Ron Howard brings a welcome dose of levity to the galaxy far, far away with a spot-on narration of the plot to "A New Hope," done in the style of "Arrested Development." It's actually pretty tough to say which family is more dysfunctional, the Skywalkers or the Bluths, though blowing up a planet probably ranks worse than some "light" treason. Maeby.

Jack in the Box has a twofer ready for National Space Day, which fell on May 4 this year, and it announced it in true Star Wars style--with a yellow text crawl.

Jackboxicus Major is a new constellation in the shape of the fast food chain's mascot's head. (What do you mean it's not a real constellation? It looks a lot more like Jack than Cassiopeia's big "W" looks like a queen.) Dreamt up by David & Goliath, each star that makes up Jack was actually logged with the International Star Registry, tagged for (hopefully not) eternity with the names of JitB food items, like Hash Browns or Chicken Fajita Pita.

Just remember this when the aliens who live around these stars come to "serve" us. We'll deserve it.

And Denny's is continuinh its "Solo" campaign with a website that lets fans roll a pair of realistic smuggler's dice, like the kind Han used to win the Millennium Falcon. (It's called cheating.) The site follows the "Hand of Sabacc" spot from last month, which, like this activation, was created by agency EP & Co.

Players who actually manage to match symbols on their dice rolls can win prizes including free Denny's food and movie tickets, as well a shot to land the grand prize, a poster signed by the stars of the film.